Marikina now under state of calamity 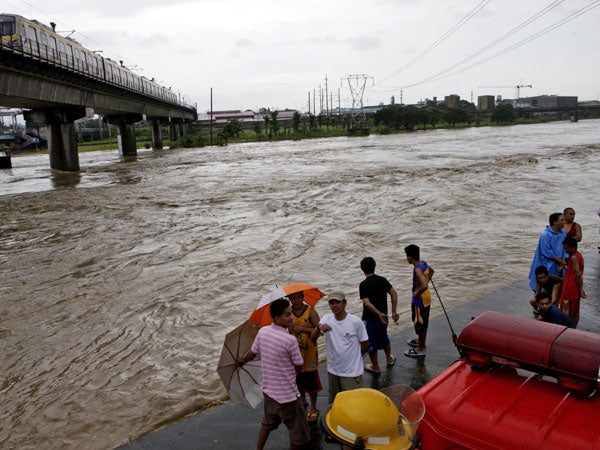 Residents look at the swollen Marikina River in Marikina city, east of Manila, Philippines, Tuesday, Aug. 20, 2013. Flooding caused by some of the Philippines’ heaviest rains that submerged more than half the capital began receding Tuesday, but authorities evacuated thousands of residents along Manila’s overflowing rivers and braced for more chaos in outlying provinces. AP

MANILA, Philippines — Marikina has been placed under a state of calamity on Wednesday following floods caused by storm-enhanced monsoon rains, the city government said in its Twitter account.

Over 17,000 residents near the Marikina River were evacuated after the waters reached a19-meter critical alert level on Tuesday night but which gradually subsided Wednesday morning.

A critical level calls for enforced evacuation of nearby residents.

The city officials also suspended classes in all levels for both public and private schools in Marikina Thursday and Friday.

“Our brothers and sisters in the evacuation centers (5,958 families or 29,334 persons) need our help in terms of food, clothing, and other relief items. Donations in cash or in kind will be greatly appreciated and warmly received at the Marikina Sports Center. Look for Dr. Totoy Llabres,” the Marikina PIO said.