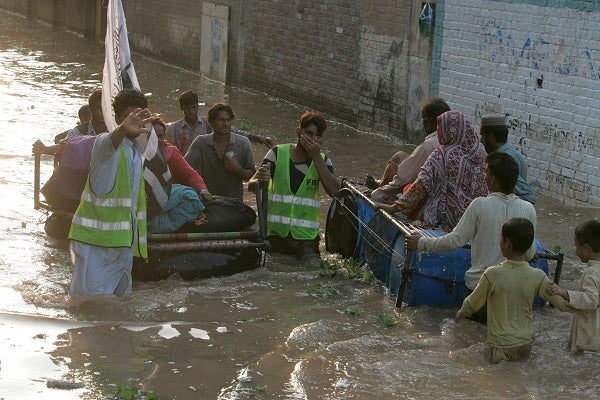 Volunteers of Pakistani religious group of Jamaat-ud-Dawwa help stranded villagers to move to safer ground in suburbs of Lahore, Pakistan, Tuesday, Aug. 20, 2013. Hundreds of villages were submerged and acres of crop land were destroyed due to high floods in rivers. According to government officials, dozens of people have died and over 100,000 people have been affected by flood-related accidents this month, mainly in urban areas. (AP Photo/K.M. Chaudary

He said that the rains had hit 3,826 villages and destroyed 13,262 houses all over the country.

Further heavy monsoon rains are expected in Pakistan next month, but the NDMA is fully prepared for any eventuality, he said.

Pakistan, which has suffered from monsoon floods for the last three years, has been criticized for not doing more to mitigate against the dangers posed by seasonal rains washing away homes and farmland.

Streets in all major cities including Karachi, Lahore and Islamabad suffer intermittent flooding due to downpours, damaging roads and private homes.

In 2010, the worst floods in the country’s history killed almost 1,800 people and affected 21 million.