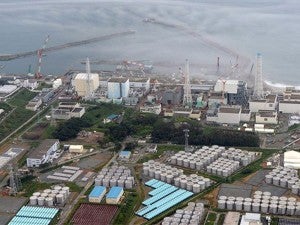 TOKYO – Japan declared a radioactive water leak at the crippled Fukushima plant a level-three “serious incident” Wednesday, its highest warning in two years, as operators scrambled to seal a tank that has seeped 300 tons of toxic water.

The leak is the worst since the nuclear crisis began in March 2011, when a quake-generated tsunami knocked out reactor cooling systems and sparked meltdowns.

“Something that we were very much concerned about has occurred,” Nuclear Regulation Authority chairman Shunichi Tanaka told a meeting in Tokyo. “We are in a situation where there is no time to lose.”

The regulator raised the assessment on the United Nations’ seven-point International Nuclear Event Scale (INES) to a level three “serious incident,” from level one which indicates an “anomaly.”

At its height, the Fukushima crisis was classified as level seven – one of only two events ever rated in that category along with the Chernobyl disaster a quarter of a century ago.

Other incidents which have been ranked level three include the 2005 radioactive waste leak at the British nuclear reprocessing facility in Sellafield.

The Japanese regulator will now inform the International Atomic Energy Agency about the leak and consult with the UN body over the accuracy of its assessment, officials said.

The evaluation came a day after plant operator Tokyo Electric Power Company (TEPCO) said some 300 tons of radioactive water was believed to have leaked from one of the tanks that hold water used to cool the reactors.

TEPCO said the leak was thought to be continuing on Wednesday and it had not yet pinpointed the source, but that there were no significant changes in radiation levels outside the plant.

“We are removing the soil contaminated with the leaked water, while sucking the remaining water from the troubled tank,” a TEPCO spokesman said.

“We are also hurriedly checking if similar troubles happen to some 350 tanks of the same type,” he said.

“We are trying our best not to spread the contamination to areas outside the facility, including the sea,” the spokesman added.

On the Tokyo Stock Exchange, shares in TEPCO plunged 9.28 percent to 557 yen in the wake of the latest assessment, even as the benchmark Nikkei index closed 0.21 percent higher.

TEPCO has faced a growing catalogue of incidents at the plant including several leaks of radioactive water, as it grapples with the world’s worst nuclear disaster in a generation.

The company – which faces huge clean-up and compensation costs – has struggled to handle a massive amount of radioactive water accumulating as a result of continuing water injections to cool reactors.

The embattled utility in July admitted for the first time that radioactive groundwater had been leaking outside the plant. This month it started pumping it out to reduce leakage into the Pacific.

Prime Minister Shinzo Abe in early August described as “urgent” the battle to stop radioactive water from escaping into the ocean.

The problems have led the Japanese government and its nuclear regulator to say they would become more directly involved in the cleanup at Fukushima, rather than leaving it to the much-criticized operator.

“Problems with contaminated water have emerged one after another,” Kenzo Oshima, a Nuclear Regulation Authority commissioner, told Wednesday’s meeting.

“TEPCO has been struggling and is likely to continue to do so from now on,” Oshima said.

“The Fukushima water leak has been reported internationally, which is no good for the reputation of the country,” the former diplomat said.

While no one is officially recorded as having died as a direct result of the meltdowns of Fukushima’s reactors, large areas around the plant had to be evacuated. Tens of thousands of people are still unable to return to their homes.