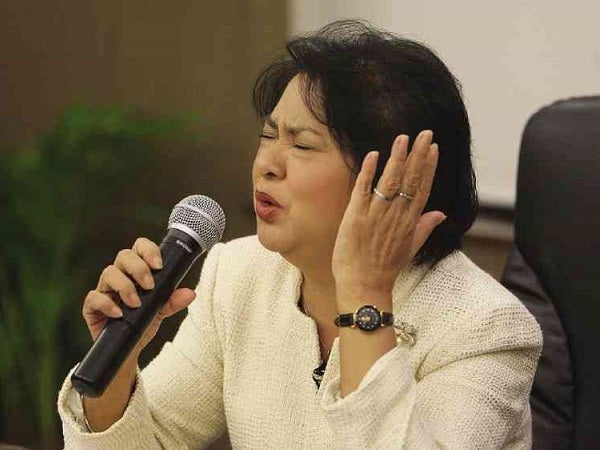 ‘KAHINDIK-HINDIK’ (APPALLED) COA Chair Grace Pulido-Tan describes her reaction with a grimace on learning how the PDAF had been repeatedly abused by members of the two Houses of Congress. MARIANNE BERMUDEZ

Commission on Audit (COA) Chair Grace Pulido-Tan said this on Friday as she confirmed that 10 nongovernment organizations with links to Napoles illegally got hold of P2.157 billion of the legislators’ pork barrel funds between 2007 and 2009.

The name Janet Lim-Napoles “is not new” in the pork barrel circuit, Tan said when she on Friday announced the results of the COA Special Audit of the pork barrel for the three years during the previous Arroyo administration. Because of the tedious process, the audit took three years to complete, she said.

The COA report said that between 2007 and 2009, the Department of Budget and Management (DBM) released the following amounts: about P101.6 billion for various infrastructures including local projects (VILP); P12 billion for Priority Development Assistance Fund (PDAF) projects; and P2.36 billion for financial assistance to local government units (LGUs); and budgetary support for government-owned and controlled corporations (GOCCs).

All of these amounts went to projects identified by individual legislators.

The funds are included in the national budget each year as a lump sum appropriation for the various projects identified by senators and congressmen. Those under the VILP are described as “hard projects” under the category of public works.

Those under the PDAF are described as “soft projects” under the category of education, health, livelihood, social services, financial assistance for propoor programs of the government, cultural projects and small infrastructure projects like irrigation, rural electrification, water supply, housing and forest management.

According to Tan, P6.156 billion, sourced from the PDAF of 12 senators and 180 representatives, were transferred by the different agencies to 82 NGOs.

“Ten of the NGOs, which received a total of P2.157 billion, are presently linked to Janet Lim-Napoles,” Tan said.

Six other NGOs, which got P189 million, involved legislators whose PDAF was transferred to the NGO, or a relative of the legislator, as incorporator or officer.

While the audit covered only the years 2007 to 2009, Tan said the COA auditors were able to identify the NGOs that were identified in the Inquirer series (of articles on irregularities in the use of the pork barrel funds) as having been used by Napoles to siphon off sizeable amounts from the pork barrel of senators and congressmen.

“There are names of NGOs that are coming up here that are linked to her name,” Tan said.

Napoles has been accused of masterminding a P10-billion pork barrel scam through the use of 22 bogus NGOs. Her cousin Benhur Luy and five other former employees of her JLN Corp. blew the lid on the scam after Luy was kidnapped, allegedly by Napoles.

Napoles is now on the run after a Makati court issued a warrant for her arrest as well as for her brother, Reynald Lim, on charges of serious illegal detention.

Tan said the Napoles’ name had also cropped up in the investigation of the P728-million fertilizer fund scam of 2004.

“In the fertilizer fund scam in 2004, her name had come up. She has a notice of disallowance,” Tan said.

She said Jo-Chris Trading, apparently named after one of Napoles’ daughters, Jo Christine, was one of the biggest suppliers for the fertilizer fund projects.

Tan said it was “providential” that there are media reports coming out on the pork barrel scam, as they somehow also validate the results of the COA audit.

She cited the Inquirer report on the Supreme Court decision upholding a Court of Appeals ruling holding four officials of Vicente Sotto Memorial Hospital in Cebu liable for the misuse of P3.38 million from the pork barrel of then Cebu Rep. Antonio Cuenco in 2004.

“It just takes some time (but somehow) justice catches up,” Tan said.

The COA chief said it was “good timing” that when the media reports of the Napoles scam came out, the agency had already finished the audit.

“Everyday I would read the papers, it seems to validate what we found. This was providential that things are happening this way,” she said.

One of the salient findings of the audit was that the implementing agencies simply transferred the funds to the NGOs identified or selected by the legislator and not through public bidding as required in the government procurement policy, and then barely monitored the projects, said Tan.

She said many of the NGOs were of “dubious existence.”

“They were either unknown or could not be found at their given addresses, or have given nonexistent addresses, or were traced to mere shanties or high-end residences which turned out to be residences of their owners/officers,” she said.

“The procurement of alleged goods and services by the NGOs aggregating to billions of pesos was not made through competitive bidding. Many suppliers are the same for most of the NGOs,” Tan said.

She said some NGOs even used P123 million of the funds for payment of salaries and other administrative expenses.

Napoles won’t say name of her firm in Indonesia

Napoles: Benhur Luy has another boss, it is not me

Read Next
CA freezes Napoles’ 40 bank accounts
EDITORS' PICK
Acer Philippines welcomes you to its first flagship store
DND sees AFP gaffe in UP Red-tagging
US health officials: More data needed on UK variant warning
New Year, New Rediscoveries
Is your company a growth champion? Stand up and be recognized!
DOH reminder: Covid-19 vaccine ‘not a magic pill’
MOST READ
DND sees AFP gaffe in UP Red-tagging
Parlade targets universities after fiasco with beauties
Dustin Poirier knocks out Conor McGregor at UFC 257
Why Kris Aquino sleeps with her pearls
Don't miss out on the latest news and information.