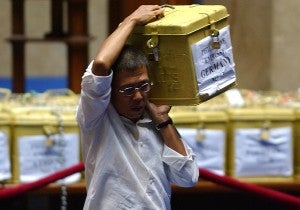 MANILA, Philippines – Seventy-four lawmakers got more than their share of the Priority Development Assistance Fund by “hundreds of millions” from 2007-2009, the Commission on Audit disclosed Friday.

In a televised press conference, COA Chairperson Gracia Pulido-Tan the 74 legislators, whom she didn’t name, “significantly exceeded” their allocations of P200 million for senators and P70 million for congressmen. (INQUIRER.net has uploaded the complete report for our readers’ reference)

Tan released the report in the wake of the controversy allegedly involving several lawmakers and government officials and businesswoman Janet Lim-Napoles, the alleged mastermind in a scam concerning the release of billions of pesos of pork barrel funds to bogus nongovernment organizations (NGOs).

According to the COA’s special audit report on the PDAF and Various Infrastructure including Local Projects (VILP), former Representative Manuel “Way Kurat” Zamora exceeded his PDAF allocation by P2.998 billion in 2007 and P11.6 million in 2008.

The almost P3 billion release in 2007 was intended for the “implementation of projects nationwide” as mentioned in a Special Allotment Release Order (SARO) to the Department of Public Works and Highways.

Pulido-Tan also pointed out that there were projects implemented outside legislative districts.

Zamora, for example, had asked for the implementation of projects nationwide while Representative Edcel Lagman who represents Albay had P60.5 million-worth of projects in 28 barangay (villages) in Quezon City. He also allocated P20.5 million in Nueva Ecija and P5 million in Pampanga.

Senator Cynthia Villar, who was then Las Piñas representative, also had a nationwide project while former Tarlac Rep. Monica Louise Prieto-Teodoro requested for a project in Manila.

The six senators who exceeded the P200 million PDAF allocation per year were (in alphabetical order):

The 68 congressmen who exceeded P70 million were (in alphabetical order):

P1-B pork of 13 solons ended up in JLN firms