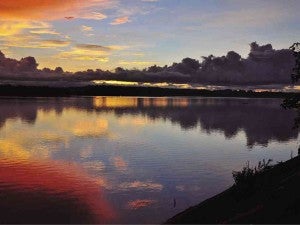 THE SUN sets at the Cagayan River in Barangay Catayauan in Lal-lo town, Cagayan province. The river provides irrigation to vast tracts of land and has become a rich source of marine life, making Cagayan Valley the country’s food basket. MELVIN GASCON

People in Barangay (village) Catayauan in Lal-lo, Cagayan province, are agitated whenever they hear news of another weather disturbance forecast to hit northern Luzon.

The community of about 30 households that line the thinning patch of land between the national road and the Cagayan River has every reason to worry, as a minor swelling of the river would submerge, or worse, even erode and gobble up the houses.

Now, the river has come even menacingly closer at nearly 3 meters from the nearest house. During a recent typhoon, a mother described how she was traumatized seeing her backyard pigpen being swallowed by the river.

This was not the same landscape they woke up to everyday last year.

“Before, we had about more than a hectare of open land at the banks of the river below, which we planted with corn and vegetables. It would take us about 10 minutes to walk down to the nearest flow of the river,” said Femely Malana, 37.

For Catayauan, as well as the rest of the province, the Rio Grande de Cagayan—the longest river system in the country—has of late assumed a new character. From a majestic body of water that for centuries symbolized their social, cultural and economic well-being, it has morphed into a massive monster that ravages their existence every time natural calamities strike.

It is in this reality that the government tries to redirect its efforts into further harnessing the river’s wealth and potentials but, at the same time, taming its viciousness and lessening the harm it inflicts on people in times of calamities.

One such venture is Project ReBUILD, which the government, through the Climate Change Commission (CCC) and with funding and administrative assistance from the New Zealand Aid Program (NZAP) and the United Nations Development Program (UNDP), launched last month.

“ReBUILD” stands for “Resilience Capacity Building for Cities and Municipalities to Reduce Disaster Risks from Climate Change and Natural Hazards.” Proponents say it aims to “improve the governance framework of the Cagayan River basin.”

The significance of the Cagayan River basin to the people of Cagayan Valley cannot be overemphasized. For many centuries, it has been the lifeblood of the region, providing irrigation to vast tracts of land, and has become a rich source of marine life, making it the country’s food basket.

With a drainage area of about 29,000 square kilometers, the river meanders for about 500 km through the provinces of Nueva Vizcaya, Quirino, Isabela and Cagayan, and into the Babuyan Channel up north in Aparri, Cagayan. From its headwaters in the Caraballo mountains in Nueva Vizcaya, it is fed by major tributaries originating from the watersheds of the Cordillera in the west and Sierra Madre in the east.

Aside from its role as a major irrigation source, the Magat River, its biggest tributary, provides about 300 megawatts of electricity to the Luzon power grid. The Pinacanauan River in Cagayan and the Chico River in Kalinga province are best known as ecotourism destinations.

Heherson Alvarez, CCC commissioner, said the river brought in what would be considered “civilization” to this northern region as it became the gateway for Spanish conquistadores to introduce Christianity in the 17th century. It won for them the hearts and minds of the people in Cagayan and ingrained Catholic religiosity deep into the consciousness of the Ybanag.

Perhaps the best evidence to the important role the river plays in the lives of Cagayanos is the fact that the ancient baroque churches in the province face not the highway but the Cagayan River.

And just like any beautiful love affair, the Cagayanos’ romance with the mighty river has been expressed in their native songs and poetry.

But environmental degradation has taken its toll on the Cagayan River. Forest denudation at the watersheds has greatly depleted its water flow, and soil erosion has clogged and heavily silted its waterways.

What follows is massive flooding, especially during heavy rains brought by typhoons, as siltation has made the river shallower and has caused it to swell and inundate communities and farmlands, destroying crops, damaging infrastructure and even taking away lives.

Data from the National Disaster Risk Reduction and Management Council (NDRRMC) showed that for the past decade, Cagayan Valley had incurred the highest cost in total damage from natural calamities among the five regions in Luzon, amounting to P945.5 million.

Recent government efforts, such as a river dredging project, have been met with skepticism among locals, arising from allegations that the project was being used as a smokescreen for illegal black sand mining operations by foreign companies.

With Project ReBUILD, Alvarez hopes that stakeholders will be able to put an end to the traditional but generally ineffective “piecemeal” approach to disaster mitigation that the government used to address the problem of climate change.

“We used to have projects that were bound by political boundaries and fail to take a holistic approach to disaster mitigation. Hopefully we can correct that with Project ReBUILD,” he said.

For one, the three-year project seeks to undertake a study to help planners identify the weaknesses of government responses to disasters, such as earthquakes, flooding and soil erosion caused by prolonged rains, Sering said in a statement posted on the CCC website.

“The results of the project studies will be used in creating [disaster] mitigation actions, such as early warning systems and integrated contingency planning, mobilization and reengineering of [public] infrastructures,” she said.

The project also aims to prepare the local government to respond and adapt to disaster changes, and to provide mitigating measures, like warning systems and contingency plans, as well as revisions in the design of public infrastructure, Sering said.

Bonifacio Cuarteros, provincial disaster risk reduction and management officer, said Tuguegarao and the towns of Enrile, Iguig, Amulung and Alcala, which were identified as hazard areas, would undergo screening and assessment by Project

Two of the five areas will be chosen for actual implementation, based on the local government’s technical and logistical capability to respond to demands of the project, Cuarteros said.

“The main objective of this project will be the creation of hazard maps and the formulation of plans on how the local government can respond, as well as how to integrate these hazard maps into their development programs,” he said.