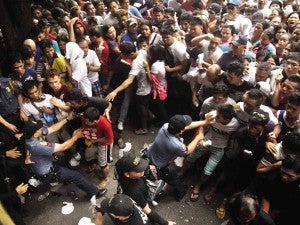 DEMOCRACY UNDER PRESSURE Policemen move in to control the crowd and prevent a stampede of voter registrants—many of whom have waited in line for hours—surging toward the Commission on Elections office in Arroceros, Manila, to beat the last day of registration for the barangay and Sangguniang Kabataan elections scheduled on Oct. 28. The unexpected number of people seeking to register as voters has puzzled and surprised the Comelec. EDWIN BELLOSILLO

MANILA, Philippines—Elections Chairman Sixto Brillantes Jr. admits to being baffled by the deluge of voters wanting to register for the Oct. 28 barangay (village) and Sangguniang Kabataan (youth council) elections.

Brillantes said Comelec officials are trying to determine whether those who joined the long lines outside the Comelec offices on Wednesday—there was a reported stampede in Manila—to beat the deadline were actual first-time voters or if they were transferees that were being “herded” in by the candidates.

And because the Comelec en banc suspected that some wily candidates may have been behind the large turnout, it decided not to extend Wednesday’s deadline, Brillantes said.

“There is something wrong. Why are there so many registrants when we just finished an election less than two months ago?” he said.

“We already have 52 million registered voters. Why would [the number of registrants] increase by so much? There’s no reason why there should be so many registrants,” he said.

Brillantes dismissed suggestions that the Comelec did not deploy enough personnel or that its computers had a problem.

“That’s not true. Our computers can handle this (but) there’s just too many people trying to mess things up,” he said.

The Comelec earlier said that it expected around two million voters “aged 15 and above but below 18 years old” to register for the SK elections.

“Our expectation was that many would register for the SK but not regular voters above 18. But look at the lines (yesterday). Do they look like they are voting for the SK? They’re not,” Brillantes said.

“They look like regular voters. What’s this? Didn’t they vote last May?” he added.

He said many of those who braved the rains in Metro Manila may have wanted to transfer to another precinct to vote for the barangay candidate of their choice or erroneously believed that they needed to register again.

“The problem could be that they wanted to transfer to another barangay so that they can vote for their barangay captain (but that) is not allowed because you won’t have the six-month residency requirement if you start moving only now,” Brillantes said.

“So they will all be rejected. We will check whether these are transferees or new registrants. If they are new registrants, we have a big problem,” he added.

Brillantes pointed out that 52 million voters already registered for the national elections in May.

“Why then would we have this many registrants above 18 (years old)? If they are transferees, meaning they voted on May 13, why would they transfer when it is just July?” Brillantes said.

He explained that, under Comelec rules, transferees should stay in their new residence for six months before they can change precincts.

“But it hasn’t been six months (since the May elections). It’s just more than 60 days,” Brillantes said.

He said that if it turned out that most of those who joined the queue for the SK and barangay poll registration were transferees, it could mean that they were herded into the election offices by candidates for the barangay elections.

“That’s why we don’t want to give an extension anymore. We will even shorten it if they try to mess things up,” Brillantes said.