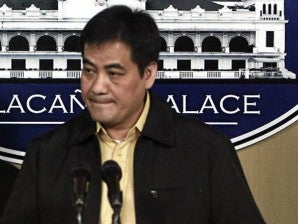 Presidential spokesman Edwin Lacierda said this in a nutshell to recognize the inherent right of the media to independently look into perceived anomalies in government.

“These are the media … These are the outfits that are doing investigative reporting,” Lacierda said, referring to the Inquirer and other media organizations that have been reporting about the alleged P10-billion pork barrel scam.

“That’s the function of media. They want to investigate, you are free to investigate. We are in a democracy. If you can talk to those people (whistle-blowers), it’s up to you. But, as far as we are concerned, we will rely on the investigation of the NBI,” said Lacierda.

The Inquirer has been running a series of reports on the inquiry being conducted by the National Bureau of Investigation on the alleged funneling of lawmakers’ pork barrel, officially called the Priority Development Assistance Fund (PDAF), into kickbacks using dummy nongovernment organizations (NGOs) said to have been formed by businesswoman Janet Lim-Napoles.

The Inquirer has also reported on other questionable PDAF releases, including the procurement of antidengue solution which later turned out to be a garbage deodorizer, in 2011. The “Effective Microwealth Probiotics” was provided by Innsbruck International Trading to four towns in Rizal province and in Polillo in Quezon province at a cost of P20 million. The program was funded by Sen. Lito Lapid’s PDAF.

Lacierda said he would not know if—or why—the media were releasing names of politicians linked to the pork barrel scam on a piecemeal basis.

“I don’t (know). We are not privy to what they are doing,” Lacierda said.

Denying any cover-up in the investigation of the NBI, Lacierda said the President’s instruction to the bureau was clear: “Probe everything.”

Lacierda also expected Agriculture Secretary Proceso Alcala to defend himself from allegation by Merlina Suñas, a whistle-blower, that his office was a key facilitator in funneling government funds to at least two dummy NGOs.

“We cannot talk (about the issue) since there is an NBI investigation. I think the whistle-blowers were called in to the investigation (Tuesday). I just saw it in the media,” he said.

“The NBI will be investigating thoroughly who the whistle-blowers (are). The bureau will invite (for questioning) those that need to be invited. So what I can say is that the NBI knows what evidence to look for. So … wherever the evidence leads to—we will pursue that,” Lacierda added.

Asked if he would advise Alcala to explain his side, Lacierda said: “I think he (made his) response to the media. He, in fact, did respond to it and, certainly, he will be open to explaining the situation. That’s not a problem for us,” Lacierda said.