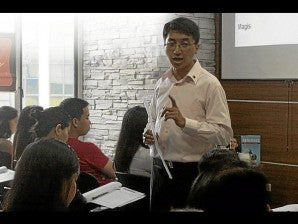 Public school teachers were not happy that they were made the poster boys and girls of the Department of Finance (DOF), which ran a print ad Wednesday showing that they were making more money than half of the lawyers and doctors in Makati City as what their tax returns showed.

“It only goes to show that teachers, while among the lowest-paid government professionals, are religiously paying taxes and those who dictate their income from clients in private practice pay less than we do,” said Benjo Basas, chair of  Teachers’ Dignity Coalition.

The ad published in newspapers showed 54 percent of all self-employed doctors, lawyers and, ironically, accountants in Makati City, the country’s financial district, paid less than P35,000 in taxes last year.

The amount was less than the P35,952 that the government collected every year from a public school teacher earning P21,500 a month.

The ad showed that there were 318 accountants who paid taxes last year in Makati. The top tax-paying accountant paid P4 million. The one at the bottom of the list paid just P120.

The ad also showed that one doctor paid P10 in annual income taxes last year. Another doctor paid P82.50 in taxes, less than the price of a cup of coffee in some shops.

One lawyer out of the 534 in Makati paid just P200 in taxes. Another paid P475, “a small amount compared to what lawyers usually charge their clients.”

“We are actually asking the government to reduce our taxes so we can have a bigger take-home pay,” said Alliance of Concerned Teachers (ACT) chair Benjie Valbuena.

Valbuena said it would be better for the DOF to ensure that big tax evaders, “including high-ranking government officials who receive big taxable bonuses,” were prosecuted.

“We pay high taxes because we are forced to. They should zero in and make an example of big businessmen,” he said.

Valbuena said the tax-exemption level for teachers had been pegged at P50,000 since 2008 “so any salary increases are just eaten up by taxes.”

The ACT chair said public school teachers were not happy paying taxes unless the taxable amount was lowered. “They should increase the tax exemption because it’s already outdated.”

Commissioner Kim Henares of the Bureau of Internal Revenue (BIR) said professionals who were not paying proper taxes should be ashamed of themselves.

The ad is part of the DOF and BIR’s weekly shame campaign against professionals who make as much as millions annually but contribute the least to government coffers.

“The goal of the campaign is to increase transparency in tax payments and to encourage people to be more conscientious in paying the right taxes,” the ad read.

The Philippine Medical Association (PMA) said it was closely working with the BIR to encourage its members to pay the right taxes.

“We believe that taxes are the lifeblood of this country,” said PMA president Leo Olarte.

He said the PMA and the BIR had conducted several tax information and education campaigns for PMA members to ensure that they can comply with their tax obligations.

“We are Filipinos first before we become doctors,” Olarte said.

He added that the group also supported the tax-reform program of President Aquino.

In an interview, Henares said self-employed professionals and entrepreneurs each pay an average of P12,000 a year in income taxes.

“That means your income is only P5,000 a month. That’s below minimum wage. How can you possibly live on that?” she asked.

She said the BIR believed that the average annual tax payment of self-employed professionals should be closer to P200,000.

Professionals still have a chance to amend their tax returns and pay the correct amounts before the government starts to build cases against them, Henares said.

“They should put it right. If they don’t, they take the chance that they will be investigated. Maybe not now, but sooner or later we will catch up,” she said.

The BIR chief said the government’s tax collection system of “self-assessment” presumed that all returns filed were correct. However, some signs were just too glaring to ignore.

For instance, Henares said tax payments of some lawyers, doctors and accountants were so small that it was as if they made less money than families under the government’s conditional cash transfer program.

The BIR uses various techniques to detect delinquent taxpayers under its Run after Tax Evaders program. One such method uses industry benchmarks to find which individuals or businesses pay less than the average annual taxes of their colleagues.

Another indirect method of detecting possible tax evaders is comparing the increase in a person’s net worth against the reported increase in that person’s income.

The BIR also compares the amount of money an individual spends in a particular year. If the money spent by one person is higher than the money he made, the BIR assumes that this person’s income was not declared properly.

Henares acknowledged that the process of bringing all suspected tax evaders to court could not go as fast as the government wanted.

“We have only 2,000 people who do investigations. How can we reach everyone?” she said, adding that the BIR hopes the weekly awareness campaign would contribute to higher collections from professionals.

Ordinary citizens can also do their part by patronizing only legitimate businesses that issue receipts, Henares said. She conceded that businesses that were not issuing receipts often offered cheaper prices for goods and services.

“But what do we want? As employees, our taxes are withheld from our salaries so we don’t have a choice. If we don’t do our own policing, we lose in the end,” she said.