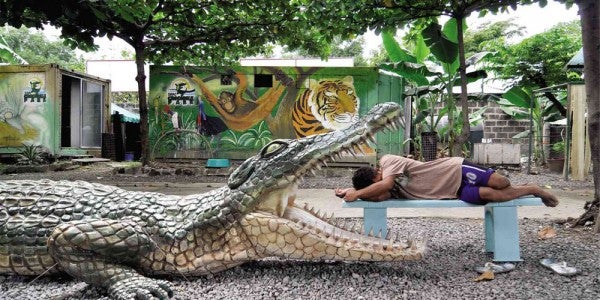 UNFAIR TO CROC Animal lovers say it’s unfair to compare the crocodile to greedy lawmakers who allegedly get hefty kickbacks from a syndicate that funnels their funds to ghost projects. Photo shows a zookeeper taking a morning nap beside a concrete replica of a croc at Crocodile Park in Pasay City. RICHARD A. REYES

Five senators and 23 members of the House of Representatives allegedly made available their pork barrel funds to dummy nongovernment organizations for purported ghost projects worth P10 billion over the past decade, according to affidavits submitted to the National Bureau of Investigation.

Sen. Ramon “Bong” Revilla Jr. topped the list of lawmakers who were said to have allowed the use of their Priority Development Assistance Funds (PDAF) to the scheme allegedly hatched by Janet Lim-Napoles, president and CEO of the trading firm JLN Corp., according to the documents secured by the Inquirer.

Revilla gave the syndicate access to his PDAF, or pork barrel, to dummy NGOs formed by Napoles and registered in the Securities and Exchange Commission in 22 instances; followed by Senators Juan Ponce Enrile on 21 occasions; Jinggoy Estrada, 18 times; Ferdinand Marcos Jr., four; and Gringo Honasan, once with a small amount.

Contrary to one newspaper report, Sen. Loren Legarda was not involved in the scam, said the principal whistle-blower, Benhur Luy, a former Napoles employee. “There was an attempt, but I heard she was dropped because she scrutinized it and she was very keen on receipts,” Luy told the Inquirer.

Topping the list of 23 House representatives is Rizalina Seachon-Lanete of Masbate’s third district, who allowed her pork to be used 13 times; followed by Conrado Estrella III of Pangasinan’s 6th district and Rodolfo Plaza of Agusan del Sur, both nine occasions; and Samuel Dangwa, of Benguet, eight.

Contacted by the Inquirer last week, Estrada said he would comment after he had read the affidavits secured by the NBI and had enough background information on the subject. Enrile and Revilla were not immediately available at the weekend but were expected to likewise respond to the issues raised against them.

Faced with a similar issue on their pork barrel funds going to spurious projects of bogus NGOs a few months back, Estrada called for an investigation into who could have unduly benefited from the scam. 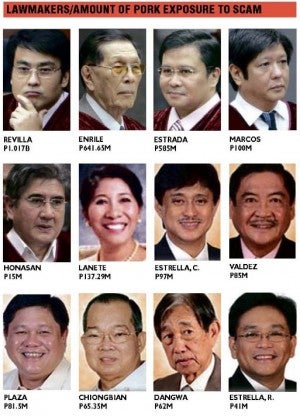 All three senators earlier acknowledged that they had identified agriculture projects that were funded by their pork but denied any knowledge that an NGO that handled the funds was a bogus organization.

The three had asked the Department of Agriculture to shed light on how the concerned PDAF funds released between 2009 and 2010 were actually spent.

Reached by phone last week, former Rep. Arthur Pingoy asked where the PDAF was supposedly sourced from. He asked for details about the JLN company and said he would have it checked. He said he would then get back to the Inquirer.

‘Nothing to do with that’

Rep. Victor Ortega said: “I have nothing to do with that. I did not receive a single sack of fertilizer nor received a single peso from the fund for the fertilizer. The accuser should face me and tell me personally.” He said of Napoles: “I have never met her nor talked to her. I do not know her.”

Each senator has a PDAF budget of P200 million annually; congressmen each have a P70-million pork allocation, but during the Arroyo administration, favored senators and congressmen received more than they were supposed to get. Under the law, the lawmakers have the sole discretion in the disposition of their pork barrel.

Based on the documents obtained by the Inquirer, Enrile, at one time, downloaded P111 million of his PDAF to three dummy NGOs on the same date. Of the total amount, only P35 million allegedly went to the Napoles NGOs.

A total of P3 billion was on the whistle-blowers’ list for the years 2006-2011. Implementing agencies for this total amount were the National Livelihood Development Corp. and the Technology Resource Center.

Apart from the 20 dummy organizations, the list also showed that 30 local government units were recipients of the pork barrel. However, according to the whistle-blowers, there were LGUs that were not aware of the funds and did not receive a single centavo.

The whistle-blowers also identified banks where the accounts of the bogus NGOs were deposited.

Deposits were made in the following banks:

Luy, the whistle-blower, said he also opened bank accounts in Napoles’ name and deposited there cash taken from the NGO accounts.

The whistle-blowers said portions of the illegally acquired funds were deposited in the accounts of various persons that earned interest in connivance with the Air Materiel Wings Savings and Loan Association Inc. (SMWSLAI).

“There are existing accounts of other people with AMWSLAI where she put the money and withdraw them through the help of some officials there,” one of the whistle-blowers said. “She can deposit and withdraw money from someone else’s accounts without the knowledge of that person that his account is being used by Napoles.”

The whistle-blower also identified properties supposedly acquired by Napoles in the course of her illegal activities: houses and lots located at high-end subdivisions like Forbes Park in Makati, Ayala Alabang Village, the whole 25th floor of Discovery Center in Pasig City, units in Serendra and Pacific Plaza Towers (18-B and South Garden Unit) and AFPVOI Village (lots only).