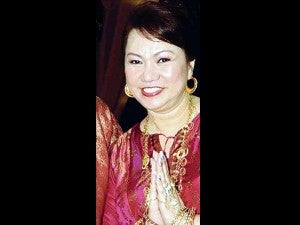 The National Bureau of Investigation is looking into allegations that the government has been defrauded of some P10 billion over the past 10 years by a syndicate using funds from the pork barrel of lawmakers and various government agencies for scores of ghost projects.

Described by an NBI investigator as the “mother of all scams,” the con game came to light in March following the kidnapping—and subsequent rescue—of an employee of a trading company, JLN Corp., which was purportedly behind the scheme, according to sworn affidavits and interviews conducted by the Inquirer.

JLN stands for Janet Lim Napoles, who has been identified as the alleged brains behind the racket. She runs the company with her brother, Reynald “Jojo” Lim.

The sworn affidavits—prepared by six whistle-blowers with the assistance of their lawyer, Levito Baligod, and submitted to the NBI—stated that JLN Corp., with offices on the 25th floor of Discovery Suites in Ortigas Center in Pasig City, had defrauded the government of billions of pesos in ghost projects involving the creation of at least 20 bogus nongovernment organizations. These NGOs were supposedly the ultimate recipients of the state funds, but the money went to Napoles, according to the affidavits of the six whistle-blowers.

All six were interviewed by the Inquirer, which also secured copies of their sworn statements. The extent of the swindling brought tears to one NBI agent in an interview.

The kidnap victim, Benhur K. Luy, the principal witness to the scam, was rescued by a special task force headed by Rolando Argabioso, assistant NBI regional director, on March 22 from a condominium unit in the South Wings Gardens of Pacific Plaza Tower in Bonifacio Global City.

Kidnapping charges were brought by the NBI against Napoles and Lim, but these were subsequently dropped purportedly for “lack of probable cause.” Lim was arrested and briefly detained. Napoles issued an affidavit denying involvement in the abduction.

Since then, the 31-year-old Luy, Napoles’ cousin and personal assistant in JLN Corp., has executed affidavits detailing his abduction and the reasons why he was kidnapped. In one signed statement, he said he was accused by Napoles of striking out on his own concocting illegal deals, without her knowledge, copying schemes from his cousin’s operations.

Five others who had worked in JLN Corp. have come out to corroborate the account of Luy, detailing the activities of Napoles. One of them was a project coordinator and another was a nanny who was made president of a dummy NGO. The rest were clerks and support staff.

The 49-year-old Napoles was summoned to the investigation conducted in 2008 by the Senate blue ribbon committee on the P728-million fertilizer scandal involving then Agriculture Undersecretary Jocelyn “Joc-joc” Bolante. She then testified she had used dummy companies in that scheme but no charges have so far been brought against her in connection with that case.

The sources of funding for the supposed projects, ostensibly meant largely to benefit poor farmers through provisions of fertilizers and farm equipment and implements, came from the priority development assistance funds (PDAF), or pork barrel, of three senators and 11 members of the House of Representatives.

The whistle-blowers said JLN Corp. was able to carry on the swindle through Napoles’ vast network and connections.

“JLN offered to lawmakers commissions equivalent to 40 to 60 percent of the amount of PDAF in exchange for the right to determine the implementing agency and fund beneficiary,” according to Luy.

“Apart from senators and congressmen, Madame Janet has also connections in almost all branches of government, friends in the right places, and lawyers who do her bidding,” he told the Inquirer in an interview.

Luy, who has a ready smile and sports a white side wall haircut, said he began working for his cousins in September 2002. Over the past decade, he said he had gained intimate knowledge of their operations, how they manufactured receipts, forged signatures of local government officials, fabricated names of beneficiaries of the state funds.

He said he had planned to put up his own business and establish his own network similar to his cousins’. But before he could go on his own, Napoles learned of his plan and locked him up first in the JLN office on Dec. 19, 2012, before he was later taken to the condominium.

The NBI team rescued Luy on the evening of March 22 on orders of Justice Secretary Leila de Lima and NBI Director Nonnatus Rojas following a complaint for abduction lodged by Baligod in the Department of Justice.

In his letter to De Lima, Baligod stated that Luy was detained by the siblings “to ensure that nobody can directly implicate them with the issues on the fertilizer scam, Malampaya scam and anomalies in the implementation of several PDAF-funded projects.”

In his sworn affidavit to the NBI, Luy said he opened accounts in various banks, including the Air Materiel Wing Savings and Loans Association, and deposited and withdrew money for Napoles.

“The accounts and transactions were in the tens of millions of pesos and all of these were remitted to Madame Janet,” Luy told the Inquirer.

“These bags were piled in the master bedroom and in the bathtub of her bathroom,” he said.

Read Next
MMDA: New scheme just for rush hours
EDITORS' PICK
Pre-order the new vivo Y20s [G] to get a free TWS earphone
Philippines, US to begin 2-week joint ‘Balikatan’ exercises on Monday
Metro Manila to have shortened curfew hours from 8 p.m. to 5 a.m. under MECQ
Pru Life UK receives four golden arrows for solid corporate governance
‘NCR Plus’ to be under MECQ starting April 12 until April 30 — Palace
Speed up your game with the new vivo Y20s [G]
MOST READ
Stop ‘creeping occupation’ of ‘militia’ boats in WPS, Pacquiao asks China
Bea Alonzo clarifies status of her relationship with Dominic Roque
Convicted former aide of Sen. Bong Revilla dies — BuCor
Locsin to China: ‘Then move out’
Don't miss out on the latest news and information.