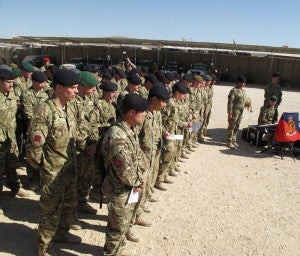 LONDON — A total of 50 serving and veteran British soldiers committed suicide last year, more than were killed fighting the Taliban in Afghanistan, according to figures reported on Sunday.

The Ministry of Defense confirmed that seven serving soldiers killed themselves in 2012 and a further 14 died in suspected suicides, although inquests have not yet been held.

An investigation by the BBC found that at least 29 veterans also took their lives last year. There are no official figures.

A total of 40 British soldiers died in action in Afghanistan in the same period, while serving as part of a decade-long British deployment that reached 9,500 troops at its peak.

Relatives of those who killed themselves told the BBC the military should do more to tackle post-traumatic stress disorder (PTSD) and treat it like a physical injury.

One soldier who committed suicide, Dan Collins, had twice survived being shot in Helmand, was blown off his feet by a roadside bomb and then witnessed a close friend killed in front of him.

He was diagnosed with PTSD and given treatment, but after 10 months the army said he had recovered. He was later released back home and on New Year’s Eve 2011, he hanged himself.

“You’ve got units for soldiers that are severely injured and they’re treated. You should have a unit for treating soldiers with PTSD,” said his mother Deana Collins.

A spokesman for the Ministry of Defense said: “Every suicide is a tragedy and our thoughts remain with the families of all those who have sadly taken their own lives.

“Mental health of our personnel and veterans is a top priority for the government, that is why we have committed £7.4 million ($11 million, 8.5 million euros) to ensure there is extensive mental health support in place for everyone who needs it.”