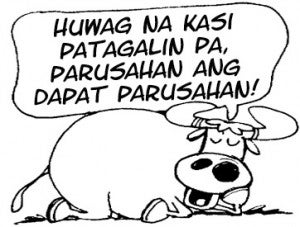 This is good news if someone gets punished. But why only now?

That is the P10-billion question that netizens wanted answered in light of the Inquirer special report on the National Bureau of Investigation probe of allegations that a syndicate used state fund for ghost projects with the connivance of some lawmakers.

Netizen Leonardof wondered how the Commission on Audit had failed to notice the “humongous scam” while it was in its infancy.

The NBI investigation started only recently but the “scam” had apparently been going on for 10 years, according to the Inquirer report.

“The stink of this mother of scams permeates Congress, for the scam involved pork barrel funds. It is hard not to imagine that some people in the government were involved in this scam, perhaps their eyes were blinded by the thick wads of money coming from the scammers,” Leonardof said on Inquirer.net.

Facebook (FB) user Ricky Nazareno hailed the NBI for the report. “This is good news. I hope this turns into something good. I still believe in the integrity of this agency. Go NBI, and expose these thieves!” he posted on the Inquirer.net Facebook account.

But FB user Patrick Parmisana Gonzales was skeptical. “Good thing if someone gets punished for this. I know funds are being diverted. The pork barrel should be removed because senators are just fooling us,” he said in a post on Facebook.

“Son of a *****! What’s new about this? I hope heads would roll!” Edwin Alba Empestan also posted on FB.

Juan.De.La.Cruz mused that he wanted to renounce his citizenship because of what happened: “I don’t want to pay my taxes anymore. I will invoke the military to assassinate every personality involved.”

A certain Niccolo Machiavelli wished Davao Mayor Rodrigo Duterte were the President. “How many more scam is out there that is not discovered? This is one reason why pork barrel should be abolished! How I wish Duterte [were] our President,” he said.

Taking a swipe at Janet Lim-Napoles, the alleged “mother of the P10-B scam,” catotheyounger posted this: “This disproves the absurd claim that women are less likely to be involved in corruption.”