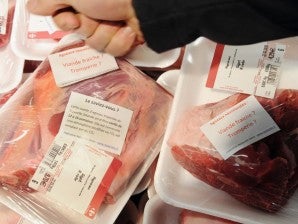 WELLINGTON, New Zealand — Hundreds of tons of frozen mutton, lamb and beef from New Zealand have been stranded on Chinese docks after China halted imports from the country due to a certification dispute.

China has blocked all New Zealand beef and sheep meat that has arrived there in the past two or three weeks, said Dan Coup, trade and economic manager for the Meat Industry Association of New Zealand.

The meat sitting in freezers at the docks is worth tens of millions of dollars. Because it is frozen, it will last months, Coup said.

Exporters changed the branding on their certificates in March after New Zealand government departments merged. Because the meat is transported in ships, he said, it would have taken several weeks before products with the new branding arrived.

There is no health or safety issue and officials are working to resolve the issue, Coup said.

But if the dispute drags on, he said, there’s a risk that Chinese buyers will look elsewhere for meat and that exporters will get hit with big storage fees.

In the first quarter of 2013, New Zealand exported sheep meat worth 204 million New Zealand dollars ($165 million), beef worth NZ$73 million, and edible offal worth NZ$5 million to China. Over the past year, China consumed NZ$600 million of meat. If the pace of the latest quarter continued, the market this year would almost double to NZ$1.1 billion.

“We value our close working relationship with China and remain confident that this issue can be resolved,” said Nathan Guy, the Minister for Primary Industries, in a release