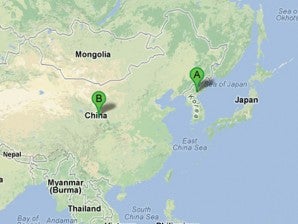 BEIJING — China says it is urging North Korea to release a Chinese fishing boat whose owner publicized the plight of its 16 crew in an online account saying they were seized by gun-wielding North Koreans earlier this month and held for ransom.

Yu Xuejun, who wasn’t aboard the boat, wrote on his microblog late Saturday that North Koreans seized his boat on May 5 in what he says were Chinese waters and that they demanded a 600,000 yuan ($100,000) ransom. Yu, posting on a verified Tencent Weibo account, said he was asking for help from Internet users and China’s Foreign Ministry.

The official Xinhua News Agency, in its first report of the incident late Sunday, said diplomats in the North Korean capital had received a request for help from Yu as early as May 10, and that they had demanded at the time that North Korea release the boat.

The official Xinhua News Agency, citing Chinese Embassy official Jiang Yaxian, said the embassy had contacted the North Korean Foreign Ministry’s Bureau of Consular Affairs, “asking (North Korea) to release the boat and the fishermen as soon as possible.” Jiang said the embassy would “continue efforts to ensure that the issue will be properly addressed at an early date.”

The respected Southern Metropolis Daily reported earlier Sunday that Yu received a call from North Korea saying his boat had entered North Korean waters — although he maintains it was in Chinese waters. It quoted an unnamed official from Liaoning province’s maritime police as confirming the case had been reported to them on May 6 and that a team was handling it.

Yu said the North Korean side had asked for the ransom to be paid by noon Sunday to a company in Dandong, a city in northeastern China on the North Korean border, or they would confiscate the boat and repatriate the crew. The newspaper didn’t mention whether Yu had paid any money.

In May last year, a North Korean boat hijacked three Chinese boats with 29 fishermen on board. State media said then that the unidentified captors demanded $190,000 for the fishermen’s release. They were freed within two weeks.