Pope Live: Choosing a name, and awaiting a new pontiff 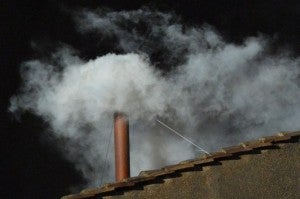 White smoke rises from the chimney on the roof of the Sistine Chapel meaning that cardinals elected a new pope on the second day of their secret conclave on March 13, 2013 at the Vatican. AFP PHOTO / VINCENZO PINTO

“Pope Live” follows the choice of the new pope as seen by journalists from The Associated Press around the world. It will be updated throughout the day with breaking news and other items of interest.

Every time a new pontiff is chosen in a conclave, a senior cardinal goes up to him and asks: “And by what name do want to be called?”

The question is popped immediately, while all electors are still locked in the Sistine chapel. So the winner had better have done his homework and already picked a name.

Shortly after, the senior cardinal reads out the pontifical name in Latin from the main balcony of St. Peter’s Basilica as part of the “Habemus Papam” — “We have a pope” — formula that proclaims the election of a new pope.—Daniela Petroff

The new pope can’t move into the papal apartment just yet.

He will remain with the cardinals at the Vatican’s Santa Marta hotel, an impersonal modern hotel on the edge of the Vatican gardens where they have been sequestered since the beginning of the conclave.

He will spend his first night as pontiff in a room that features a bed with a dark wood headboard and a carved image of Christ’s face, as well as a sitting area and a study.

The new pope is expected to stay there for a few weeks until the papal apartment in the Apostolic Palace can be renovated. The apartment was sealed Feb. 28, just after Benedict resigned, and cannot be reopened until the new pope formally takes possession.—Nicole Winfield

The pope’s Twitter account, whose profile was changed to read “Sede Vacante” when Benedict stepped down, now has been switched back to “Pontifex.”

The pope’s new clothes were ready before he was.

The family-owned Gammarelli tailor shop, which has dressed popes for two centuries, had three sets of vestments — in small, medium and large — prepared for the naming of the new pontiff.

The papal outfits were on display in the window of the small wood-paneled store nestled in the shadow of the Pantheon, where the family moved in 1850 from the original founded just around the corner in 1798. They were delivered to the Vatican and left in a room next to the Sistine Chapel, ready for the new pope to change into his new clothes.

The pre-made looks haven’t always fit. In 1958, the rotund John XXIII appeared on the balcony with safety pins holding together the back of his cassock.—Daniela Petroff

It was a fairly quick decision.

In centuries past, conclaves dragged on for weeks and months, sometimes years. During a 13th-century conclave that stretched for weeks, a leading candidate died.

These days the discussions are much quicker. The pope was chosen in five rounds over two days.

The previous conclave that chose Benedict XVI went four rounds over two days before the Latin announcement rang out across St. Peter’s Square from the basilica’s balcony: “Habemus papam” — We have a pope!

The longest conclave of the last century went on for 14 rounds over five days, and yielded Pius XI — in 1922.—Frances D’Emilio

WHO VOTED FOR ME?

One thing is sure—the new pope will never truly know who voted for him.

Cardinals used to sign their names to ballots, but stopped doing so “due to an old history of intrigues and tensions, when people used to fear the most serious reprisals for their choices,” says Michael Bruter, who teaches political science at the London School of Economics.

Even so, factions of cardinals will have made their views known during informal talks between votes.

Romain Lachat, a political scientist at Pompeu Fabra University in Barcelona, says the formation of coalitions — where voting cardinals slowly rally around a man who may only be their second or third choice — is inevitable.

There is no formal process of elimination and cardinals can even vote for themselves — which may explain why conclaves often need more than one round of balloting to produce a pope.—Frank Jordans

The ballots are tied together with needle and thread and are then placed in an iron stove. If the smoke coming out of the chimney is white — not black — it means there’s a pope.

The signal hasn’t always been so clear. In 1958, damp straw didn’t catch fire, and the smoke was white instead of black. After John Paul’s death in 2005, the Vatican used special chemicals in an effort to make the color clear — with only limited success.

If in doubt, the bells of St. Peter’s Basilica also ring when a new pope has been chosen.—Frances D’Emilio