Typhoon ‘Pablo’ maintains strength; Signal No. 3 up in N. Palawan 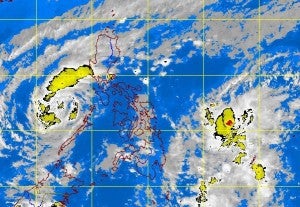 As of 10 p.m. Wednesday, the eye of Typhoon Pablo was located based on radar, satellite and surface data at 180 kilometers northwest of Roxas, northern Palawan, the Philippine Atmospheric Geophysical and Astronomical Services Administration (Pagasa) said.

Pablo was packing maximum sustained winds of 120 kilometers per hour near the center and gustiness of up to 150 kph, Pagasa said.

It was forecast to move west northwest at 7 kph, Pagasa added.

According to Pagasa, Pablo was expected to be at 330 km west of Coron, Palawan by Thursday evening and outside the Philippine Area of Responsibility (PAR) by Friday evening.

Public Storm Warning Signal No. 3 remained hoisted over northern Palawan incl. Calamian Grp. of Islands while the rest of Palawan was placed under Signal No. 2.

Signal No. 1 was raised in Occidental Mindoro.

Due to the prevailing typhoon, Pagasa warned residents living in low lying and mountainous areas under public storm warning signals against possible flashfloods and landslides.

Likewise, those living in coastal areas under Signal No. 2 and Signal No. 3 are alerted against big waves or storm surges generated by the typhoon.

The weather bureau advised fishing boats and other sea vessels not to venture out into the seaboards of Luzon and western Visayas.

At least 274 casualties have been recorded so far with hundreds more injured or missing, according to the National Disaster Risk Reduction and Management Council.

More than 200,000 people were affected by Pablo, which is said to be the strongest typhoon to hit the country in 2012. With Matikas Santos