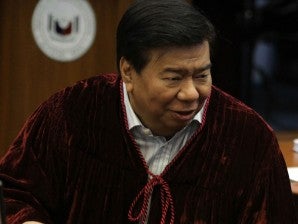 MANILA, Philippines – The P2.006 trillion budget for 2013, which is 10.5 percent higher than the 2012 budget, was officially sponsored Wednesday by Senator Franklin Drilon.

He cited “the rosy economy in the first quarter [of 2012] because of renewed business and consumer confidence, improved external trade, and accelerated government spending [resulting] in a 6.4 percent growth rate,” as justification for the increased budget for next year.

Drilon, chairman of the Senate Committee on Finance, said that the improved economy of the country was reason for several investment ratings upgrades given by international economic rating organizations.

“The biggest share of 34.8 percent will go to social services, while 25.5 percent will be for economic services,” Drilon said in a statement.

“On the other hand, debt-servicing burden will fall to 16.6 percent next year from 18.3 percent in 2012. General public services will have a 17.3 percent share while defense will get 4.5 percent,” he added.

The Department of Education (DepEd) will still get the largest budget among the government agencies and will also get an increase in their budget by 22.6 percent to P292.7 billion from the current P238.8 billion.

“A P54 billion increase in funding will help address shortages in education resources such as classrooms, teachers and textbooks. It will also support the department’s K+12 program,” Drilon said.