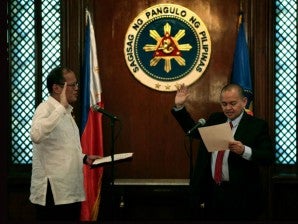 President Benigno Aquino III administers the oath of office of the newly appointed Associate Justice of the Supreme Court Marvic Leonen at the President’s Hall at Malacañang on Wednesday. PHOTO/ MALACAÑANG PHOTO BUREAU

With his appointment, Leonen has become the youngest member of the high tribunal this century. Leonen will be turning 50 on December 29.

Before Leonen, the youngest to be appointed Associate Justice of the Supreme Court was Chief Justice Maria Lourdes Sereno. She was 50 when she joined the high court in 2010. Sereno was born in 1960.

Leonen will fill the position vacated by Sereno after she was appointed Chief Justice last August.

He was credited for crafting the framework peace agreement between the Aquino government and the Moro Islamic Liberation Front. He has been the head of the peace panel since 2010.