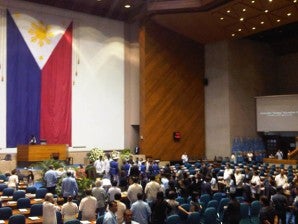 MANILA, Philippines—Tired of politicians switching from one party to another?

A bill seeking to punish “political turncoatism” has been passed on third and final reading at the House of Representatives. A related measure was earlier approved at the committee level in the Senate where some members expressed reservations, however.

But to help put an end to political turncoatism, House Bill No. 6551—An Act Strengthening the Political Party System—would require taxpayers to finance the operations of these political parties under the proposed “state subsidy fund.”

Under HB 6551, accredited political parties could tap into the fund to cover items such as “travelling expenses of the candidates and support personnel in the course of the campaign.”

“Production and distribution of electoral paraphernalia and other propaganda materials” are also included on the list of “allowable expenditures.”

The bill defines political turncoatism as a “change of political party affiliation by an elected official during one’s term, except within six months prior to the end of the term.” But it would not cover an elected official who was “expelled in writing” from the party, so long as the case did not involve “political opportunism.”

Political opportunism refers to “any act of a party member constituting disloyalty to the party or regular non-adherence to the party’s ideological principles, platform and programs, as determined by the party in accordance with its constitution and bylaws.”

“Why are we preventing something that’s not a crime? You will penalize somebody for going from Liberal to Nacionalista? Why? I don’t understand that,” he told reporters last June. “Everybody will turn independent after that.”

In HB 6551, turncoats shall be “deemed to have forfeited their elective office, if they change their political party affiliation, except within six months prior to elections.” They would also be “disqualified from running for any elective position in the next succeeding election immediately following the act of changing political party affiliation.”

The measure also bars them from “being appointed or from holding any position in any public or government office for three years after the expiration of the current term/office.” They would also have to “refund any and all amounts received from one’s former political party, plus 25-percent surcharge.”

To help ensure proper spending, parties will have to “institute internal control mechanisms to promote accountability and transparency” and “develop and enforce an internal code of conduct and ethical standards, and disciplinary procedures for party members.”