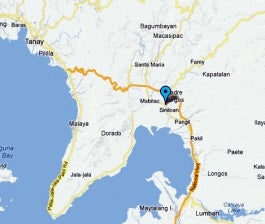 SAN PABLO CITY, Philippines—The Siniloan River overflowed early Saturday after a night of relentless rain, flooding the town of Siniloan and outlying villages barely a week after  evacuees at the Siniloan Central School building returned to their homes, the Department of Social Welfare and Development said.

Vinia Tadiosa of the DSWD office in Siniloan  told the Inquirer in a telephone interview that the swollen Siniloan River burst its banks at around 3 a.m., swamping the town center and low-lying areas in floodwaters up to the waist deep.

Eighteen families still in a temporary shelter had to be evacuated to higher ground at the Barangay Hall because of the flooding, she said.

Tadiosa said the floods were deepest at Sitio Bulihan in Barangay Halayhayin with the waters rising up waist level. Barangay Wawa submerged in knee-deep floods while the town center, particularly Regidor and Bonifacio Streets and roads near the public market were under water from a few inches to a few feet deep.

The floods, however, were gradually subsiding as rains weakened during the day, she said.

Local resident Mary Ann DR Leopando told the Inquirer in a telephone interview that the  downpour began at around 4 p.m. Friday and continued without letup until 5 a.m. Saturday.

Leopando, who works at the finance office of the Siniloan National High School, said she was praying runoff from the mountains would not cause more flooding as school authorities and residents had just completed cleaning up and repainting classrooms for the resumption of classes on November 5.

The Siniloan National High School and schools in nearby villages were among the worst-hit by floods caused by heavy monsoon rains that swamped many towns in Laguna starting last August.