Legion of Honor for ‘true leader’ 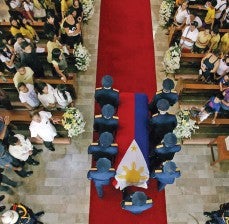 LAST NIGHT A police and military honor guard takes the flag-draped casket of Interior Secretary Jesse Robredo into the Minor Basilica of Our Lady of Peñafrancia in Naga City on Monday, the eve of his funeral. LYN RILLON

NAGA CITY—Before Interior Secretary Jesse Robredo is laid to rest here Tuesday, President Benigno Aquino will confer on him posthumously the Philippine Legion of Honor, with the rank of Chief Commander.

“The Philippine Legion of Honor is considered the highest award the President can bestow without the need for approval of Congress,” Malacañang said Monday.

Mr. Aquino will lead the state funeral, which includes full military honors, and deliver a eulogy for Robredo after this morning’s funeral Mass at Minor Basilica of Our Lady of Peñafrancia.

During the observance of National Heroes’ Day Monday, Mr. Aquino honored Robredo, calling him a “true and a good leader” who “heroically” chose service over transactional politics.

“Tomorrow we’re bringing a true and a good leader, Secretary Jesse Robredo, to his final resting place,” the President said in a speech at Libingan ng mga Bayani.

“He heroically chose a simple lifestyle and focused on the welfare of others before himself, and put his principles above transactionalism,” Mr. Aquino said.

It was the President’s first official statement about Robredo since the popular home affairs chief died in a plane crash at sea in Masbate province on August 18.

Mr. Aquino personally oversaw the search for Robredo’s body in Masbate, and then accompanied it from there to his hometown here after it was recovered from the wreck of the crashed plane on August 21.

He welcomed Robredo’s remains to Malacañang on Friday for a two-day state vigil, and sent these off to this city on Sunday morning with full military honors.

The President will fly to this city this morning to lead the state funeral for Robredo, expected to be attended by thousands of residents whom the latter had served for 19 years as mayor before joining the Aquino administration in 2010.

After the 10 a.m.  Mass at the basilica, the President will confer posthumously on Robredo the Legion of Honor “for life achievement as secretary of the interior and as mayor of Naga City,” the Palace said through Bulletin No. 11 prepared by the Committee on Funeral Arrangements and Burial.

The committee on Monday issued the schedule for the final day of national mourning for Robredo that President Aquino ordered last week through Proclamation No. 460.

The schedule includes final public viewing, the Legion of Honor ceremony  and the state funeral.

8 a.m. today, to be followed by the concelebrated requiem Mass at 10 a.m.

Next will be the Legion of Honor ceremony led by the President himself.

During the ceremony, Budget Secretary Florencio Abad will read the citation. Then the President will present the insignia to Robredo’s widow, lawyer Maria Leonor “Leni” Robredo.

Mrs. Robredo will deliver a response and, according to Communications Secretary Ricky Carandang, that will be the signal for the President to deliver his eulogy.

After the President’s eulogy, pallbearers will carry Robredo’s flag-draped casket and load it on a caisson, then a police and military detail will render departure honors, including a 19-gun salute.

From the basilica, the cortege will carry the casket to Funeraria Imperial, where a military detail will render the final honors for Robredo, a three-volley gun salute accompanied by a sounding of taps.

Afterward, the flag will be taken off the casket, folded, and President Aquino will present it to Mrs. Robredo.

That ends the state funeral. Robredo’s remains will then be carried into the funeral house for cremation.

“The entire state funeral with its honors, tradition and protocol, is a manifestation of the acknowledgment by the President and his official family of the virtues exhibited by Jesse in governance—honesty, simplicity, integrity, among others,” presidential spokesperson Edwin Lacierda said by text message. “And for his service to the people, a grateful nation is forever indebted to him.”

Lacierda said all Cabinet officials would attend the state funeral.

Perhaps the only one who will not be here for the funeral is Foreign Secretary Albert del Rosario, who is in Beijing attending to Ambassador to China Sonia Brady, who is in a hospital there after suffering a stroke on Friday.

In their remarks at Libingan ng mga Bayani, where more than 47,000 of the country’s heroes are buried, Maria Serena  Diokno of the National Historical Commission of the Philippines and Taguig City Mayor Laarni Lopez-Cayetano also paid homage to Robredo.

“Establishing a kingdom on the right path is not only a dream,” Diokno said. “More important, it’s our duty as people who love our country. This is a sign of our heroes then. It is the one and only sign of a Filipino hero through all time. We’re fortunate that at present we have a paragon in the person of Secretary Jesse Robredo.”

Cayetano said Robredo set the standard for all other public officials.

“While the country mourns the passing of Secretary Robredo, it brings new standards for me and all the officials,” Cayetano said. “His public service is an act of heroism.”

Elsewhere, the hero’s honors for Robredo begins Tuesday at public elementary and high schools with the teaching of his brand of public service.

Education Secretary Armin Luistro on Monday said he hoped the special lesson would help the youth understand why the entire country was mourning the passing of Robredo.

“There is much to learn about his life, his principles, his commitment to public service and his dedication to the common good,” Luistro said.

“If our students recognize honest and dedicated public servants as the norm rather than the exception, this will help accelerate the process of social transformation,” Luistro said. “Then Secretary Jesse would not have died in vain.”

The special lesson will be taken up as part of social studies or of values education. The lesson for values education includes an essay written by Robredo’s daughter, Jessie Marie, about him. She wrote the essay in 2003, when she was 15, three years after her father received the Ramon Magsaysay award for public administration.

After Tuesday’s funeral, a question needs to be answered: Who will take Robredo’s place at the Department of the Interior and Local Government (DILG)?

Carandang said the President, although postponing the decision, was thinking about it.

After the funeral, he said, the administration will start “serious discussion” about finding a new secretary of the interior. With reports from Dona Pazzibugan in Manila and Juan Escandor Jr., Inquirer Southern Luzon