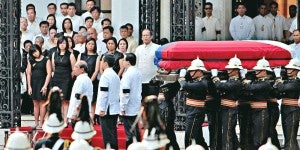 The award, which is the highest a sitting president can bestow without congressional approval, will be given after to Robredo after the funeral mass on Tuesday.

Aquino cited Robredo’s life achievement as head of the Department of Interior and Local Government and mayor of Naga City.

Robredo, 54, and two others died in a plane crash in Masbate last August 18.

He will be laid to rest hin his hometown Tuesday.