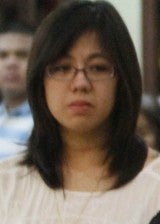 NAGA CITY—Delivering a light and anecdote-filled response to tributes to her father on Sunday night, the second daughter of the late Interior Secretary Jesse Robredo vowed to pursue his legacy, with statements that hinted at a career in politics in this city.

Patricia “Tricia” Robredo, 18, a premed student at Ateneo de Manila University, described her father as a family man first and then a responsible public official who rallied people to fight for good government by looking inside for the heroes within them.

“Sec, Mayor, Pogi, Bok, bright boy, Papa … it will not stop on Facebook, Twitter or TV our pledge to continue what you have started,” Tricia said at necrological rites for her father at City Hall here.

“I will be the one to take care of Mama,” she promised, drawing applause from the hundreds of mourners, including local officials, inside the main hall of the administrative building where her father was lying in state and hundreds more outside watching her on large screen monitors.

Tricia assured the mourners that they, the three daughters of Robredo, would return to Naga City to continue the legacy of their father once they have become successful professionals.

The Nagueños responded with an even louder and longer applause.

At the end of her 25-minute speech in Bicol, Tricia asked the mourners to stand up and salute her father, on whom had been heaped since he died profuse accolade and recognition for his work in public service and local government.

Robredo died in a plane crash in Masbate province on August 18. He will be buried Tuesday, with President Benigno Aquino leading the ceremonies to give him state honors.

On the lighter side, Tricia said that after confirmation of their father’s death, her youngest sister Jillian, 13, asked their mother Leni how old Kris Aquino was when her father, Sen. Ninoy Aquino, died.

Tricia said Jillian also wanted to become a movie star like Kris Aquino, unlike her older sister Jessica Marie, whom she described as strong and smart, and herself, who was “shy, full of drama” but preferred to be alone.

Tricia said her father loved all his daughters, tutored them, and provided them with even the littlest of things, including tips on how to secure tickets to a basketball game.

Her father, Tricia said, was a loving husband who always had surprises for their mother. She recalled one instance when her father told her mother by phone that he was coming home to Naga from Manila the next day, when all the time he was already on a bus, together with his two daughters, traveling to Naga.

Tricia recounted an incident that she described as unforgettable and it happened when her father was the mayor of Naga City. One day, she said, a couple came to their house, asking to be wed.

Her father was sick but did not say no. He wed the couple even though he was in his pajamas, barefoot and wired to an intravenous bottle.

Tricia said her father never said anything unpleasant about anyone, even when he was angry. When he was really angry, he bit his fingers to avoid letting out unkind words.

“He was angry with others but he vented it on himself,” she said.

Her father brushed aside dangers that came with his job in the government, she said. He kidded about them, she said, even his once narrowly escaping a bomb attack in Maguindanao.

Tricia thanked the mourners for the prayers and moral support they had given to her family. She also thanked the fishermen and divers who helped to bring back her father’s body from the sea.

She said her family did not expect such outpouring of support, but was happy to know that many people loved her father.

Tricia said she hoped everyone would continue the legacy of her father, and to see a Robredo in everyone who cared for him.