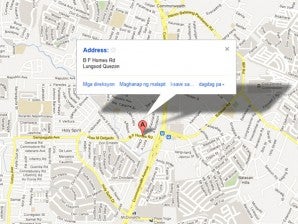 MANILA, Philippines – Authorities believed that they shot dead on Monday morning one of the suspects responsible for robbing the house of ABS-CBN reporter Jay Ruiz last week.

Superintendent Ronnie Montejo, commander of Station 6 of the Quezon City Police District (QCPD), said their operatives immediately responded after they were alerted by BF Homes security guards of several suspicious individuals on board a red Toyota Innova (TKI-245) who were roaming the streets of the subdivision at 5:30 a.m.

Senior Inspector Robert Razon, one of the officers who chased the suspects, told Radyo Inquirer that they caught the suspects stealing a bicycle from one of the houses in the subdivision.

The suspects, armed with pistols, were killed near a vacant lot at the corner of Ventura and Sandico Streets.

Montejo said they were looking for other suspects, who managed to escape during the encounter. He said they were also checking if the suspects were part of a criminal syndicate.

Despite this, Ruiz told Radyo Inquirer 990AM that he and several other victims of robberies in their village were forming a neighborhood watch group to prevent other heists from being carried out.

Ruiz revealed that thieves recently broke into St. Peter’s Basilica along Commonwealth Avenue in Quezon City to steal its cross and chalice.

While he covered the police beat for three years, Ruiz admitted that he  could not sleep well since his home was robbed and was thinking of filing a complaint against their village’s security agency for negligence.

Listen to Radyo Inquirer 990AM for more reports.