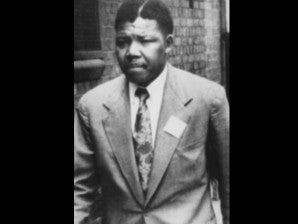 JOHANNESBURG – South Africa’s Nelson Mandela turns 94 on Wednesday, but he was unlikely to attend a host of celebrations as the frail anti-apartheid icon has increasingly vanished from the public eye.

He once partied lavishly with the likes of American talk-show host Oprah Winfrey and other international celebrities, but for the past four years Mandela has blown out the candles alone with his family.

This year the revered statesman, who has been hospitalized twice in as many years, will be at his rural childhood home in Qunu, in the Eastern Cape province, where he has moved “for good” from the city.

These days, his foundation and other organizations use his life example to encourage others to do good.

In 2009, the United Nations declared July 18 International Mandela Day, aimed to get people all over the world to volunteer for good causes.

The Nelson Mandela Centre of Memory, the charitable organisation which he founded after he stepped down from office, calls on people to devote 67 minutes of their time to charity work.
The number 67 represents each year of Mandela’s life in active politics.

Andrew Mlangeni, an anti-apartheid activist who was imprisoned with him on Robben Island, said striving to emulate his values would be the best tribute.

“Living up to the ideals that he sacrificed so much for would be the greatest gift South Africans today could give Mandela,” the 86-year-old told AFP.

“I wish him long life and good health. His presence is a blessing to all us South Africans and the world,” he added.

In January 2011, Madiba, as he is affectionately called, set the nation on edge when he was hospitalised for two nights with a respiratory infection.

Another brief hospitalisation followed in February this year for treatment of a “long-standing abdominal complaint”.

Only the president’s office is allowed to give details of his hospital visits, making the subject of his health a matter a select few know about.

He was last seen looking frail in a rare television appearance on May 30 to receive a symbolic flame marking the centenary of his party, the African National Congress.

“He is healthy, he is well taken care of by family and the medical staff around him.”

Last week, President Jacob Zuma described him as being in “good health” after a home visit to Mandela in Qunu ahead of his birthday.

South Africans across the nation will sing a special rendition of Happy Birthday at 0600 GMT on Wednesday, in an attempt by a Johannesburg-based civil society group to set a world record of the most people singing the rhyme at the same time.

“We aim to get 20 million people to sing Happy Birthday Madiba at 8am on Wednesday,” said Yusuf Abramjee, the spokesman of Lead SA.

“School children will join in, and we encourage everyone, wherever they are to take a moment and sing for Madiba at 8am,” Abramjee told AFP.

In Qunu the Nelson Mandela museum is holding youth artist upliftment projects. In nearby Mvezo, where he was born, family head Chief Mandla Mandela will hand over books to local schools.

South Africa’s first black president, Nelson Mandela gained worldwide respect for his personal sacrifices in fighting the white-minority regime that jailed him for 27 years, and ushering in a peaceful transition to democracy.

On his release in 1990, he led negotiations that paved the way to elections in 1994.

He served one term before stepping down in 1999.

However, critics have argued that simply donating to the less fortunate without attempting to change their circumstances would do nothing to achieve Mandela’s dream of equality. Eighteen years after the end of apartheid, his nation remains one of the most unequal in the world.