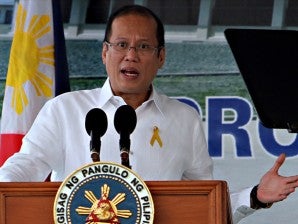 President Benigno Aquino III on Monday slammed the media for inaccurate and negative news reports, saying that these affected the image of the country before the global community.

Speaking at the Philippine Press Institute’s 16th national press forum and annual membership meeting at Trader’s Hotel in Pasay City, the President called on the media to be balanced and fair in reporting events.

Mr. Aquino also complained about the  media’s penchant for  reporting on the travel advisories issued by countries against the Philippines.

Among the recent reports which he found inaccurate included a report that came out in  the  Philippine Daily Inquirer on the recent visit of the Emir of Qatar to Manila.

“The (visit of the Emir) was reported in the article but the headline ‘Qatar’s Emir cuts short state visit’ seemed to plant some doubt. And when you read the article, the message seemed to say ‘that the President and the Emir did not meet, but their bilateral meeting was successful,”’ said the President who did not name the Inquirer, however.

But following his speech, the President  dropped by the Palace press room to explain why he had criticized the Inquirer news report dated April 10.

He noted that it included a sentence that said the Emir’s visit “was supposed to include a meeting with President Aquino and key Cabinet members” when in the next paragraph,  the story  reported on the issues taken up at the bilateral meeting between the President and the Emir.

Speaking to the reporters, Mr. Aquino also pointed to another news item that first came out on the social networking site Twitter, where he was allegedly spotted in Greenhills with a date on a weekday in  March.

Mr. Aquino said he was in the Palace from 10 a.m. to 4 p.m. that day attending a meeting of the National Economic and Development Authority where many issues were tackled.

The President lamented that the media did not even bother to check the accuracy of the report.

“If you don’t believe me, you could have looked and seen, is the convoy present? Are the other Cabinet secretaries’ vehicles still there, etc? How could that happen?” he said. “That’s what we’re asking. It’s not impossible to determine where my location was.”

The President, however, made it clear that he was not angry at the Palace press corps.

But he said the media should check the facts, get the other side of a story and be fair.

To illustrate his point, Mr. Aquino said: “Parang kung idedescribe mo may pimple ako o iyong buong mundo ko yung pimple ko na lang. Imbes na di ba, baka pwedeng sabihin baka maganda ang mata ko, baka maganda yung ilong ko or something. Parang sa atin parati doon tayo sa pimple lang. Kung minsan nakakatawa, kung minsan nakakairita.” [It’s as if you describe me as having a pimple and my world revolved around that pimple. Instead, maybe you can say that I have beautiful eyes, or I have a beautiful nose or something. For us, it’s always only the pimple. Sometimes it’s funny but sometimes it’s irritating.]

Mr. Aquino then cited good stories that needed to be reported like the good agriculture production in the country.

At one point, the Chief Executive  asked the reporters when they last reported a positive story.

The President also took note of crime news reporting where the media tended to report on crimes but would not highlight it when the criminals were convicted and jailed.

He cited as an example the recent conviction by a regional trial court of carjacking gang leader Raymond Dominguez.

“When it came to the time the guy was arrested, the guy was convicted, (the news item) was printed in the corner or lower side (of a page) and was not related to the story that carnapping incidents had gone down,” he said.

He said had these stories been highlighted, maybe the people and law enforcers would be even more encouraged to fight crime because “their efforts were recognized.”

“That’s the whole point of the speech,” Mr.  Aquino concluded.