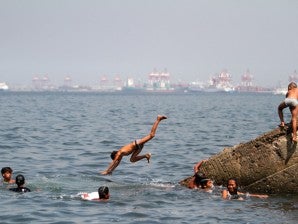 Children dive into the water of Manila Bay in Pasay City to beat off the scorching summer heat. Summer is officially here and it comes a little early than usual this year with the Pagasa recorded 34.5 Celsius temperature in the Metro. When summer peaks in May, temperatures could rise as high as 39 degrees Celsius or even 39.2 degrees Celsius. PHOTO BY RICHARD REYES

Temperatures in Metro Manila are hitting the mid-30s, and if you find that too hot for you, blame it on the fast urbanization of the metropolis.

Urbanization has distorted the heat balance in Metro Manila, leading to an increase in felt temperature by 1 degree to 2 degrees Celsius, according to a study by Nivagine Nievares, a weather specialist at the Philippine Atmospheric, Geophysical and Astronomical Services Administration (Pagasa).

Nievares said the 2010 study was her masteral thesis, and her findings showed that rapid development is a major cause of the stifling heat that the city’s 14 million residents have been complaining about in recent days.

“It has a huge effect. There is a difference of 1 degree to 2 degrees Celsius in temperature between Metro Manila and a neighboring area like Bulacan [province],” Nievares said in an interview with the Philippine Daily Inquirer Monday.

Her study found that the surface of a city, the materials and shapes of its structures affect the distribution of heat. She noted that building materials like asphalt and concrete absorb and trap heat from the sun.

So the heat that Metro Manila residents feel on a hot summer day is not just radiated heat from the sun, but also heat that emanates from buildings, houses, and roads, Nievares said.

Pollutants in the atmosphere also block the rise of heat from the surface to the atmosphere. This is the reason why it is hot in the city even at night, Nievares said.

As summer peaks, the temperature in Metro Manila has been rising, Pagasa said.

On Saturday, the city sizzled at 35.9 degrees Celsius, so far this year’s highest temperature in Metro Manila.

The hottest temperature so far this year was recorded earlier this month at 38.4 degrees Celsius in Clark, Pampanga province, a rapidly urbanizing area.