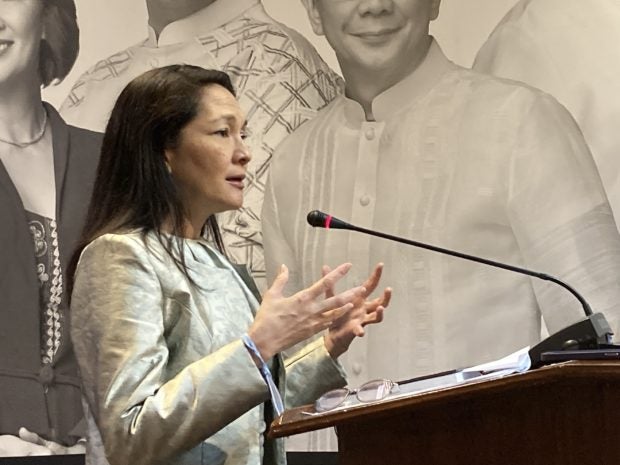 During the Senate Committee on Women, Children, Family Relations and Gender Equality hearing, a photo of alias Brando — a human trafficking victim forced to work as a cryptocurrency scammer in Cambodia — was flashed on the screen.

When asked where the visa was stamped, Brando replied in Malaysia.

(So, please note dear colleagues, this is a stamp of the Bureau of Immigration but it was stamped in Malaysia, not in the Philippines. I did not know that we have a BI Philippines branch in Malaysia.)

BI Commissioner Norman Tansingco then said that the stamp was fake.

Hontiveros quizzed how Brando was able to leave the country.

“Based on his [Brando] narrative, he used the backdoor without passing through the formal port of exit,” Tansingco said.

Brando recalled how he left the Philippines. From Zamboanga, he rode a ferry to Jolo, and a boat from Jolo to Tawi-Tawi.

From Tawi-Tawi, they traveled to Sabah, Malaysia. Then, they trekked a mountain for six hours.

A van fetched them to go to Kota Kinabalu, then to a fish port in Malaysia. They rode a speedboat from Malaysia to Brunei.

They took a flight in Brunei to Thailand and another trip finally to Cambodia.

Aside from Brando, other human trafficking victims, aliases Ron and Miles, were present in the Senate.

Hontiveros asked how much was given to the IO.

Miles likewise shared that two Filipinos are being trafficked outside the Philippines to Singapore while three to five people in Cambodia every week.

Meanwhile, Hontiveros revealed that the IO that assisted the three survivors is a certain Alma Grace David.

Tansingco provided an update, saying that David was relieved and reassigned to the “administrative division in the main office pending investigation being conducted by the Department of Justice.”

“We cannot suspend Ms. David this time because the disciplining authority is the Department of Justice being the appointing authority,” the commissioner said.

Hontiveros’ committee is investigating the reported human trafficking of Filipinos to Myanmar and Cambodia, where they were forced by Chinese syndicates to work as cryptocurrency scammers.