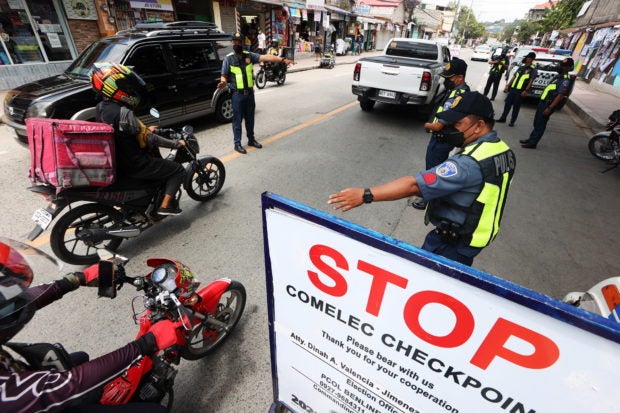 FILE PHOTO: Police officers at a Comelec checkpoint, which are set up to implement the poll body’s gun ban and enforce stricter security during the election period, on April 4, 2022. INQUIRER / NINO JESUS ORBETA

LUCENA CITY — The Philippine National Police (PNP) will implement a gun ban in Cavite province’s 7th district for the entire duration of the special election from January 26 to March 12.

The Cavite police office reminded the public about the gun ban as ordered by the Commission on Elections (Comelec) on its Facebook page on Tuesday, January 24. The Comelec suspended all firearms licenses and permits to carry firearms outside of residence during the gun ban period.

The Comelec set the special election on February 25 for the congressional seat vacated by Justice Secretary Jesus Crispin Remulla. The official campaign period will run from January 26 to February 23.

As a general rule, only bonafide police, military, and members of government law enforcement agencies in complete uniform and while on official duty are allowed to carry firearms for the entire duration of the election period.

Exemption from the firearms prohibition may be secured from the Comelec committee on Ban on Firearms and Security Concerns.

The police will put up checkpoints in strategic areas in the district to implement the gun ban.

The district has a voting population of more than 300,000.