Elderly Fil-Am among 10 dead in US shooting | Inquirer News

Elderly Fil-Am among 10 dead in US shooting 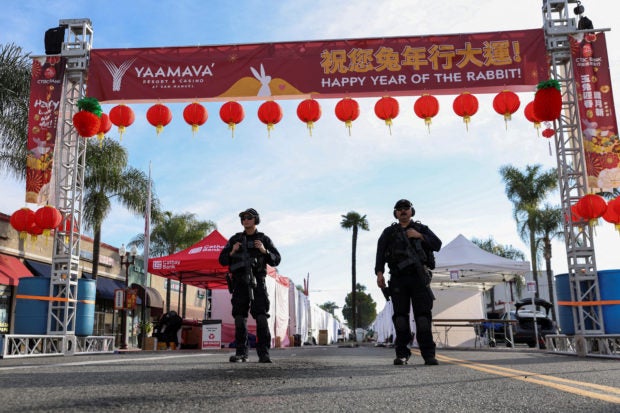 Police officers guard the area near the location of a shooting that took place during a Chinese Lunar New Year celebration, in Monterey Park, California, US on Jan. 22, 2023. (MIKE BLAKE / Reuters)

MANILA, Philippines — A Filipino-American senior citizen was one of the 10 fatalities in the mass shooting in the US state of California on the eve of the Lunar New Year.

Valentino Alvero, a 68-year-old US citizen whose parents were both Filipinos, was among those killed in the mass shooting inside a ballroom in Monterey Park in California, according to the Philippine Consulate in Los Angeles.

“The Consulate General understands his family’s desire for privacy and space during this time of unimaginable difficulty. Nevertheless, we are ready to assist them in whatever possible way should they reach out for any help we could give” the consulate said in a statement on Tuesday.

Valentino was one of the unfortunate victims of 72-year-old suspect, Huu Can Tran, who opened fire in a ballroom killing 10 people and injuring 10 others.The suspect was later found dead from a self-inflicted gunshot inside his van 30 miles away from the scene of the mass shooting.

“Our prayers go out to the families of the victims and we mourn with them during this Lunar New Year Festival, which is supposed to be a time of gathering and celebration,” the consulate said.

Mass shootings have been quite common in the United States, as citizens can easily purchase guns even without identification. Past shootings in schools, parks, and malls by regular citizens were motivated by racist beliefs against certain minorities such as Asians, Muslims, and members of the LGBTQ community.