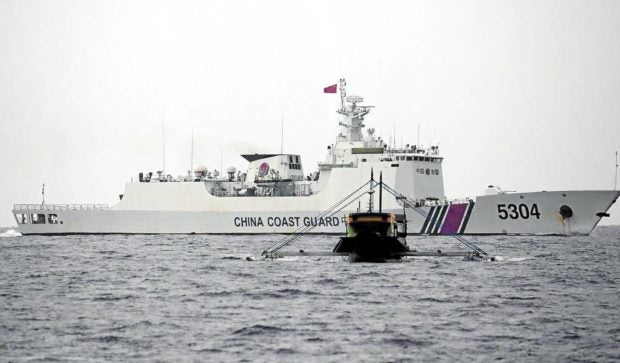 NO EASY PASSAGE A Chinese Coast Guard ship stands in the way of a smaller boat manned by members of the Philippine Navy on a resupply mission to the grounded vessel BRP Sierra Madre, a Filipino outpost at Ayungin Shoal, in this file photo taken on June 21, 2022. —MARIANNE BERMUDEZ

The Philippine Coast Guard (PCG) said it looked forward to a high-level meeting with its Chinese counterpart to discuss the continuing tension in the West Philippine Sea.

“With the outcome of the recent visit of our President to China, we look forward to high level bilateral talks with the China Coast Guard (CCG),” PCG spokesperson Adm. Artemio Abu said in a television interview on Tuesday, referring to President Marcos’ state visit on Jan. 3 to 5.

Manila took the occasion to tackle several areas of cooperation with Beijing, and they agreed, among other things, to revive the dialogue between their respective maritime security units.

The Philippine and China Coast Guard had met three times during the previous administration of Rodrigo Duterte.

Abu said a meeting with CCG must be “well-coordinated with the national leadership through the DFA (Department of Foreign Affairs).”

He expressed confidence that “we will talk about the issues better.”

The PCG on Sunday said it had sent more patrol vessels to the area of Ayungin (Second thomas) Shoal—located 315 kilometers west of Palawan province and within the country’s 370-km exclusive economic zone—after Filipino fishermen reported to the PCG that they were harassed by a China Coast Guard ship, which continued to follow them after they left that area.

The vessel, CCG 5204, had earlier conducted joint search and rescue drills with the PCG in 2020.

Its reported harassment of the fishermen happened just four days after Mr. Marcos returned from China on Jan. 5. About a week later, the President said he and Chinese leader Xi Jinping had agreed that “China will not stop our fishermen from fishing.”

Abu said his agency was “encouraging fishermen to report to the nearest Philippine Coast Guard units on the ground any experience that they may have.”

Meanwhile, DFA spokesperson Tessie Daza on Tuesday reiterated her update over the weekend that the department was still awaiting a report on the Ayungin Shoal incident.

Daza said on Saturday that the department would “take the appropriate diplomatic action” as soon as it receives such a report, while the PCG said that day it was still gathering more information.

But in contrast to the DFA’s still pending action, Mr. Marcos said that matter was already brought up with China.

In an interview with broadcast journalists on Monday, the President said the Philippine government had already used a “mechanism” that he proposed with China for open communication.

“The timing of what we refer to as a shadowing—what they do is they shadow our fishing boats—that incident happened right after I had returned from China. So we have immediately used that thing, that mechanism…. We can even immediately contact the Chinese government and hopefully our counterparts on the other side can bring it to President Xi’s attention, this problem, and we have done that,” Mr. Marcos said.

Regarding his earlier remarks about China allowing Filipino fishermen on their own fishing grounds, Mr. Marcos said his talks with Xi were “very simple.”

“I said we have to raise the level of discourse between the Philippines and China,” the President said. “Now, we already have a bilateral group that’s working on issues about the South China Sea.

My proposal is that we bring that bilateral group to a higher level, … and I will ask my foreign secretary to be part of it. I will ask my ambassador to China to be part of it, and I guarantee you that if there is any decision that needs to be made, either of those gentlemen can pick up the telephone and talk to me, and within five minutes we will have a decision.”

“I hope that China can do the same. And that is what President Xi was agreeable [with]. And he said, ‘Why not?’ So he assigned his foreign minister to take care of the details. That’s what we’re working on now,” Mr. Marcos added.

—WITH REPORTS FROM JEROME ANING AND JACOB LAZARO INQ