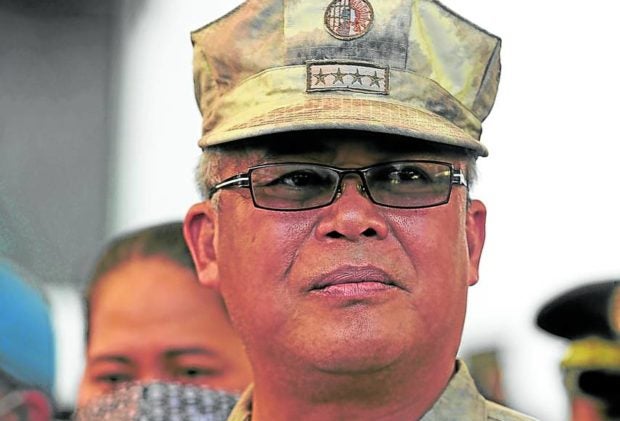 He said Catapang’s appointment papers could be released in a matter of hours or days.

“Well, it can be a matter of hours but tomorrow there’s a Cabinet meeting. I might get it tomorrow,” Remulla said in a ceremony for the release of 340 inmates or persons deprived of liberty.

Remulla said he spoke with Executive Secretary Lucas Bersamin about Catapang’s permanent appointment and the papers were expected to come out “anytime.”

Catapang, a retired chief of staff of the Armed Forces of the Philippines, was named BuCor officer in charge (OIC) last October after a 90-day suspension of his predecessor Gerald Bantag, who is facing murder charges for his alleged involvement in the deaths of broadcaster Percival “Percy Lapid” Mabasa and New Bilibid Prison inmate and alleged conspirator Cristito “Jun Villamor” Palaña.

A new 90-day preventive suspension order was issued against Bantag last week for allowing a television network to interview convicted Gen. Jovito Palparan Jr. in March last year. “Of course, he will have a replacement already. He will be replaced already as a BuCor director. It is within the power of the President,” Remulla told reporters.

Asked why it took months, he replied: “It’s just the way it is. We are not in the business of replacing people just like that.”

Catapang appeared to be surprised with the impending permanent appointment and said he only learned about it from Remulla’s announcement. “I just work and work. I’m not expecting to be acting or OIC,” he said.

But he thanked the President for his trust and said his appointment would now allow him to implement his reform agenda at a full speed ahead.

While he believed he had done so much over the last three months, Catapang said there were more things to be done. “There are still reforms that need to be carried out and it would take around three years for the permanent reforms.”

“So far, we only have stop-gap measures,” he said.

Over the past three months, Catapang has exposed a series of irregularities under the leadership of Bantag such as corruption and the construction of a swimming pool in the prison complex.