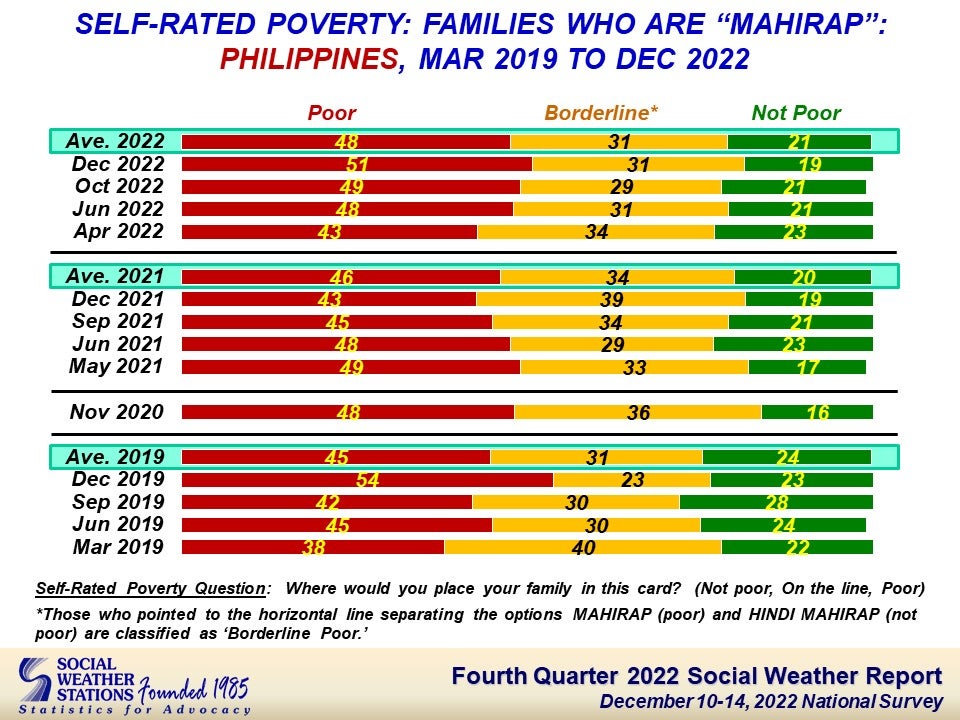 MANILA, Philippines — The percentage of Filipinos who said feeling poor rose to 51% in the fourth quarter of 2022, a recent Social Weather Stations (SWS) survey showed.

Based on the SWS survey released Thursday but conducted from December 10 to 14, 2022, the said percentage translates to an estimated 12.9 million Filipinos, which is higher than in October 2022’s 12.6 million or 49 percent.

According to SWS, the rise in the self-rated poor was due to an increase in Balance Luzon (or Luzon outside Metro Manila), combined with decreases in Metro Manila, the Visayas, and Mindanao.

On the other hand, those who said they were on the “borderline” rose in the Visayas from 21 to 34 percent, in Metro Manila from 23 percent to 29 percent, and in Mindanao from 28 percent to 30 percent, while it dropped in Balance Luzon from 35 to 30 percent.

Those who said they were not poor rose in Metro Manila from 33 to 39 percent, in Mindanao from 8 to 11 percent, but fell in Balance Luzon from 29 to 20 percent and in Visayas from 11 to 9 percent.

“The estimated numbers of Self-Rated Food Poor families are 8.7 million in both December 2022 and October 2022,” it added.