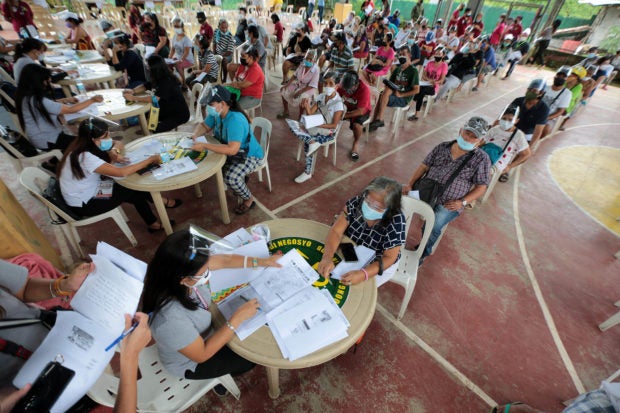 PANDEMIC AID In this photo taken on Aug. 11, residents of Lupang Pangako in Barangay Payatas, Quezon City, receive cash aid from the government’s social amelioration program. The pandemic assistance has been given in cash or through money transfer to families in communities under hard lockdown. —GRIG C. MONTEGRANDE

This figure, according to the SWS, points to an increase from the 10.9 million Filipino families who felt “poor” during the first quarter of the year.

In a survey conducted from June 26 to 29, it was found that 48 percent of families felt “poor,” while 31 percent categorized themselves as “borderline poor.”

Twenty-one percent, on the other hand, considered themselves “not poor,” based on the survey’s results which was released on Tuesday.

The said survey was done through face-to-face interviews with 1,500 adults aged 18 and above sampled nationwide.

The sampling error margins of the survey were ±2.5% for the national percentages, ±5.7% each for Metro Manila, Visayas and Mindanao, and ±4.0% for Balance Luzon.

The SWS said these levels saw a change from a similar poll conducted in April, when 10.9 million or 43 percent of Filipino families felt “poor,” 34 percent considered themselves “borderline poor,” and 23 percent rated themselves “not poor.”

It also noted that “poor” families in all areas increased, especially in Metro Manila and Visayas as shown in the June survey.

“Compared to April 2022, Self-Rated Poor rose in the Visayas from 48 percent to 64 percent, and in Metro Manila from 32 percent to 41 percent,” the SWS explained.

According to the survey, an uptick in the number of families who found themselves poor was likewise recorded in Mindanao and Balance Luzon — from 60 percent to 62 percent, and 35 percent to 36 percent, respectively.

Families who rated themselves “borderline poor” decreased in Visayas from 46 percent to 26 percent, in Metro Manila from 42 percent to 22 percent, and in Mindanao from 33 percent to 31 percent, the survey showed.

But in Balance Luzon, more Filipino families considered themselves “borderline poor” with a rise from 28 percent to 36 percent.

Meanwhile, families who categorized themselves as “not poor” also increased in Metro Manila from 26 percent to 37 percent, and in Visayas from 6 percent to 10 percent.

In Mindanao, however, it remained at seven percent, while it fell in Balance Luzon from 37 percent to 28 percent.

The SWS survey also found that 34 percent of Filipino families considered themselves as “food-poor,” while 40 percent felt “borderline food-poor.”

The number of “food-poor” families increased in Metro Manila, Balance Luzon, and Visayas, but slightly fell in Mindanao, according to the survey.

Read Next
Chinese military to hold live-fire exercises in East China Sea
EDITORS' PICK
What to watch out for when selecting a video surveillance solution
Heads may roll at BOC, says Palace if sugar smugglers are allowed to use recycled import permits
vivo brings to the Philippines a powerful smartphone with a slimmer body, the vivo Y02s for only PHP 6,499
Palace: Biggest supermarkets in PH commit to sell sugar at P70 per kilo
DOH reports increase in daily COVID-19 deaths, mostly unvaxxed
House energy committee chair Arroyo bats for cheap electricity
MOST READ
DepEd to give teachers P5K cash allowance within first week of classes
Alyssa Valdez to miss Creamline’s AVC Cup campaign
Jordan Clarkson arrives in Manila to bolster Gilas Pilipinas
DOJ indicts bank officer in $2.1 billion Wirecard fiasco
Don't miss out on the latest news and information.