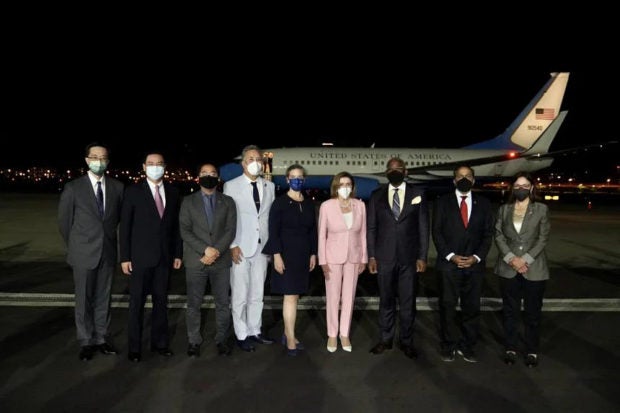 US Speaker of the House Nancy Pelosi (fourth from right) with other officials after arriving at Songshan Airport in Taipei, Taiwan, on Aug 2, 2022. PHOTO: MINISTRY OF FOREIGN AFFAIRS (TAIWAN) via The Straits Times/Asia News Network

WASHINGTON — More than two dozen Republican senators issued a statement in a show of bipartisan support for United States House Speaker Nancy Pelosi’s Taiwan visit shortly after she touched down in Taipei on Tuesday night (Aug 2).

“For decades, members of the US Congress, including previous Speakers of the House, have traveled to Taiwan. This travel is consistent with the US’ ‘one China’ policy to which we are committed. We are also committed now, more than ever, to all elements of the Taiwan Relations Act,” said the statement signed by 26 Republican senators, including Senate minority leader Mitch McConnell.

Mrs Pelosi said in a statement that her visit was one of several congressional delegations to Taiwan, and “in no way contradicts longstanding United States policy”.

Mrs Pelosi elaborated on her position in a commentary published by the Washington Post just after she landed.

She highlighted the Taiwan Relations Act, under which the US is committed to help Taiwan maintain sufficient self-defense capabilities. “Today, America must remember that vow. We must stand by Taiwan, which is an island of resilience,” she wrote, adding that Taiwan’s democracy was under threat from Beijing.

She said: “In the face of the Chinese Communist Party’s (CCP) accelerating aggression, our congressional delegation’s visit should be seen as an unequivocal statement that America stands with Taiwan, our democratic partner, as it defends itself and its freedom.”

The US had sought to downplay the significance of Mrs Pelosi’s visit, insisting ahead of her trip that it did not change America’s policy towards Taiwan and that there was no need for escalation from Beijing.

On Monday, the White House said that Mrs Pelosi has the right as Speaker to visit Taiwan and would make her own decisions, as the US Congress is an independent branch of government.

It stressed that nothing had changed about America’s “one-China” policy, and that Washington does not support Taiwan independence.

“Put simply, there is no reason for Beijing to turn a potential visit consistent with longstanding US policy into some sort of crisis or conflict, or use it as a pretext to increase aggressive military activity in or around the Taiwan Strait,” National Security Council spokesman John Kirby said at a briefing.

“Meanwhile, our actions are not threatening and they break no new ground. Nothing about this potential visit – potential visit which, oh, by the way, has precedent – would change the status quo,” said Mr Kirby, referring to former House Speaker Newt Gingrich’s visit to Taiwan in 1997.

He said that China could potentially engage in “military provocations” such as firing missiles in the Taiwan Strait or around Taiwan, and operations that break historical norms such as large-scale air entry into Taiwan’s Air Defense Identification Zone.

China, which had warned Mrs Pelosi against making the trip, sent fighter jets across the Taiwan Strait earlier on Tuesday, its state media reported.

Washington had earlier declined to confirm whether the trip was happening, due to security reasons.

American stocks dipped slightly on Tuesday morning amid rising US-China tensions as Mrs Pelosi headed to Taiwan, with the S&P 500 dropping half a percent, and the Nasdaq and Dow Jones industrials also lower.

Brookings Institution senior fellow and former US official Ryan Hass said on Twitter that there was a narrative battle between Beijing and Washington over Mrs Pelosi’s visit.

“(China’s) argument is that the US is hollowing out its commitments, using Taiwan to try to control China, and stirring trouble; if there is escalation, it’s America’s fault,” said Mr Hass.

“The US argument is that Pelosi’s visit follows precedent. The US wants to avoid escalation, maintain open channels with Beijing. The US opposes unilateral changes to the status quo, doesn’t support Taiwan independence, and has a consistent policy and approach,” he added.

Still, he said, it was a good thing that US and Chinese officials, as well as US and Taiwan officials, are still in communication with each other.

“The odds of uncontrolled escalation diminish when both sides are able to have candid private conversations and clarify the intentions of the other side’s actions,” he wrote.

Ms Bonnie Glaser, director of the Asia Program at the German Marshall Fund of the United States, said on Twitter that the probability of war or a serious incident was low.

“But the probability that the PRC (People’s Republic of China) will take a series of military, economic, and diplomatic actions to show strength and resolve is not insignificant. Likely it will seek to punish Taiwan in myriad ways,” she said.

Analysts noted that China has started to put economic pressure on Taiwan, given its export ban of 100 Taiwan food brands on Monday, ahead of Mrs Pelosi’s visit.