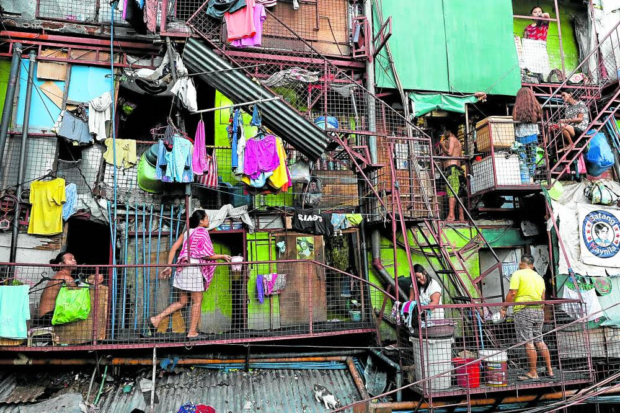 SLUM COMPLEX = Residents of a small apartment building in Tondo, Manila, do their house chores outside their units. A Philippine household needs to earn more than P12,082 a month to meet its members’ basic needs. (REUTERS FILE PHOTO)

A survey conducted from April 19 to 27 showed that 43 percent of Filipinos rated themselves as “poor” while 34 percent felt “borderline poor.”

Twenty-three percent, meanwhile, considered themselves “not poor,” according to the survey, which was released Wednesday.

The SWS said these levels are similar to those in December last year, when 43 percent of families felt “poor,” 39 percent considered themselves as “borderline poor” while 19 percent felt “not poor.”

“The steady Self-Rated Poor between December 2021 and April 2022 was due to increases in Mindanao and Metro Manila, combined with decreases in the Visayas and Balance Luzon (or Luzon outside Metro Manila),” the SWS explained.

According to the survey, the “self-rated poor” families increased in Mindanao, from 43 precent in December 2021 to 60 percent in April 2022.

In Metro Manila, it increased from 25 percent to 32 percent.

The percentage of “self-rated poor” families, however, was reduced from 59 percent to 48 percent in Visayas and 41 percent to 35 percent in Balance Luzon.

Meanwhile, families who rated themselves as “borderline poor” rose in Visayas from 33 percent to 46 percent, the survey showed.

“The April 2022 survey asked the Self-Rated Poor if they ever experienced being non-poor (either not poor or borderline) in the past,” the SWS said.