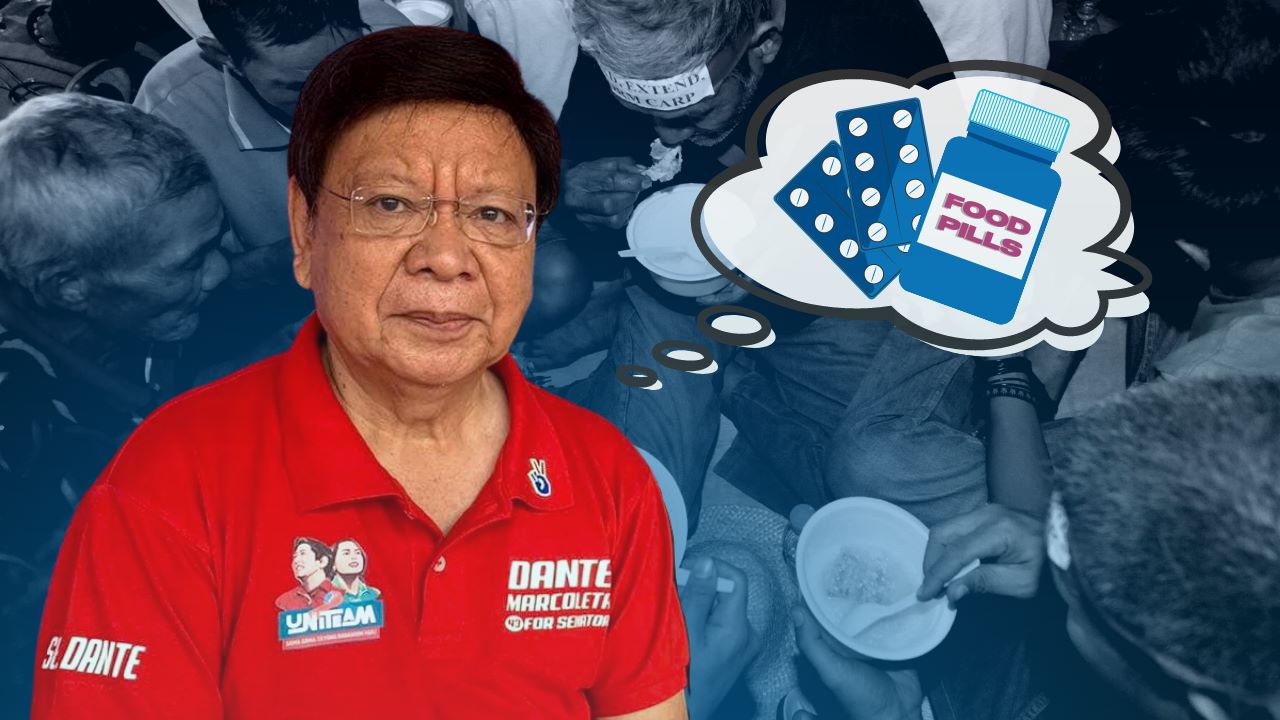 MANILA, Philippines—As millions are seen to sink deeper in poverty because of rising consumer costs, cases of involuntary hunger were also likely to remain high as inflation is making basic needs—food and other necessities—out of reach for the have nots.

According to data from the polling firm Social Weather Stations (SWS), involuntary hunger, which is being hungry and not having anything to eat, was experienced by some 2.9 million Filipino households at least once in the third quarter of 2022. This meant skipping a meal.

Such a dire picture is driving many suggestions, the latest of which comes from party-list Rep. Rodante Marcoleta (Sagip), who blurted out at a confirmation hearing of the Commission on Appointments last Tuesday (Dec. 6) that feeding the poor with “food pills”, like the ones being taken by astronauts in space, could solve the problem.

The idea, derided on social media as hare-brained, does not deserve longer dissertation. But is it even possible? INQUIRER.net takes a closer look.

It was in the second quarter of 1998 when the SWS decided to ask Filipinos about hunger as it saw the serious problem, especially in Mindanao, that year, Mahar Mangahas, SWS president, said.

Since then, household heads in Metro Manila, the rest of Luzon, Visayas and Mindanao, were asked regarding the experience of his or her family in the last three months: “Did it happen even once that your family experienced hunger and not have anything to eat? “

SWS, since the second quarter of 1998, already conducted 95 surveys on hunger, saying that in the last 24 years, the rate hit a record-low of 5.1 percent in the third quarter of 2003.

READ: Charting the cycle of hunger in PH: It’s always there

Looking back, involuntary hunger hit an all-time high in the third quarter of 2020, when 30.7 percent, or 7.6 million households, experienced being hungry and not having anything to eat as COVID-19 lockdowns brought livelihoods to a standstill. 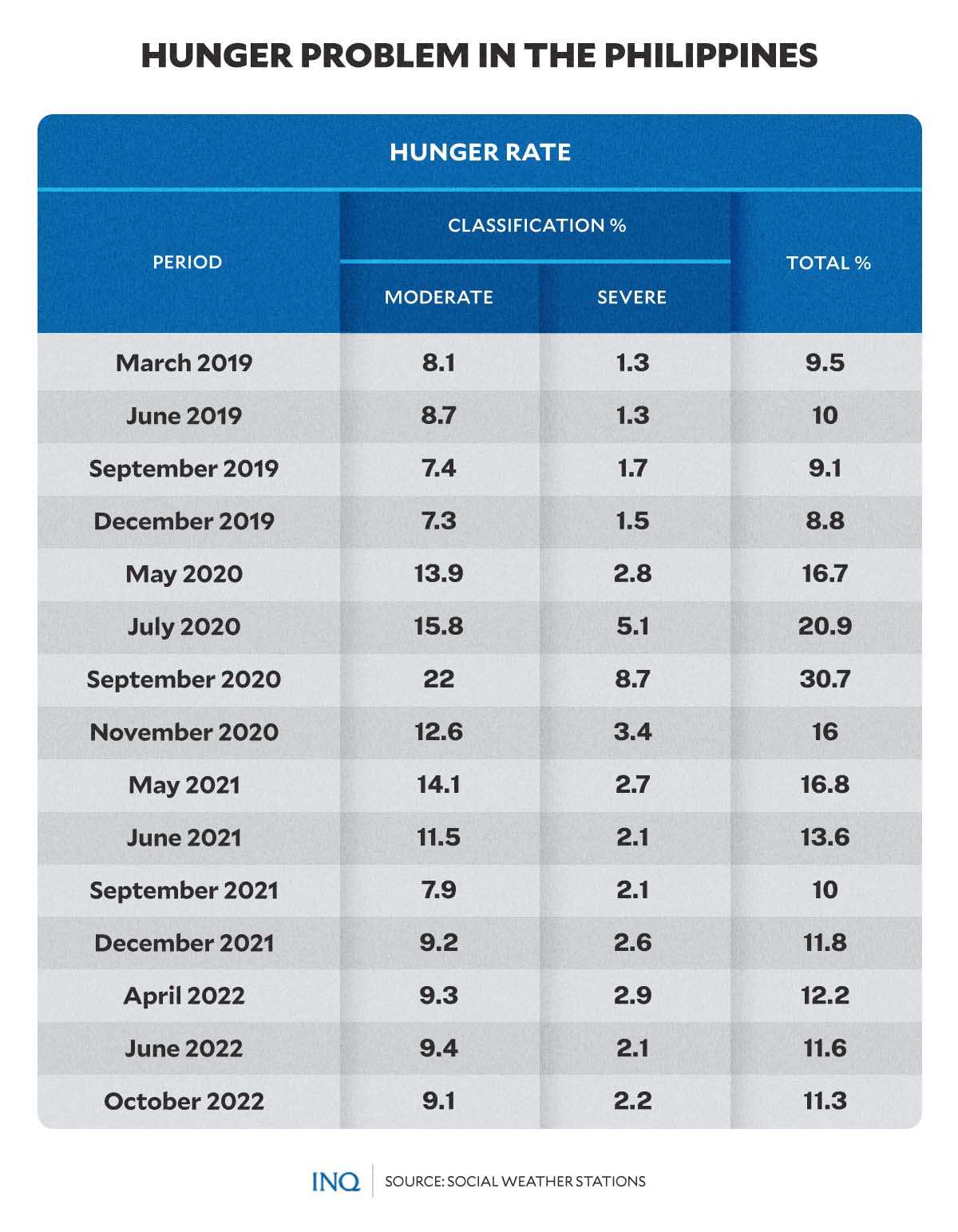 However, it pointed out that the 11.3 percent hunger rate in the third quarter of 2022 was still 1.3 points above the 10 percent, or about 2.5 million households, in the same period last year, and 2 points above the pre-COVID average of 9.3 percent.

Because of this, Albay Rep. Joey Salceda asked President Ferdinand Marcos Jr. to form a food security cluster in the Cabinet, stressing that there is a need for a “more holistic, whole-of-government-way” to address the problem of hunger.

This, as he expressed concern over the still high incidence of involuntary hunger despite the government’s easing of COVID-19 restrictions in a bid to boost economic activities after two years of one of the world’s harshest lockdowns.

“The purpose [of the food security cluster] is to ensure that inter-agency cooperation is undertaken at the highest levels of government,” Salceda, who is an economist by profession, said.

“We do not have a food security cluster yet, although it would be very useful to have one since food and nutrition issues are beyond just agriculture. They encompass trade, industry, demographic, transport, energy, and even climate change and scientific development issues.”

Salceda, who chairs the House ways and means committee, also recommended that Marcos appoint a senior undersecretary or deputy in the Department of Agriculture (DA), of which the President is also the concurrent head.

Aside from the DA, the Bureau of Customs, and the Departments of Transportation, Science and Technology, and National Defense should be part of the food security cluster, Salceda added.

But as the Commission on Appointments held a confirmation hearing for Science and Technology Secretary Renato Solidum Jr., a new idea to address the problem of hunger, especially among the poorest of the poor, was broached.

Stressing that astronauts survive in space even without cooked meals, Marcoleta said the provision of food pills that could last for days or months, like what astronauts have in space, may address the high incidence of hunger.

“I’m thinking aloud that if we could invent food that they can eat, I will give it to our poor countrymen. Even for months that they don’t eat, they will not die,” Marcoleta said last Tuesday (Dec. 6).

He explained that there is a food pill that could be taken only once, but with effects that could last for days or weeks: “Because when astronauts eat it, it will last for several days, if not months.”

“This is just palliative. Meaning to say, we just have to fill up the gap. In case we can help the poorest of the poor, you can invent a pill or whatever, and I will accept it,” he said.

But at present, he said such food pills are not available in the Philippines, which does not have astronauts.

“If the poor can take the pill, they can go two weeks without buying food or cooking, and that is a huge deal. Can we make something like that?” Marcoleta said, stressing that the “poorest of the poor really have nothing to eat.” He did not say where he got his information, though.

Solidum said Filipino scientists have not developed such a food form, explaining that there is only food, which has a shelf life of six months, that is given to Filipinos hit by disasters.

However, he said the Department of Science and Technology would look into it and assured the Commission on Appointments’ committee that food security is a concern of the department.

But contrary to what Marcoleta said, the National Aeronautics and Space Administration (Nasa) stated that astronauts eat three meals a day—breakfast, lunch and dinner.

Likewise, it said on its website that there are nutritionists who ensure that the food that astronauts eat while in space provides them with a balanced supply of vitamins and minerals. 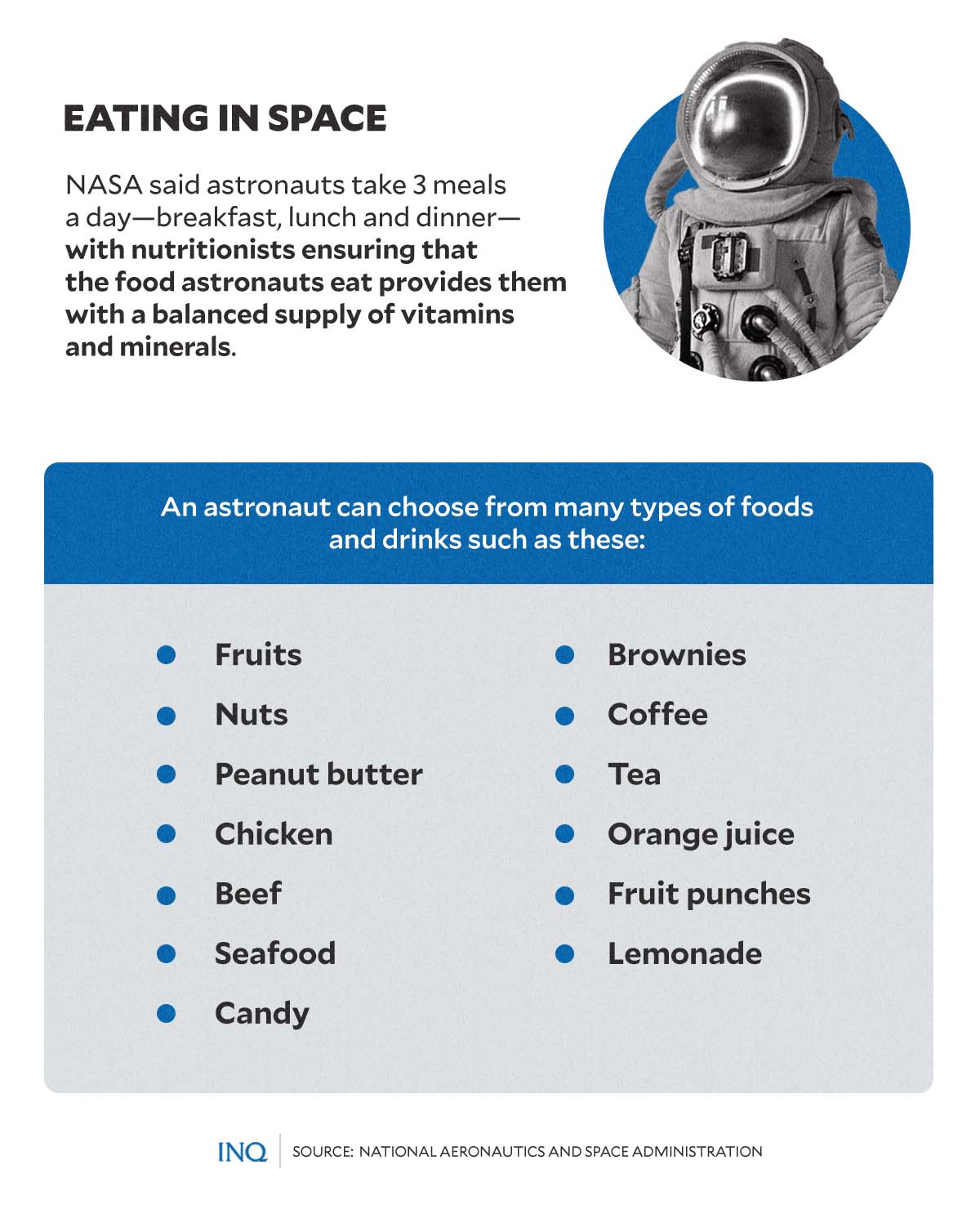 But preparation varies with the food type, it said. Some foods can be eaten in their natural forms, like brownies and fruit, while there are those that require adding water, such as macaroni and cheese or spaghetti.

“An oven is provided in the space station to heat foods to the proper temperature. There are no refrigerators in space, so space food must be stored and prepared properly to avoid spoilage, especially on longer missions.”

Condiments, like ketchup, mustard and mayonnaise, are provided. Salt and pepper are available but only in liquid form. This is because astronauts can’t sprinkle salt and pepper on their food in space.

It explained that salt and pepper would simply float away. There is a danger they could clog air vents, contaminate equipment or get stuck in an astronaut’s eyes, mouth or nose.

“As on Earth, space food comes in disposable packages. Astronauts must throw their packages away when they have finished eating. Some packaging actually prevents food from flying away.”

NASA said the food packaging is designed to be flexible and easier to use, as well as to maximize space when storing or disposing of food containers.

Mangahas said while poverty and hunger are different, they are related, adding that not all of the poor go hungry, although it is more common for them to go hungry than those who rate themselves as not poor.

READ: Left with nothing: Survey numbers show hunger worse among those sinking deeper in poverty

As stressed by the think tank Ibon Foundation, the government needs to prioritize the actual conditions of the people and come up with real solutions to boost the economy and address the worsening jobs crisis and poverty.

“Immediate steps towards these are providing substantial ayuda to the poorest households, implementing wage hikes, lowering prices such as by removing value-added and excise taxes on oil, and ensuring support and subsidies for small business and producers.”

Addressing problem at its roots

The Food and Agricultural Organization of the United Nations (FAO) had said when it comes to the supply side, “measures to mitigate hunger include increasing food production capacity and productivity, enhancing efficiency of logistics and food delivery, public infrastructure, implementation of the food-for-school program are needed.”

While on the demand side, programs that aim at putting money in poor people’s pocket by providing skills, creating employment opportunities for poor and out-of-school youth, and improving access to micro-finance are required to address the problem of hunger.

This, as the United Nations Children’s Fund stressed that “hunger is the leading cause of death in the world.”

READ: No one should go hungry

“Our planet has provided us with tremendous resources, but unequal access and inefficient handling leaves millions of people malnourished. If we promote sustainable agriculture with modern technologies and fair distribution systems, we can sustain the whole world’s population and make sure that nobody will ever suffer from hunger again.”