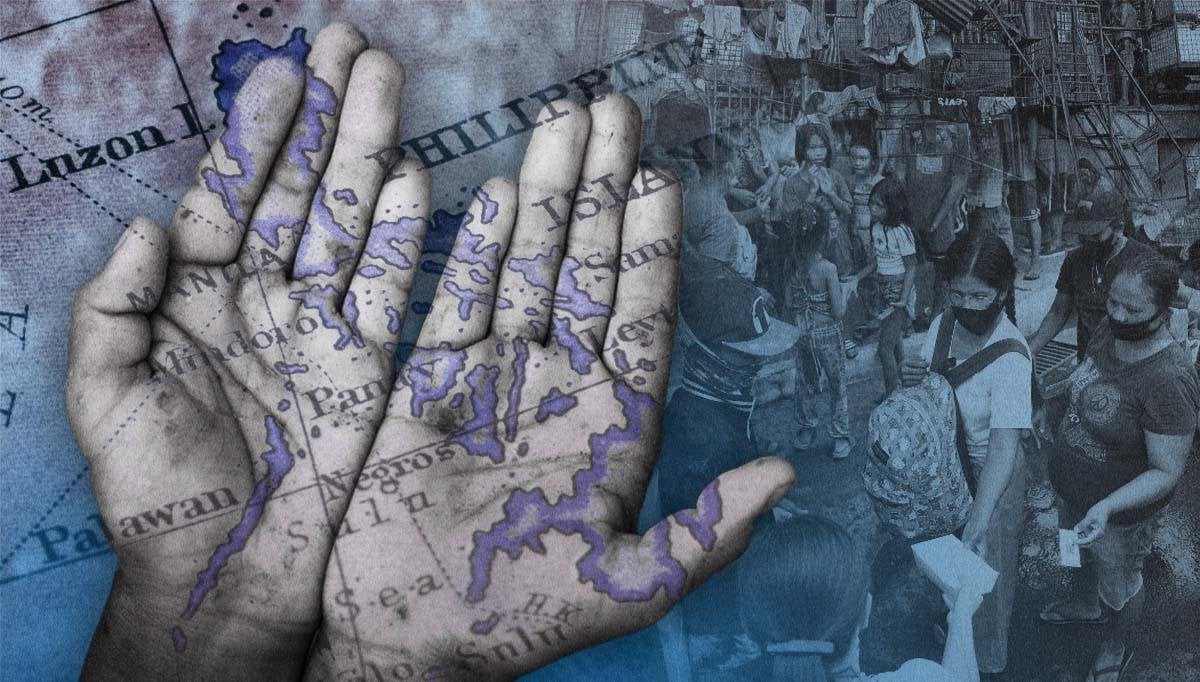 MANILA, Philippines—This week, the Philippines is celebrating the National Week for Overcoming Extreme Poverty, which is mandated by Proclamation No. 717 to encourage Filipinos from all walks of life to take part in the fight against extreme poverty.

It was signed on October 18, 2004 by then President Gloria Macapagal-Arroyo, who at that time said eradicating extreme poverty lies not in government alone, but in all sectors of society.

But 18 years since it was issued, millions of Filipinos are still living in poverty, with the Philippine Statistics Authority (PSA) saying that last year, 3.50 million families or 19.99 million individuals were considered poor.

This year, as “inflation shock” and high interest rates are seen to stall economic growth in 2023, an economist said millions of Filipinos in poor and distressed conditions are “set to have more difficult times ahead.”

This, as the National Economic Development Authority (NEDA) said it was concerned, especially, about higher inflation, stressing that analysis would indicate that sustained increases in inflation in 2022 and 2023 will cause a slowdown in economic growth. 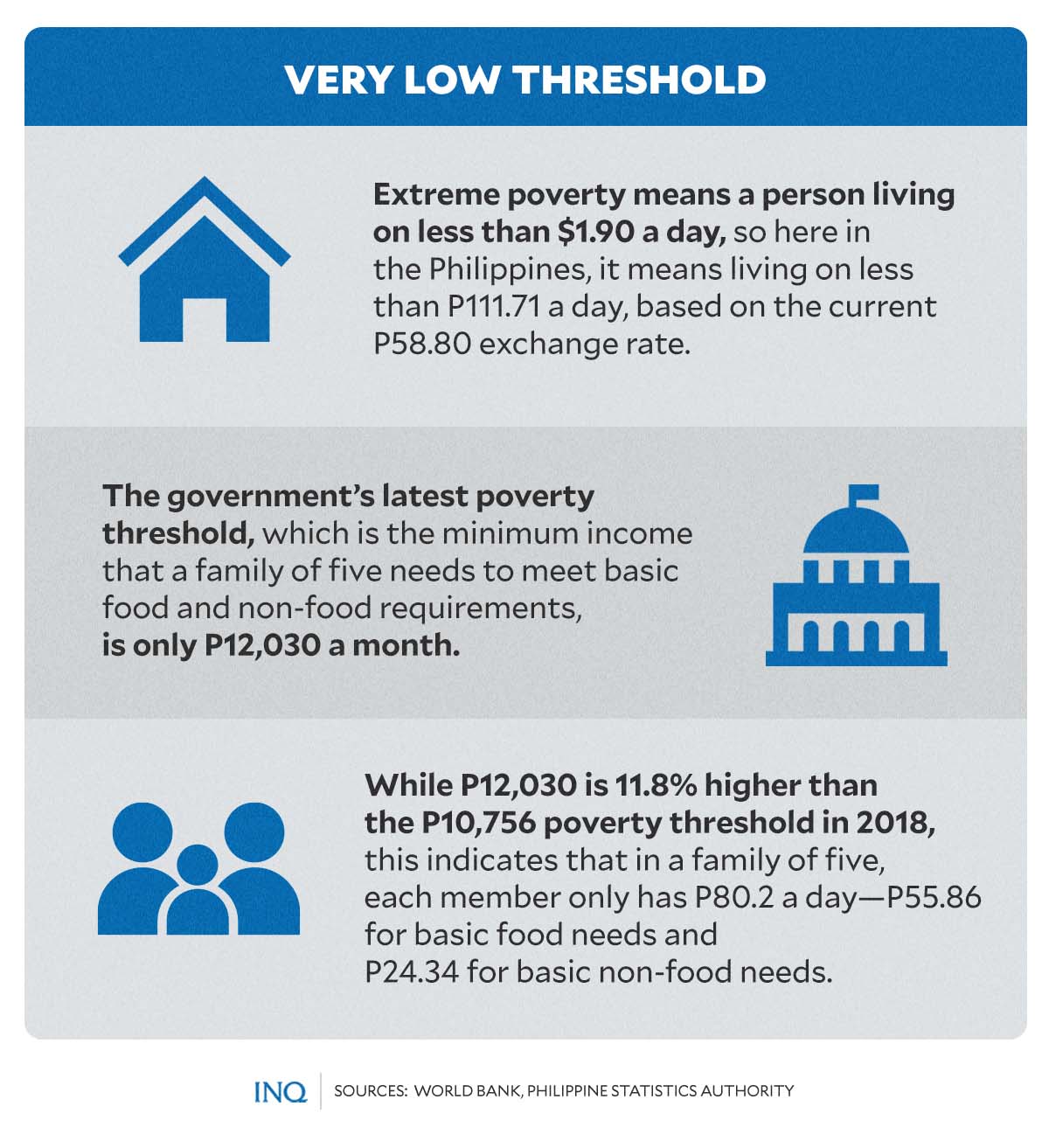 Last Tuesday (Oct. 18), Socioeconomic Planning Secretary Arsenio Balisacan said this will translate into a gross domestic product (GDP) level that is 0.6 percent lower than the expected level “had there been no sustained inflation shock.”

While Balisacan said government prospects remained bright, the Philippines cannot escape the effects of challenges that are being felt all over the world, especially the rising prices of commodities because of Vladimir Putin’s war on Ukraine and natural disasters.

Sonny Africa, executive director of the local think tank Ibon Foundation, stressed that the expected growth slowdown is “a sign that the prospects for real recovery are getting even weaker.”

“The worrying implication of this is that joblessness and weakening family incomes may get worse even before they get better,” he told INQUIRER.net on Wednesday (Oct. 19).

This, as Africa stressed that high inflation and rising interest rates, “which choke economic activity,” are just a few of the many factors that constrain the growth of an economy.

“There is also high disguised joblessness where the majority of job creation is low earning self-employment and informal work, collapsing household incomes and savings where families have no buffers to maintain consumption levels,” he said.

Ibon Foundation had revealed that most of the employment created from 2020 to 2021 was of very poor quality, with people struggling to “make a living in whatever way they could.”

As Africa stated, the possible slowdown in economic growth will only reflect how aggregate demand and, especially, household consumption spending are being repressed by all these factors.

While the PSA said the poverty incidence rate in the Philippines grew from 16.7 percent in 2018 to 18.1 percent in 2021, Ibon Foundation said many poor Filipinos are left out of the data.

READ: PH poverty: You’re not poor if you spend more than P18.62 per meal

This, as the think tank stressed that the way the government counts the poor “grossly underestimates” poverty in the Philippines, saying that the statistics can only be taken to mean those in extreme poverty. 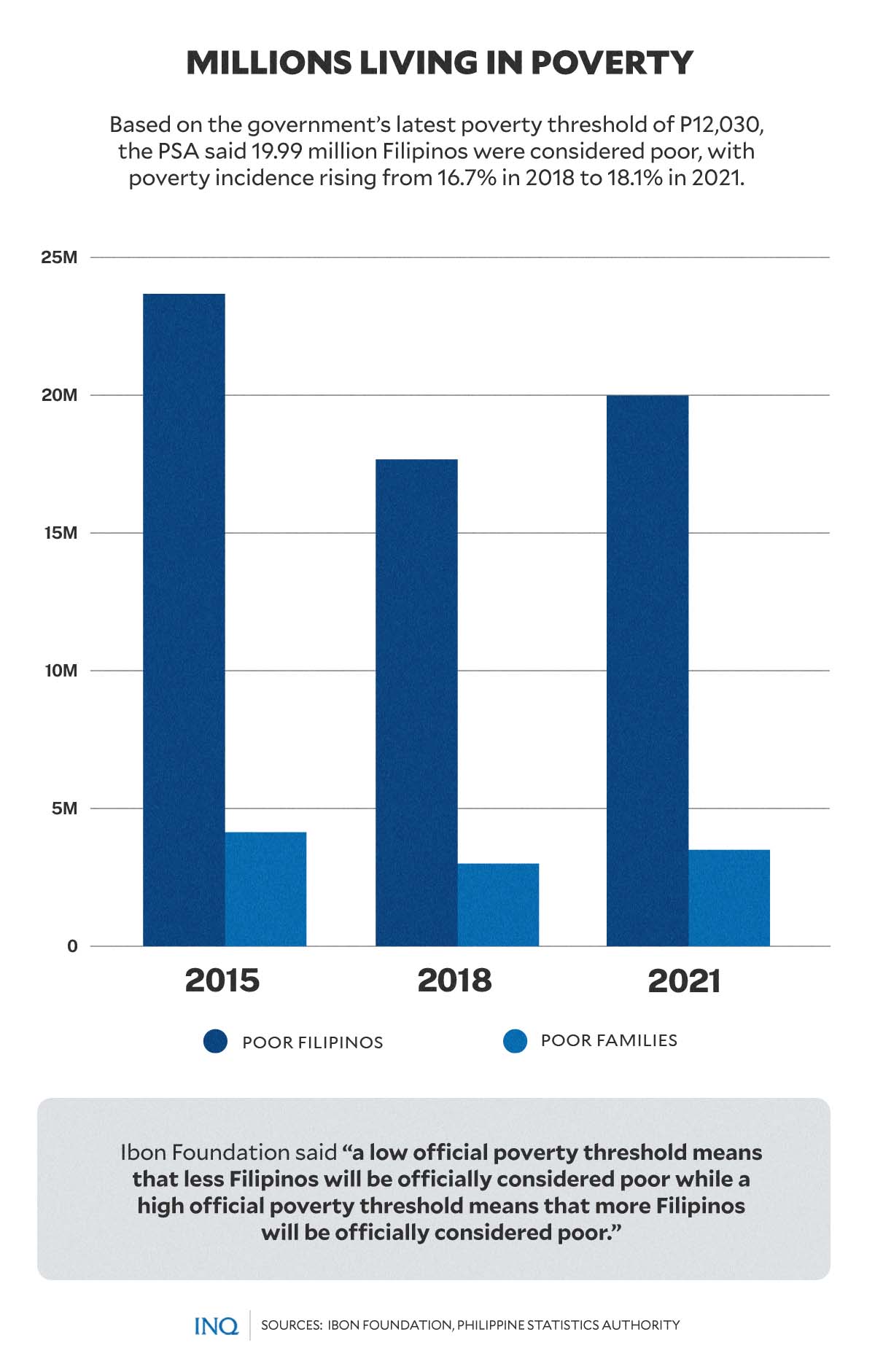 But the government’s latest poverty threshold, which is the minimum income that a family of five needs to meet basic food and non-food requirements, was only P12,030 a month.

How essential is GDP growth?

It said several research and case studies provided evidence that sustained growth is critical to making faster progress toward achieving the Millennium Development Goals—and not only the first goal of halving the percentage of people living on less than $1 a day.

“Growth can generate virtuous circles of prosperity and opportunity. Strong growth and employment opportunities improve incentives for parents to invest in their children’s education by sending them to school,” it said.

The OECD stressed that this may lead to the emergence of a strong and growing group of entrepreneurs, which should generate pressure for improved governance, saying that strong economic growth advances human development and promotes economic growth.

Remember that when Proclamation No. 717 was signed, the Philippines had already made the commitment of halving hunger and extreme poverty within the decade to attain the Millenium Development Goals. 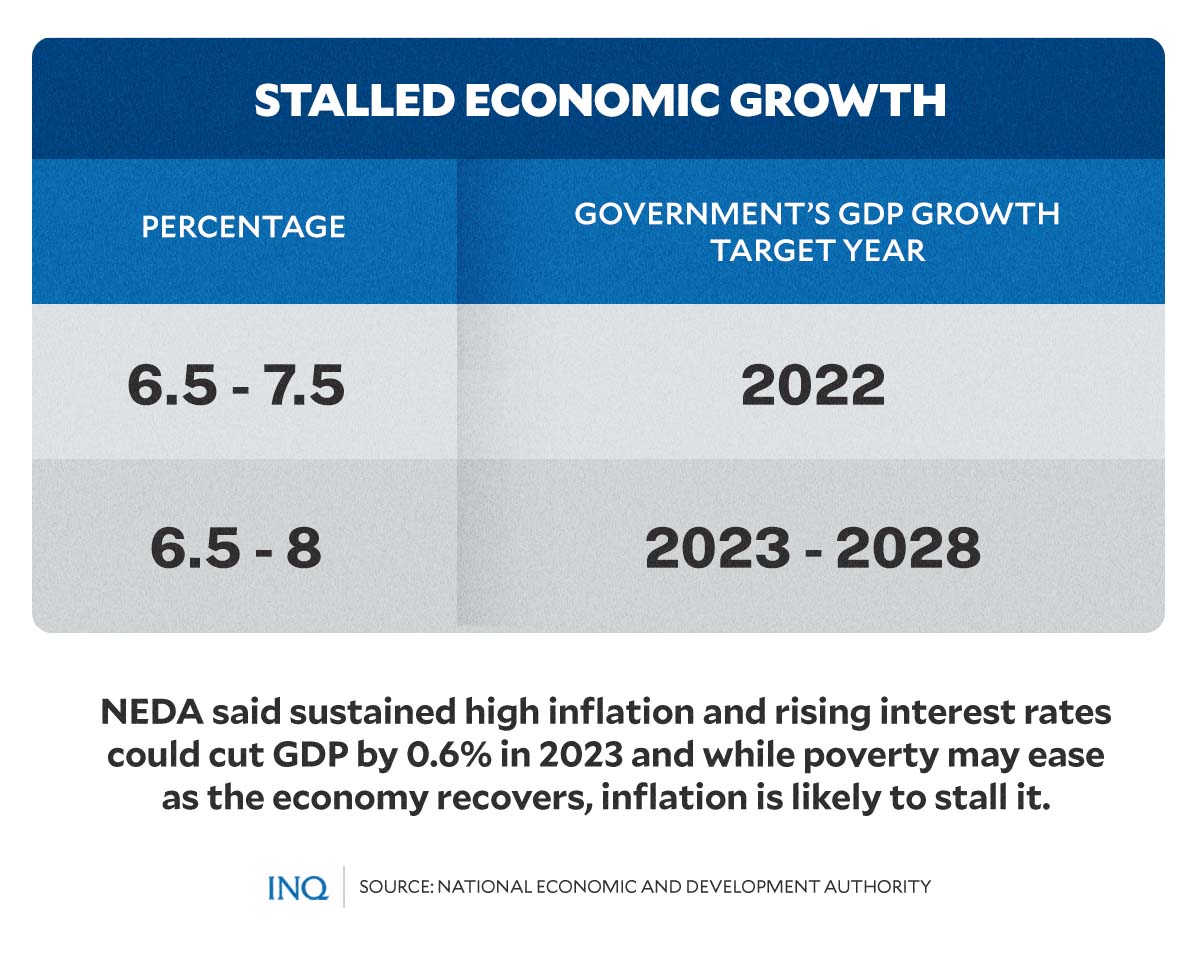 Likewise, when President Ferdinand Marcos Jr. delivered his State of the Nation Address last July, he said he would want to end his six-year presidency in 2028 with a nine percent or single-digit poverty rate.

Africa had said economic recovery is stalling with a quarter-to-quarter GDP contraction:

“It will also be recalled that economic growth was slowing in each of the three years even before the pandemic lockdowns hit, so there’s not even any pre-pandemic growth momentum to go back to.”

For Africa, “it is more urgent than ever for the government to intervene to boost family incomes and spur economic activity.” However, he said the proposed 2023 budget is “an austerity budget whose increase does not even keep up with inflation.”

The Bangko Sentral ng Pilipinas is expecting inflation to average 5.6 percent this year. The economic team is expecting the rise in inflation to be “temporary”, as it is likely to slow down and return to the medium-term target of 2 percent to 4 percent.

As a short-term solution to the high readout, Balisacan said the government was looking at providing financial assistance to the most affected sectors.

“Part is providing assistance to most vulnerable groups by continuing the subsidy programs for example that are currently extended by the Department of Social Welfare and Development, assistance to farmers and fisherfolk, to drivers and so on and so forth,” he said. 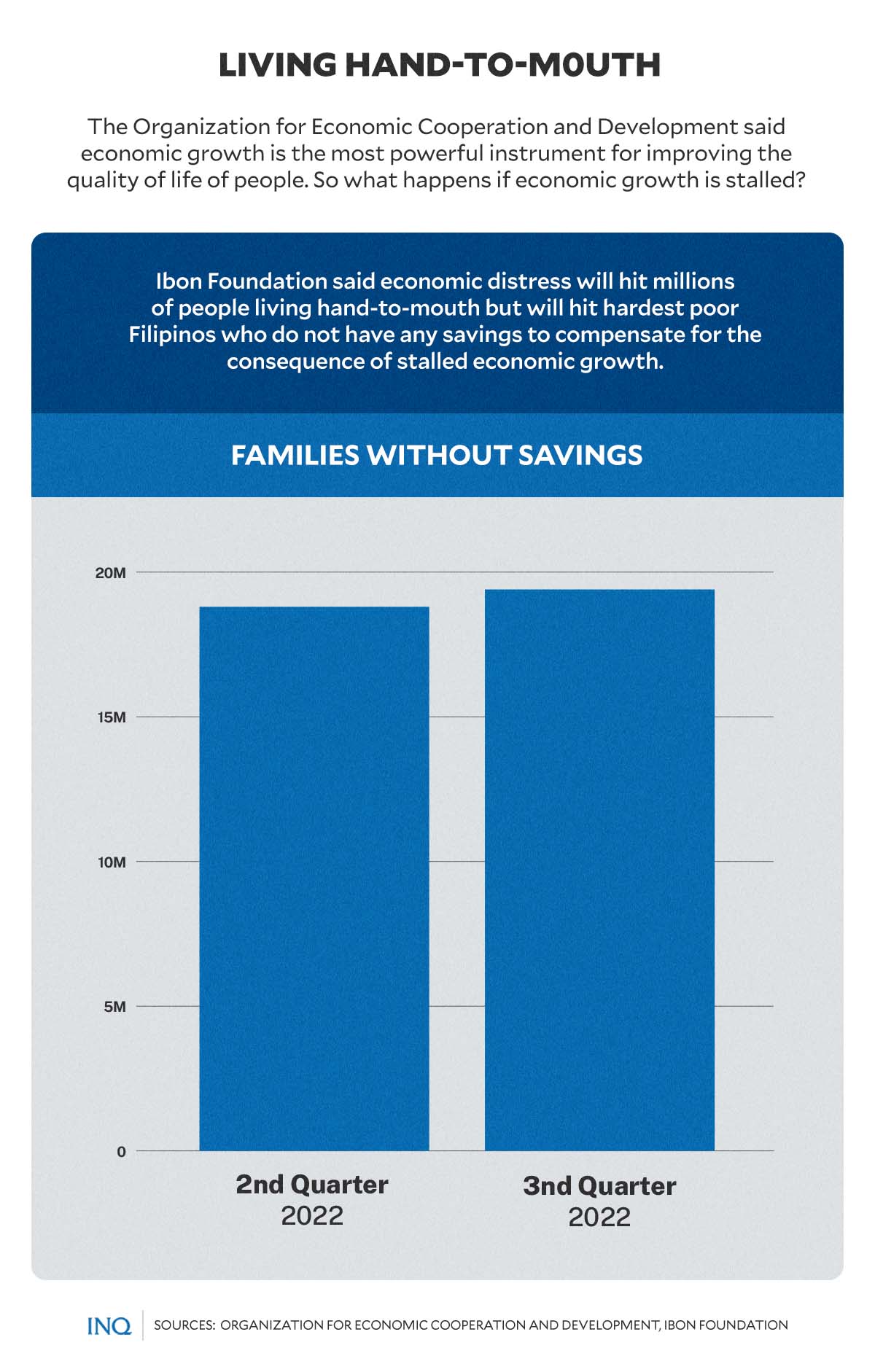 “We seek solutions for short term challenges, we are very careful that we do not compromise our medium-term goals which is to put the economy to a higher growth trajectory to achieve more jobs and reduce poverty—that’s the overall architecture of the plan.”

This, as Ibon Foundation stressed that joblessness and falling incomes have increased the number of families without savings since the start of the year—increasing by a million to reach 19.4 million as of the third quarter.

It said “accelerating inflation means even less consumption for these millions of families who do not have any buffers to compensate for any rise in prices of basic goods and services.”

For Africa, “the dampening of jobs and incomes unfortunately means that poor and distressed Filipino families are being made to bear the burden of adjusting to a crisis that is not their making.”

RELATED STORY: Rich-poor divide in PH among worst in region