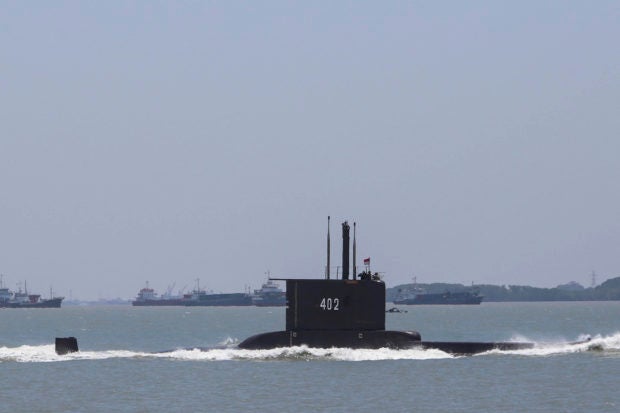 This photo taken on October 5, 2017, shows the Indonesian Cakra submarine KRI Nanggala sailing out from the port in Cilegon, Banten. AFP

MANILA, Philippines — The Department of National Defense (DND) on Wednesday said France had not offered submarines “in exchange for permission” to survey Philippine waters. It also said that buying the underwater vessel is not among the country’s current priorities.

“We would like to clarify that, contrary to published reports, DND Officer-in-Charge Senior Undersecretary Jose C. Faustino Jr. said in a recent interview that the procurement of submarines is actually not yet a priority for the Department as of now,” DND spokesperson Arsenio Andolong said in a statement.

Andolong admitted that many suppliers had expressed interest in selling submarines in the country, including France.

But “there is no truth to the report that there is an offer to the Department for submarines in exchange for permission to explore Philippine waters,” he added.

The DND official also noted a 2016 arrangement with France for defense cooperation although, he pointed out,  there was never a mention of such a proposal during France’s engagements with the defense agency.

“We do have a 2016 Arrangement with France on defense cooperation, and in the course of the Department’s engagements with representatives from France, there was never a mention or discussion of such a proposal,” he said.

In a press briefing, Faustino said the country could not easily take such an offer for submarines in exchange for consent to explore Philippine waters because there must be a “constitutional process” to do such a thing.

“It’s not that easy because we have constitutional processes,” the DND officer-in-charge said.

To recall, former DND Secretary Delfin Lorenzana said the Philippines is looking to acquire French-made submarines and that there has been cooperation between Manila and Paris for training on submarine operation in a bid to prepare the country should it finally acquire its own sub.

READ: Philippine Navy eyes to have first submarines by 2027

The Philippines, an archipelago with one of the world’s longest coastlines and which has an ongoing maritime dispute with neighbors, is crawling in the submarine race with other Southeast Asian countries.

Currently, Indonesia, Malaysia, Vietnam, and Singapore have a submarine in their arsenal.