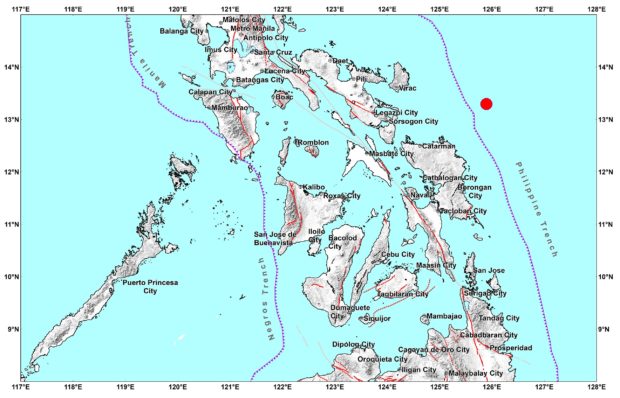 A magnitude 5.6 hits Northern Samar on Friday afternoon, December 9, 2022, according to state seismologists. Photo from Phivolcs

MANILA, Philippines —  A magnitude 5.7 earthquake struck Northern Samar on Friday afternoon, according to the Philippine Institute of Volcanology and Seismology (Phivolcs).

State seismologists said the temblor occurred at 2:33 p.m. and that it located its epicenter 114 kilometers northeast of Mapanas town.

Up to Intensity IV was felt in Palapag, Northern Samar, Phivolcs noted, explaining that such a force is “moderately strong” and can be “felt generally by people indoors and by some people outdoors.”

The earthquake was tectonic in nature and had a depth of focus of 33  kilometers, according to state seismologists, who likewise said no damage or aftershocks may be expected from it.

On Wednesday, a magnitude 5.3 earthquake hit Camarines Norte, which was felt in parts of Metro Manila as well.