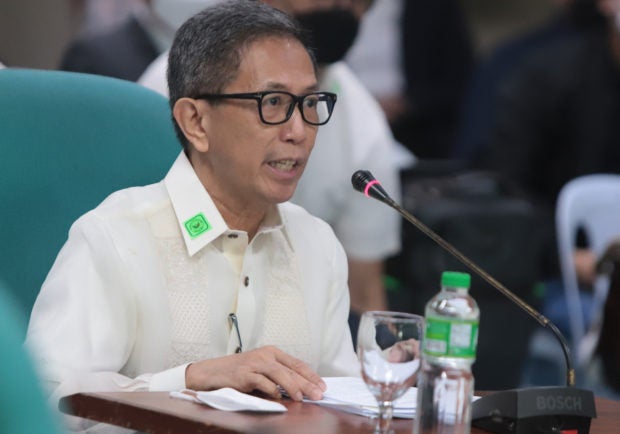 Department of Energy Sec. Raphael Perpetuo Lotilla’s ad interim appointment to the post fails to get the nod of the Commission on Appointments Committee on Energy Tuesday, Nov. 29, 2022 due to lack of time. (File photo from the Senate Public Relations and Information Bureau)

MANILA, Philippines – A Commission on Appointments (CA) panel has again suspended the confirmation of Raphael Lotilla as Energy Secretary as he has yet to answer more policy questions to be raised by SAGIP Rep. Rodante Marcoleta.

The CA energy panel resumed deliberations on the ad interim appointment of Lotilla on Tuesday after it was suspended last Wednesday, Nov. 29, due to lack of time.

For the same reason, Lotilla’s confirmation hearing was deferred upon the suggestion of Marcoleta, who said he still had more questions to ask about the Department of Energy’s (DOE) expected direction with Lotilla at its helm.

“There’s still a length of policy questions. That’s why I am conferring with the chairman if the secretary can return tomorrow and if he can be accommodated,” he said, speaking in a mix of English and Filipino.

Marcoleta earlier sounded the alarm about Lotilla’s stance on the rising cost of electric rates, particularly when the DOE chief said he “draws the line between policy-making and economic regulation.”

“I am a little bit unsettled by this answer because it seems to me that the hands of the secretary are tied simply because he’s trying to draw a line between himself and the Energy Regulatory Commission (ERC), citing the independence of the ERC from the DOE based on Electric Power Industry Reform Act (Epira) Act,” he said.

Marcoleta pressed for Lotilla to cross the line he had earlier drawn, citing provisions of the Epira law, which ensures that public interest prevails in setting and making affordable the rates and services of electric utilities and power providers.

Lotilla maintained that the ERC “cannot be interfered with” on matters of rate-setting, but he noted that this “does not mean the DOE cannot issue policy as clarified by the Supreme Court and therefore, we’ll be able to address a number of issues affecting our fellow Filipinos.”

But among those he said the DOE can do to address soaring power rates are leveling out the playing field to attract more competition and investments, and improving the ability of distribution utilities to manage power supply agreements.

Directed toward Lotilla, Marcoleta raised more heaps of questions and concerns on several other energy-related issues before he sought to defer the Energy Secretary’s confirmation hearing.

Senate President Juan Miguel Zubiri then asked for a minute suspension and upon its resumption, Senate President Pro Tempore Loren Legarda, who chairs the committee, said the continuation of Lotilla’s confirmation hearing would be scheduled for Wednesday.

CA Majority Leader Luis Raymund Villafuerte floated the official motion to defer deliberations on Lotilla’s ad interim appointment, which no one objected to.

Your subscription could not be saved. Please try again.
Your subscription has been successful.
Read Next
US judge dismisses suit against Saudi prince in Khashoggi murder
EDITORS' PICK
Only 38% of students grade 1 to 3 prefer local language as medium of instruction — Pulse Asia
House energy committee chair Arroyo bats for cheap electricity
Philippines central bank to focus on inflation at next policy meeting – governor
Omega Speedmaster super racing: Tiny device massive change
vivo Philippines offers a free bouquet of flowers and a premium necklace perfect for Valentine’s Day
ACT slams Edca on 124th anniversary of PH-American war: ‘Tila hindi umalis ang mananakop’
MOST READ
Philippines’ own ‘Anna Delvey’ arrested in Taguig City
Pokwang admits she lied about cause of split with Lee O’Brian: ‘Umasa akong aayusin pa niya’
Vice Ganda asserts all is well with Karylle, takes swipe at ‘kuya’ who chimed in to be ‘trending’
OWWA chief Arnell Ignacio: Socmed manager behind post on my love life
Don't miss out on the latest news and information.