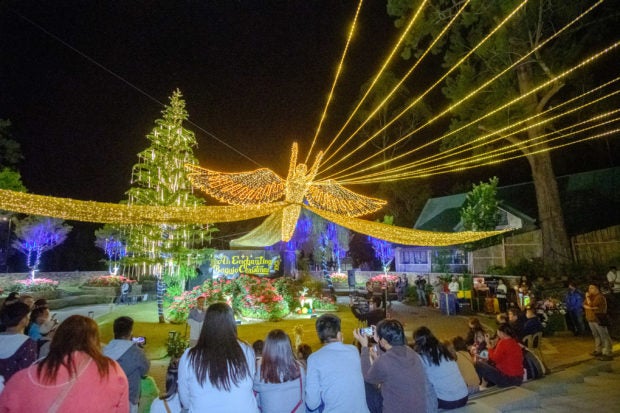 PARK LIGHTS | The Baguio City Council is imposing a P100 environmental fee for tourists visiting the Botanical Garden to help build a trust fund that would maintain and improve the summer capital’s other parks. The Botanical Garden, its sections adorned with colorful lights, has been recently turned into a Christmas village that has drawn tourists and residents. (Photo by NEIL CLARK ONGCHANGCO)

BAGUIO CITY, Benguet, Philippines — The city council agreed to impose a P100 entrance fee on tourists visiting the Botanical Garden as the first step in building a trust fund for maintaining and improving more than 16 neighborhood parks and larger parks in the summer capital.

On Monday, the council passed on second reading a draft ordinance that originally proposed a P150 fee at the 3-hectare Botanical Garden instead of the current P10 being collected from each visitor. The higher rate is equivalent to the environmental fee mandated by Baguio’s Environment Code.

The initial plan was to raise fees for adult residents from P10 to P50 and to charge P25 for every teenager and child over the age of 12. Seniors and persons with disabilities would be granted 20-percent discounts (or a gate charge of P40).

But Councilor Levy Lloyd Orcales urged lawyer Rhenan Diwas, head of the city environment and parks management office (Cepmo), to devise a fee structure based on the economic principle of “price discrimination.”

Orcales said Diwas must design fees based on each sector’s “willingness or capacity to pay.”

Some councilors expressed reservations about the steep increase from P10 to P100 or P150. But many of their colleagues said they were willing to raise the tourist fee to P150 or P200 once Diwas submits a feasibility study that would justify an even higher charge.

At the council session, Diwas said only the Botanical Garden would require an entrance charge. Other parks, including those located in smaller communities like Bayan Park in Aurora Hill would remain free.

But other Baguio destinations, like the former Diplomat Hotel, already charge P100. The same fee is collected from visitors who queue for “selfies” at privately owned tourist attractions, such as the recently closed Igorot Stone Kingdom.

Diwas said the city has been generating P800,000 monthly from the Botanical Garden’s P10 fee, which does not make up for the cost of maintaining its flower beds.

He said park management was among Baguio’s lowest priorities given the need for public service projects like a modern septic system and wastewater treatment facilities and the demand to revive the economy.

Back in 2019, the city’s premier green space, Burnham Park, was supposed to be the first to receive a massive upgrade using a P400-million grant from the Tourism Infrastructure and Enterprise Zone Authority.

But it was withdrawn when the national government poured most of its resources into managing the impact of the COVID-19 pandemic.