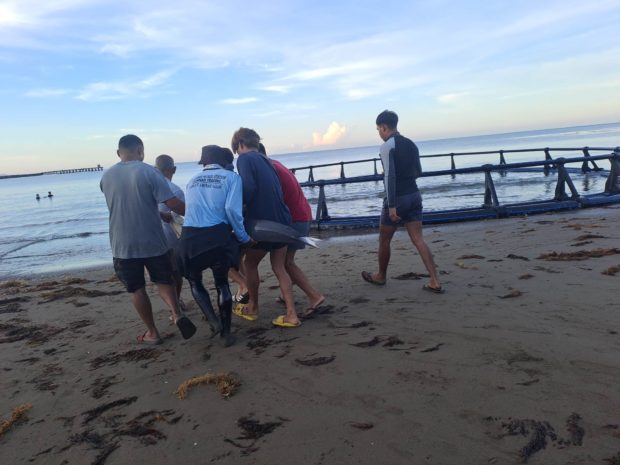 SAFE WATERS Personnel of the Bureau of Fisheries and Aquatic Resources (BFAR) take a rescued dolphin to shallow waters in the agency’s facility in Narvacan, Ilocos Sur, as the marine mammal undergoes rehabilitation on Monday. This dolphin is among two rescued in the province’s coastline this week. —PHOTO COURTESY OF BFAR

SAN FERNANDO CITY­—Five adult dolphins washed ashore in different towns in Ilocos Sur province on Sunday and Monday, but three of them died, and marine mammal experts were pointing to blast fishing as the possible cause of the mass stranding.

Hasmine Chogsayan, veterinarian at the Bureau of Fisheries and Aquatic Resources (BFAR) in the Ilocos region, said the two surviving dolphins were taken to a BFAR facility in Narvacan town for rehabilitation.

One of them, which was later named “Maxine San Juan,” was found by fishermen in San Juan town at 3 p.m. on Sunday.

Chogsayan said the dolphin, a melon-headed whale (Peponocephala electra), was later released back to the sea but returned to the shore, prompting the fishermen to bring it to the BFAR facility.

The other surviving dolphin was found on the beach of Magsingal town on Monday morning, according to Christopher Abalos, a BFAR staff member.

Abalos said the dolphin, a pygmy killer whale (Feresa attenuata) that was named “Ellen Magsingal,” was also released back to the sea by the villagers, but it returned to the shore a few hours later.

The dolphin was eventually sent to the BFAR facility but could not be contained in a tank, forcing the BFAR staff to rehabilitate it in the shallow seawater.

“The two dolphins have robust bodies, and their breathing patterns are within the (normal) range. They are regaining their buoyancy, so we are considering releasing them back to the sea,” Chogsayan said.

She said the three other dolphins, which were all pygmy killer whales, were found stranded in the towns of Caoayan and Santa.

According to Chogsayan, one of the dolphins was already dead when found on a beach in Santa, while the other two either died while being taken to the BFAR facility or while being rehabilitated.

“Necropsy showed they were not ill. The two surviving ones are also healthy, so it’s most likely that they were all victims of [the impact of] blast fishing,” she told the Inquirer.

She said the dolphins could have been disoriented due to injured eardrums caused by rampant dynamite fishing, a destructive and prohibited method of fishing that uses explosives.

Records from the Philippine Marine Mammal Stranding Network (PMMSN) showed that this year alone, there had been 27 stranding events in the Ilocos region, excluding the recent incidents.

“This is the second unusual mortality event, most likely due to dynamite fishing,” said Lemnuel Aragones, president of PMMSN.

In March this year, PMMSN also noted an “unusual” number of dolphins that beached along the Lingayen Gulf in Pangasinan province.

According to BFAR, seven short-finned pilot whales (Globicephala macrorhynchus) were stranded in different coastal towns of Pangasinan between March 15 and March 18. One of them was already found dead at Barangay Germinal in Bolinao town.

In a previous interview, Aragones said a stranding could take place when a pod of dolphins scampers everywhere after hearing a blast.

He said the marine mammals would usually lose their acoustic sensor due to the deafening noise, causing them to swim straight until they reach the shallow water and get stuck there. INQ