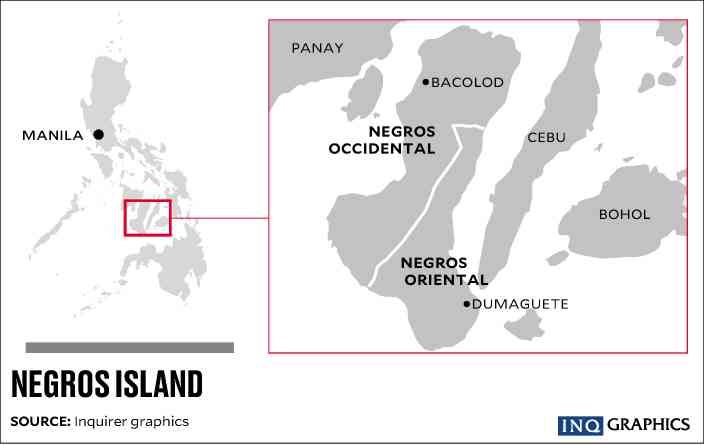 CEBU CITY—The two top provincial officials of Negros are on opposite sides on moves to reestablish the Negros Island Region (NIR).

“The development gave us so much hope that the NIR will happen,” he told the Inquirer on Tuesday.

But for Negros Oriental Gov. Roel Degamo, the NIR should not be revived.

Degamo, who attended online the Regional Development Council (RDC) in Central Visayas meeting in Cebu City on Tuesday, cited cultural differences between Negros Oriental and Negros Occidental as among the reasons why the NIR should not be brought back.

He said residents of Negros Oriental prefer to be a part of the Cebuano-speaking people of Bohol, Cebu and Siquijor provinces.

“I see no problem with being a part of Central Visayas. There’s no issue there,” he said

Degamo said the matter of creating the NIR should not be rushed as there were a lot of issues that needed to be ironed out.

“So as governor of Negros Oriental, I believe it must be done properly. There are a lot of pros and cons in the creation of the NIR,” Degamo said.

Sought for comment on the issue, Bohol Gov. Aris Aumentado, RDC chair, said the council would not take a position yet on the creation of the NIR.

Aumentado said the NIR might be difficult to realize now since Degamo already expressed his opposition to the matter.

“If they do not want to unify under the NIR, then who are we to say and push for it when those involved are not interested,” he said.

Plans to revive the NIR continued under the administration of President Marcos.

On Monday, the Senate committee on local government approved five bills seeking to establish the NIR.

Sen. Joseph Victor “JV” Ejercito, who chairs the committee, said people of Negros Occidental and Negros Oriental needed the NIR so that services of the national government could be accelerated and brought closer to them.

“We also believe that this will also be the way to make the region more vibrant,” he said in a statement sent to Inquirer.

Ejercito, whose mother is from Bacolod City, said the NIR bills in the Senate would be consolidated to boost the efficiency of public service in these areas.

Zubiri, whose father is from Kabankalan City, Negros Occidental, said there was a growing clamor for the establishment of the NIR since residents of Negros Occidental and Negros Oriental still needed to travel to either Iloilo or Cebu to transact with the regional offices of several national government agencies.

“It’s the ease of doing business for government transactions. I don’t think it’s going to cost us more to revive the NIR, because it has been done for several years,” Zubiri said in a statement. INQ