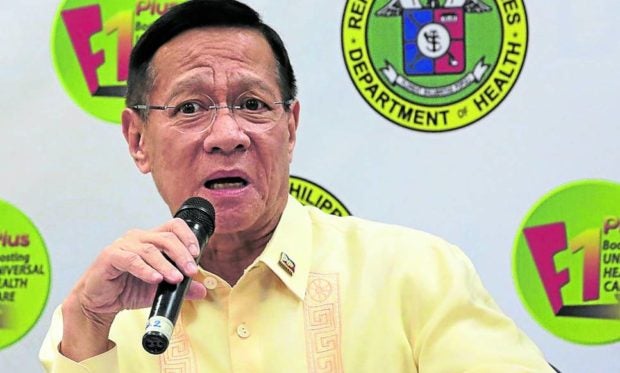 MANILA, Philippines — Former Health Secretary Francisco Duque III clarified on Sunday that he was the one who sought a special audit and even provided the necessary documents to the Commission on Audit (COA) as required by multilateral banks which loaned some $2 billion to the government for its COVID-19 vaccination program.

In a message to the Inquirer, Duque refuted the claim of new Commission on Audit (COA) Chair Gamaliel Cordoba who said last week that the former health chief had withheld documents on vaccine procurement deals because of nondisclosure agreements (NDAs) between the Department of Health (DOH) and vaccine manufacturers.

Duque also said he wondered why his successor, DOH officer in charge Maria Rosario Vergeire, had left out the fact that the request for an audit was made during his term.

He said it was during his watch that the DOH, in a letter signed by then Undersecretary Mario Villaverde, asked the COA to start an audit of the three loan programs extended by the World Bank and Asian Development Bank (ADB).

He gave the Inquirer a copy of a letter dated Nov. 16, 2021, addressed to then COA chief Michael Aguinaldo which said that the World Bank and ADB had required a “special audit” for the funding projects in the spirit of “accountability and transparency.”

“This, I hope, will set the record straight and debunk any misnomer and unfair portrayal of me as refusing to submit vaccine procurement to COA for audit,” Duque told the Inquirer.

He also questioned why Vergeire did not say when the DOH had sought an audit, saying it was “lamentable… [that] this important piece of info” was left out.

“Though she emphasized it was DOH that requested… an audit, [she] did not mention the very important timeline of Nov. 16, 2021, when the letter was sent when I was still very much the SOH (secretary of health) until June 30, 2022,” Duque said.

In his confirmation hearing before the Commission on Appointments last Tuesday, Cordoba disclosed that Duque had written COA that the DOH could not release the vaccine procurement records due to NDAs.

But on Friday, Vergeire contradicted Duque and cited exemptions in the agreements which stated that the documents could be shared if required by law or as part of the process for auditing or investigation.

The legal team of the DOH was also studying the matter to avoid possible breach of contract, she added.

As of the end of 2021, the government had borrowed $2 billion, or about P100.5 billion, including $650 million in loans from the HEAL funding project and another $900 million under the PCERP, for its COVID-19 vaccination program.

Some 44 million doses were reported to have gone to waste due to expiration and mishandling, with the losses earlier estimated at around P15.6 billion. But Vergeire said only about 2 percent of the wastage were from the inventory of the national government with the majority, or 75 percent, coming from those of the private sector or local governments.

Sen. Francis Tolentino, meanwhile, said the Senate would proceed with its inquiry into the government’s vaccine procurement deals despite Vergeire’s assurance that the DOH would submit all pertinent documents to the COA.

“The people should know how these funds were used and if these were spent correctly,” he said in a radio interview on Sunday. “This is very important because this is no ordinary procurement. It also involves the people’s health.”

Citing official records, the senator said about P70 billion was released in rolling out the country’s procurement program at the height of the pandemic in 2020.

The DOH should not use the NDAs as an excuse to evade scrutiny, Tolentino said, adding that these were usually valid for up to two years and covered only the commercial interest and “trade secrets” of a private company.

“We’re not interested in copying their patent or process, but just the price [of the vaccines]… because public funds were used for the purchase,” he said.

The senator affirmed that the NDAs may be made public upon the request of “lawful authorities” such as the Senate blue ribbon committee or the COA.

Tolentino said examining the vaccine procurement documents would help authorities determine if there was truth to speculations that the purchased jabs were overpriced.

This would also guide the government in securing better deals for vaccines to be procured in the future, he said.

“Now that [the DOH] is saying that there’s a wastage of 44 million doses, the people should know the price per dose,” Tolentino said.

“These can be audited by COA. Congress should also be informed about this,” he added.