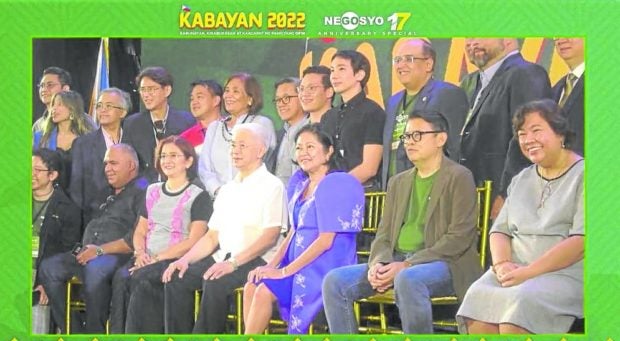 A HELPING HAND Go Negosyo’s 17th anniversary on Saturday celebrates the contributions of overseas Filipino workers (OFWs) and micro, small and medium enterprises to the nation. The group’s founder, businessman Joey Concepcion, thanked President Marcos (who did not make it to the event) and first lady Liza Araneta-Marcos, for their unwavering support for the two sectors. In his message read by Trade Secretary Alfredo Pascual, Mr. Marcos said OFWs remained “a solid foundation of our economy.” —SCREENGRAB FROM GO NEGOSYO FACEBOOK

MANILA, Philippines — Working abroad will hopefully become “a choice rather than a necessity” for Filipinos in the future, according to President Ferdinand Marcos Jr., as he promised more job opportunities in the Philippines.

In the meantime, the administration shall ensure that overseas Filipino workers (OFWs) would obtain the “skills that the global workforce requires,” the president said in a speech delivered on his behalf during the celebration of Go Negosyo’s 17th anniversary in Pasay City on Saturday.

There was no immediate explanation from Malacañang for the President’s absence at the event, which had been on his official schedule.

First lady Liza Araneta-Marcos, however, showed up to present the P200,000 cash gift from the Office of the President to each of the nine winners of the Kabayan Awards 2022, who were chosen by Go Negosyo for their “compelling journey as migrant workers, for successfully transitioning to entrepreneurship, and for using social media to become influencers to the overseas Filipino community.”

P2.5M in cash and other prizes

The cash award was part of the total P2.5 million in prizes handed out to lucky attendees by Go Negosyo and its partners to mark its anniversary.

The Kabayan Awards is part of the Kabayan 2022 Summit, Go Negosyo’s initiative to “provide business opportunities and investment matches” for migrant workers.

“We thank the President and the first lady for their unwavering support of OFWS and MSMEs (micro, small and medium enterprises),” said Go Negosyo founder Joey Concepcion.

“Over the 17 years that we promoted entrepreneurship in the Philippines, we found that many of the MSMEs we helped grow were the ventures of OFWs who dream of a life of financial security for their families back home,” he said.

“OFWs and MSMEs will be the ones helping guide our economy, and digitalization will be an advantage to many MSMEs in developing their businesses,” he said.

While MSMEs and OFWs can be catalysts of growth, “they will need the help of our big brothers,” Concepcion said, referring to the country’s top corporations.

“Us big brothers will have that responsibility to help our MSMEs and our OFWs have a chance to make it big in the Philippines,” he added.

In his message read by Trade Secretary Alfredo Pascual, the President said OFWs remained “a solid foundation of our economy, ensuring the generation of remittances to support your loved ones and keep our country afloat.”

Leaving no OFW behind

“Your contributions to the Philippine economy and labor force, in general, are crucial elements to our trajectory toward lasting prosperity,” he said.

Marcos said the administration was working to make entrepreneurship an avenue where the government could help OFWs and their families generate additional income to support their needs.

“We hope that through entrepreneurship, our OFWs will now have the option to come back home with the ultimate goal of making working abroad a choice rather than a necessity,” he said.

Concepcion assured the President of the private sector’s commitment to helping the government in the fight against poverty “so that together we will realize a dream of bringing greater prosperity to all Filipinos and leaving no one behind.”

In March this year, the Philippine Statistics Authority reported that there were an estimated 1.77 million OFWs as of September 2020.

Go Negosyo’s daylong entrepreneurship forum and mentoring event was especially organized for OFWs and their families. The event drew over 1,000 participants who lined up at the venue hours before the event.

Leaders from the Philippine Franchise Association, Philippine Retailers Association, CARD-MRI and MSME-lending specialist Esquire Financing were poised to take part in a forum on the “three Ms of successful entrepreneurship: money, markets and mentorship.”

DMW to fine-tune role as go-to agency for OFWs