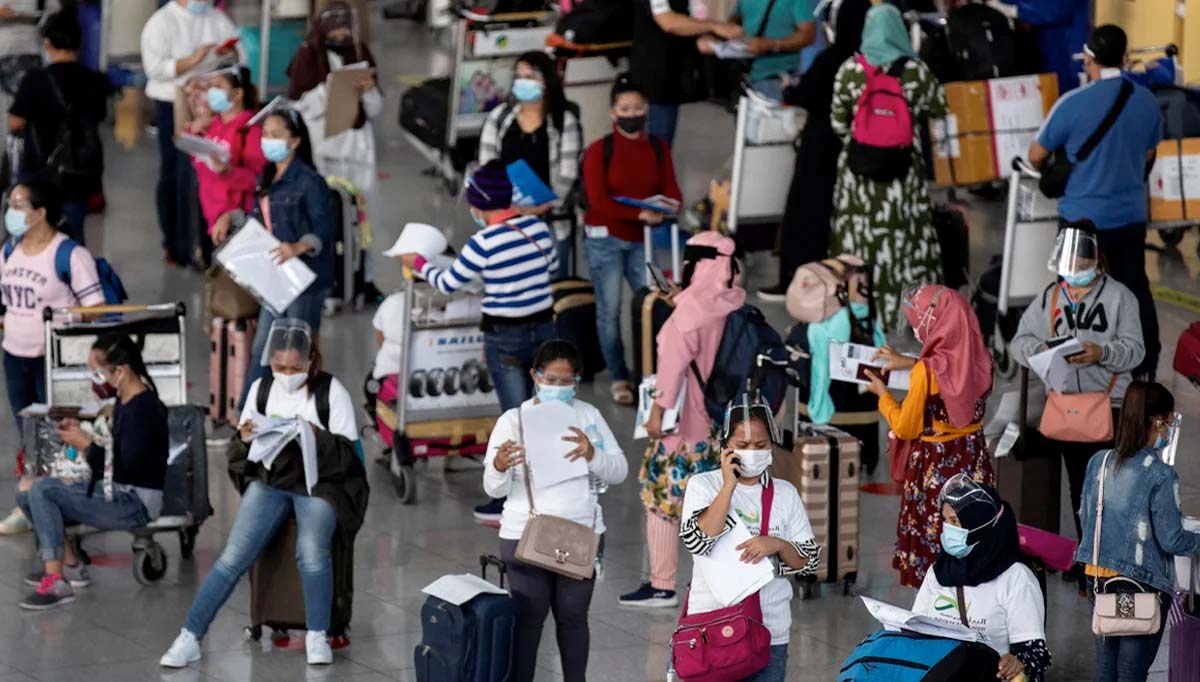 MANILA, Philippines—As the number of repatriated Overseas Filipino Workers (OFWs) continued to increase, concerns grow about the looming uncertainty that they would face at home—including employment and source of income.

For many decades, OFWs leave their families to try their luck and look for better job opportunities across the globe.

However, the ongoing COVID-19 pandemic—as well as other challenges impacting countries—has led to a reverse diaspora and left many OFWs wondering about what will be their next step to provide for their families as they return home.

Over two years into the pandemic, a key question is still begging to be answered—What will happen now to those already home?

Last March 31, 385 Filipinos from Beirut and Kuwait were brought home by Cebu Pacific (CEB) via a charter flight arranged by the Department of Foreign Affairs (DFA) to repatriate distressed OFWs.

“We are happy to support the government in bringing home more kababayans. We are honored to enable them to reunite with their loved ones after such a long time,” said Alex Reyes, chief strategy officer at Cebu Pacific in a statement released on April 4. 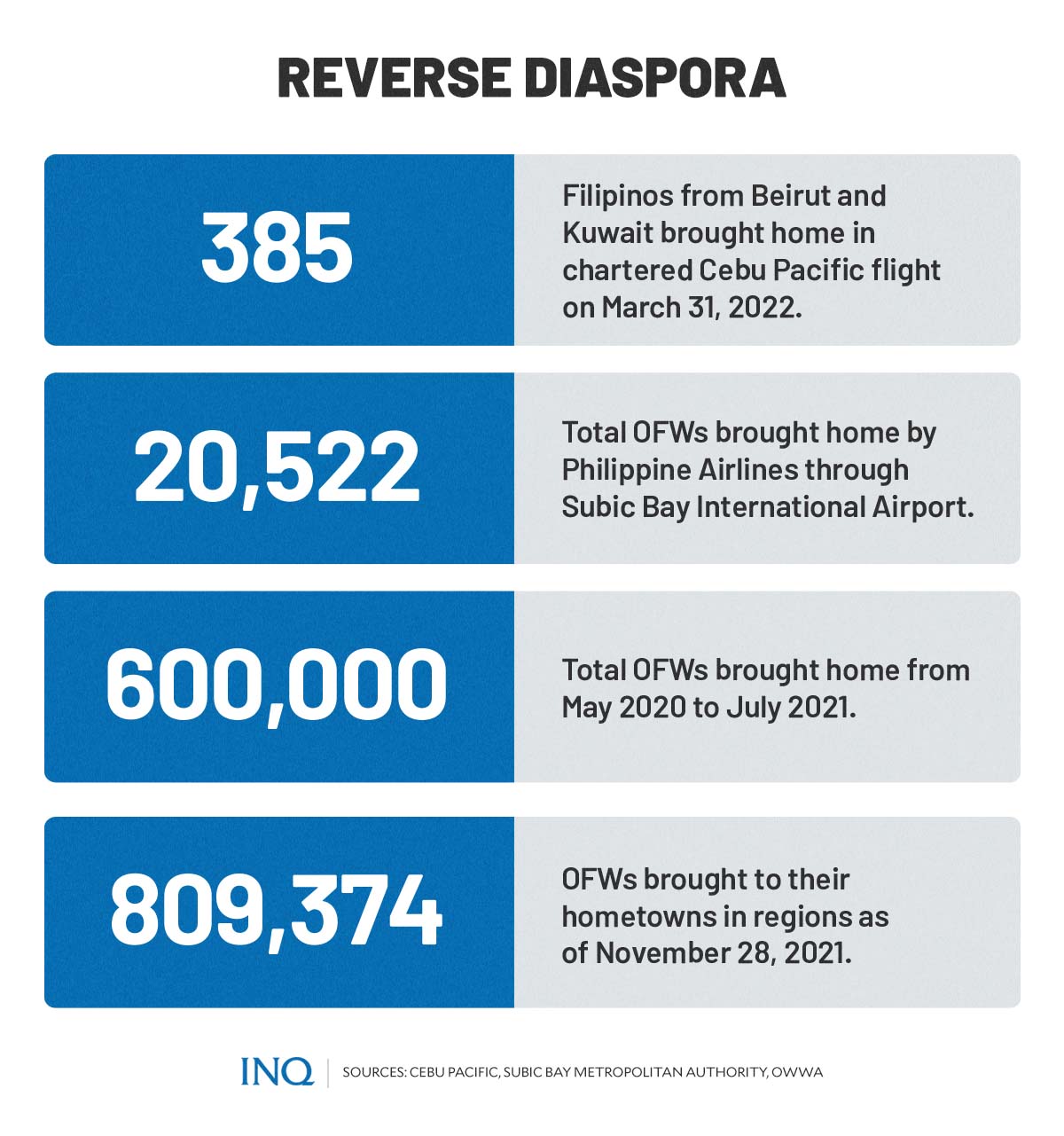 According to CEB, it has repatriated over 11,300 Filipinos from Dubai, Abu Dhabi, Oman, India, Vietnam, Bahrain, Lebanon, and Kuwait through Bayanihan and DFA-arranged charter flights since July last year.

The Subic Bay Metropolitan Authority (SBMA) reported last February 23 that a total of 20,522 OFWs and other returning Filipinos have been repatriated by the Philippine Airlines (PAL) through the Subic Bay International Airport (SBIA). 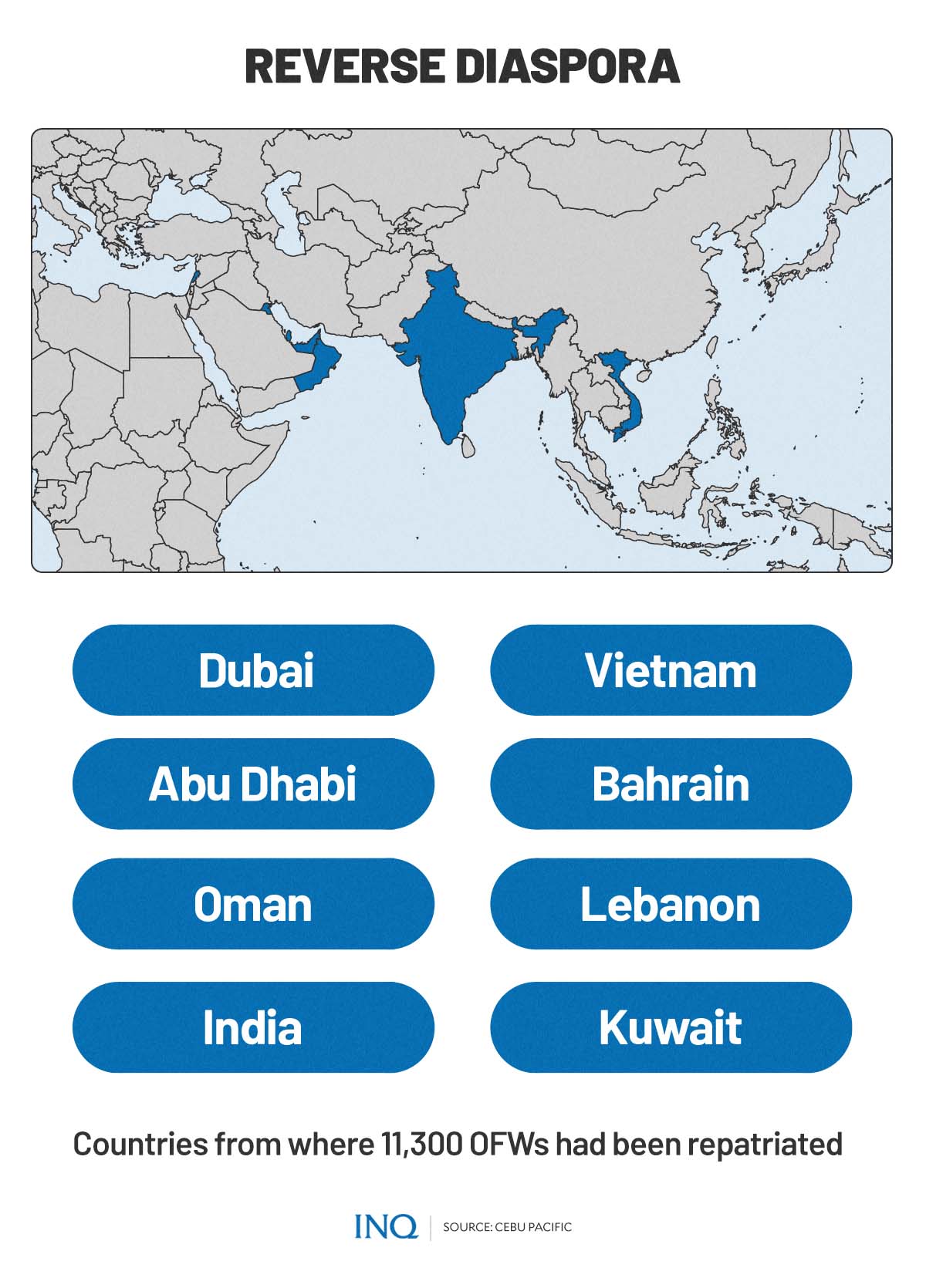 Overseas Workers Welfare Administration (OWWA) Administrator Hans Cacdac said last December that from May 2020 to July 2021, the government has brought home over 600,000 OFWs who lost their jobs amid and due to the ongoing global health pandemic.

As of November 28, OWWA records showed that a total of 809,374 OFWs were transported back to their home regions after undergoing quarantine protocols and receiving assistance from the government.

Most of the repatriates, according to the Department of Labor and Employment (DOLE), are pandemic-affected workers and displaced OFWs affected by lockdowns imposed to curb the spread of COVID-19.

“Many of our OFWs became helpless when the pandemic struck and so the government launched a massive repatriation drive never done before,” Labor Secretary Silvestre Bello III said in a statement.

Last year, Defense Secretary Delfin Lorenzana gave higher estimates of the reverse diaspora. He said that as of June 28, more than 1 million Filipinos had been repatriated or had returned to the Philippines since the pandemic struck.

Uncertainty, however, looms on the horizon for repatriated OFWs as they come home. The biggest question is what jobs are there for them in the Philippines?

Out of the total 8,332 OFWs who arrived in the Philippines during the pandemic by the end of 2020 and have answered the survey conducted by the International Organization for Migration (IOM), 83 percent said they remained unemployed “three months after their return.”

“This came at a time whereby joblessness in the Philippines hit a record-high of 10.3% for 2020 as a direct result of COVID-19 and the associated lockdowns,” the IOM, a United Nations (UN) agency, said in its report released last year. 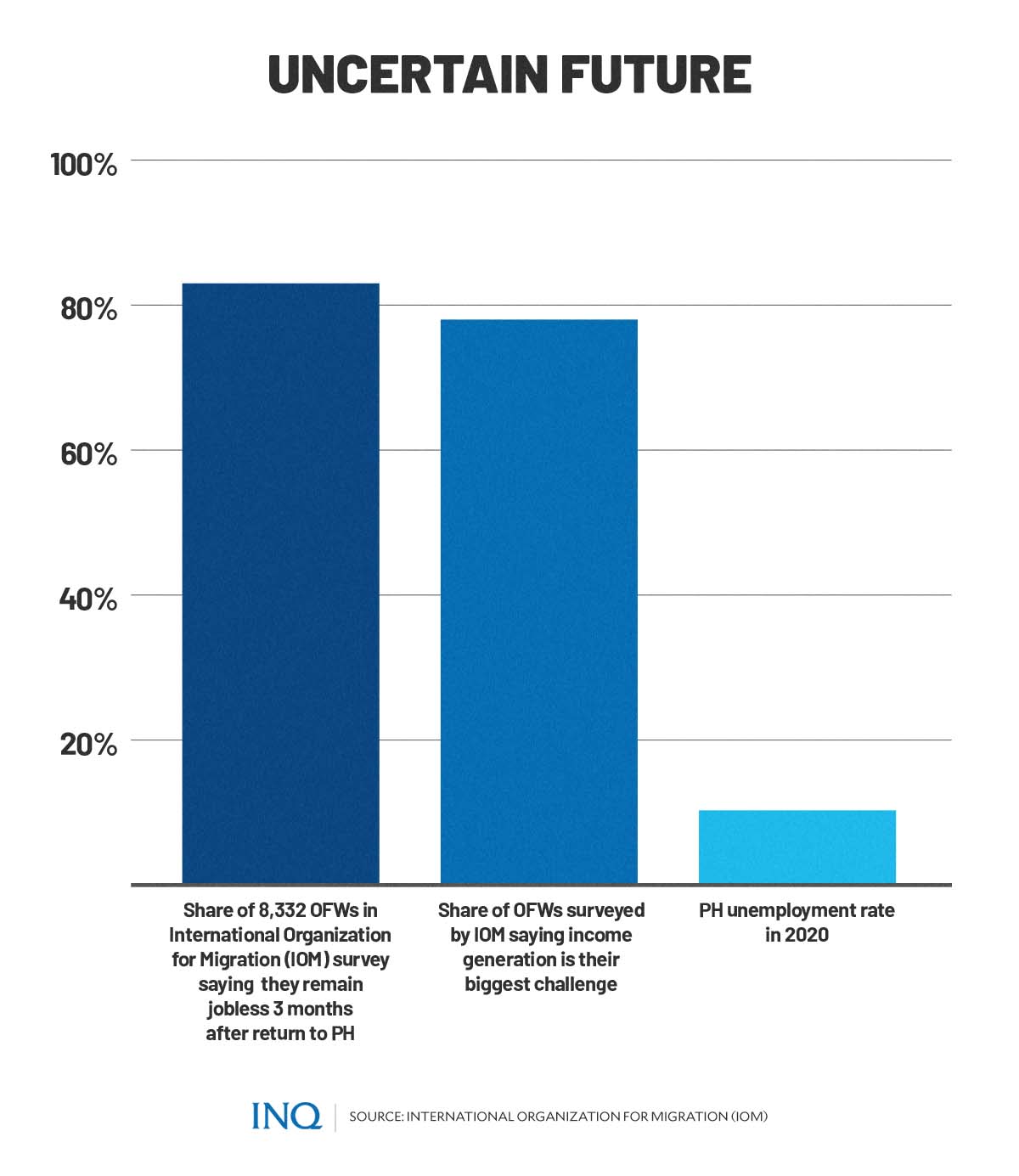 While for some of the respondents, starting a business in their hometown was an option for a new source of income, IOM noted that the striking element is that only 27 percent reported having capital to start businesses.

The IOM report said at least 50 percent of those who said they have no capital would not know how to obtain seed money with more women OFWs saying this.

In a statement last year, Susan Ople, former labor undersecretary and president of the Blas F. Ople Center, listed some of the accomplishments achieved by the Ople Center through its partnership with and Inter-Agency Council Against Trafficking (IACAT) during the Duterte administration, including:

Sen. Joel Villanueva has recently urged the government to craft a national strategy that would tap the talent pool of OFWs who have returned to their families for good.

“This is the brain gain we should be exploiting. There is a social dividend waiting to be earned from this reverse diaspora,” said Villanueva in a statement last March 13.

“I view their return as an enhancement of our labor pool. They’re bringing with them skills they have acquired abroad. Our society must benefit from their experience, and government must show the way,” he added, noting that manpower and mentorship—like in construction—are necessary for post-COVID economic recovery.

Last year, Villanueva suggested the conduct of a general and unified inventory of the skills of repatriated OFWs which can be used to match OFWs with available jobs suitable for them.

The DOLE also offers a psycho-social program as part of its reintegration services, which consists of “capacity-building through assistance in community organizing and maintaining OFW Family Circles (OFCs), and services like psycho-social counseling, stress debriefing, values formation, and financial literacy.”

According to a report submitted by the Philippines to voluntarily comply with the Global Compact for Safe, Orderly and Regular Migration (GCM) review of the United Nations Economic and Social Commission for Asia and the Pacific, the government has integrated mechanisms to synchronize and streamline repatriation and integration of OFWs.

One of these was the Comprehensive OFW Reintegration Program (CORP), a flagship program of OWWA, and the National Reintegration Center For OFWs (NCRO).

The UN review said the program was meant to “strengthen and harmonize the reintegration programs and services provided by various stakeholders.”

Several job offers are also being made available for returning OFWs. These include the entry-level teaching positions at the Department of Education (DepEd) through a program called “Sa Pinas Ikaw ang Ma’am, Sir.”

On top of these, OWWA also offers financial and livelihood support programs for OFWs.

READ: OFWs are back home, what now?

Illegal recruiters know no pandemic, continue to prey on OFWs