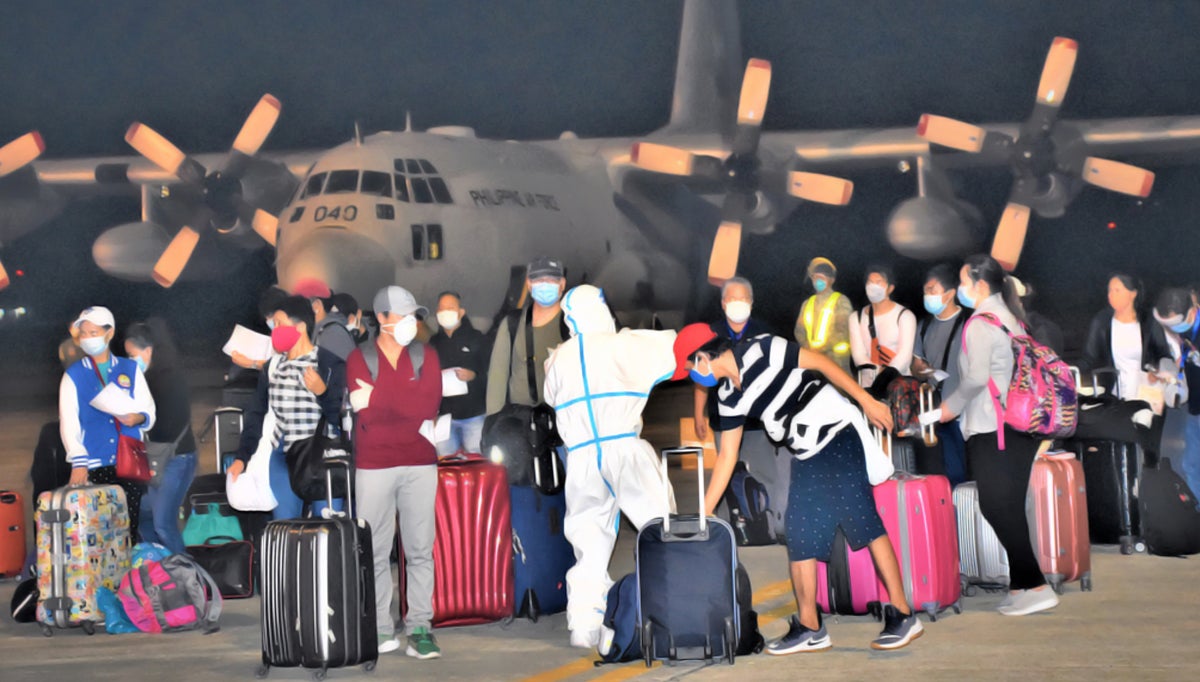 FILE PHOTO: OFWs from Negros Occidental return to the province during a recent repatriation flight by the Philippine Air Force using a C-130. -RICHARD MALIHAN

The picture was presented on Friday in line with this year’s commemoration of World Day Against Trafficking.

The study findings were presented at an online presentation. It was prepared by Alcestis “Thetis” Abrera Mangahas, former deputy regional director of International Organization (ILO) for Asia Pacific.

Impact of the pandemic

“The COVID-19 pandemic has amplified trafficking dangers, loss of jobs, growing poverty, involuntary servitude of seafarers because of the delay of the deployment of their replacements, illegal recruiters taking advantage of the economic needs of the unemployed,” said Justice Undersecretary Emmeline Aglipay-Villar, who is also the undersecretary in charge of IACAT.

“The crisis has overwhelmed social and public services, it has impacted the work of law enforcement and criminal justice systems, and it has made it harder for victims to seek help,” she added.

According to Defense Secretary Delfin Lorenzana last June, a total of 569,159 Filipinos abroad have been repatriated since the start of the pandemic.

“These are OFWs who came home because they were dismissed from their jobs or they were taking a vacation here,” Lorenzana said in Filipino.

A study published by the IOM UN Migration last May gave a closer look at the struggles of OFWs who were repatriated due to the pandemic. 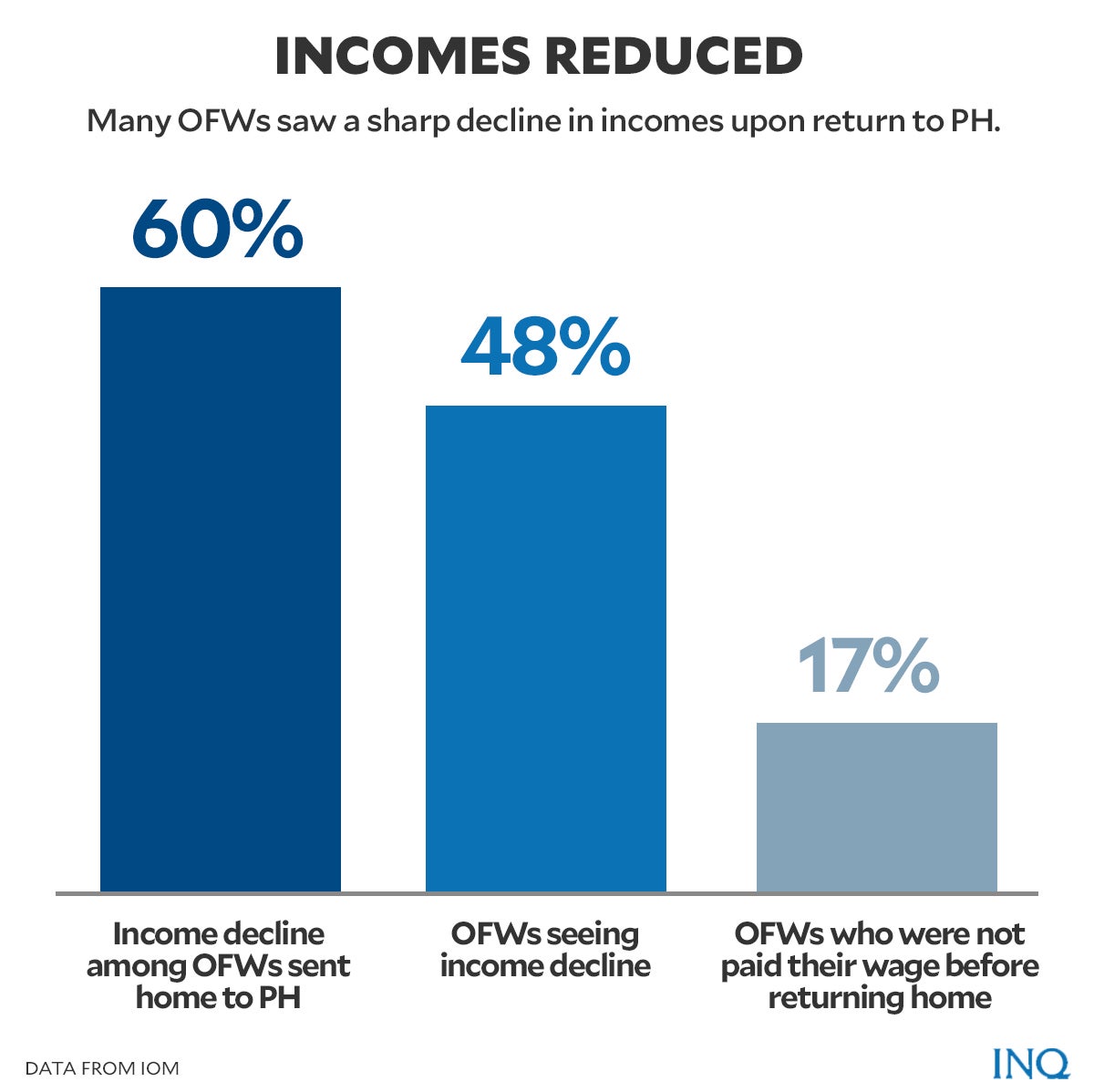 Out of the total 8,332 OFWs who arrived in the Philippines during the pandemic by the end of 2020 and have answered the survey conducted by IOM, 67 percent said their decision to return was impacted by COVID-19.

Of that 67 percent, 30 percent reported that their contract ended and was not renewed due to the pandemic. At least 16 percent were “told to leave the country” by their employer, again due to COVID-19.

Around 13 percent responded that they either could not find work or have lost their job because of the pandemic while seven percent said they and their family in the Philippines were worried because of COVID-19 so they went home.

The IOM also emphasized in the study that an “alarming” 83 percent of the repatriated OFWs remained unemployed “three months after their return.”

“This came at a time whereby joblessness in the Philippines hit a record-high of 10.3% for 2020 as a direct result of COVID-19 and the associated lockdowns,” the IOM report stated. 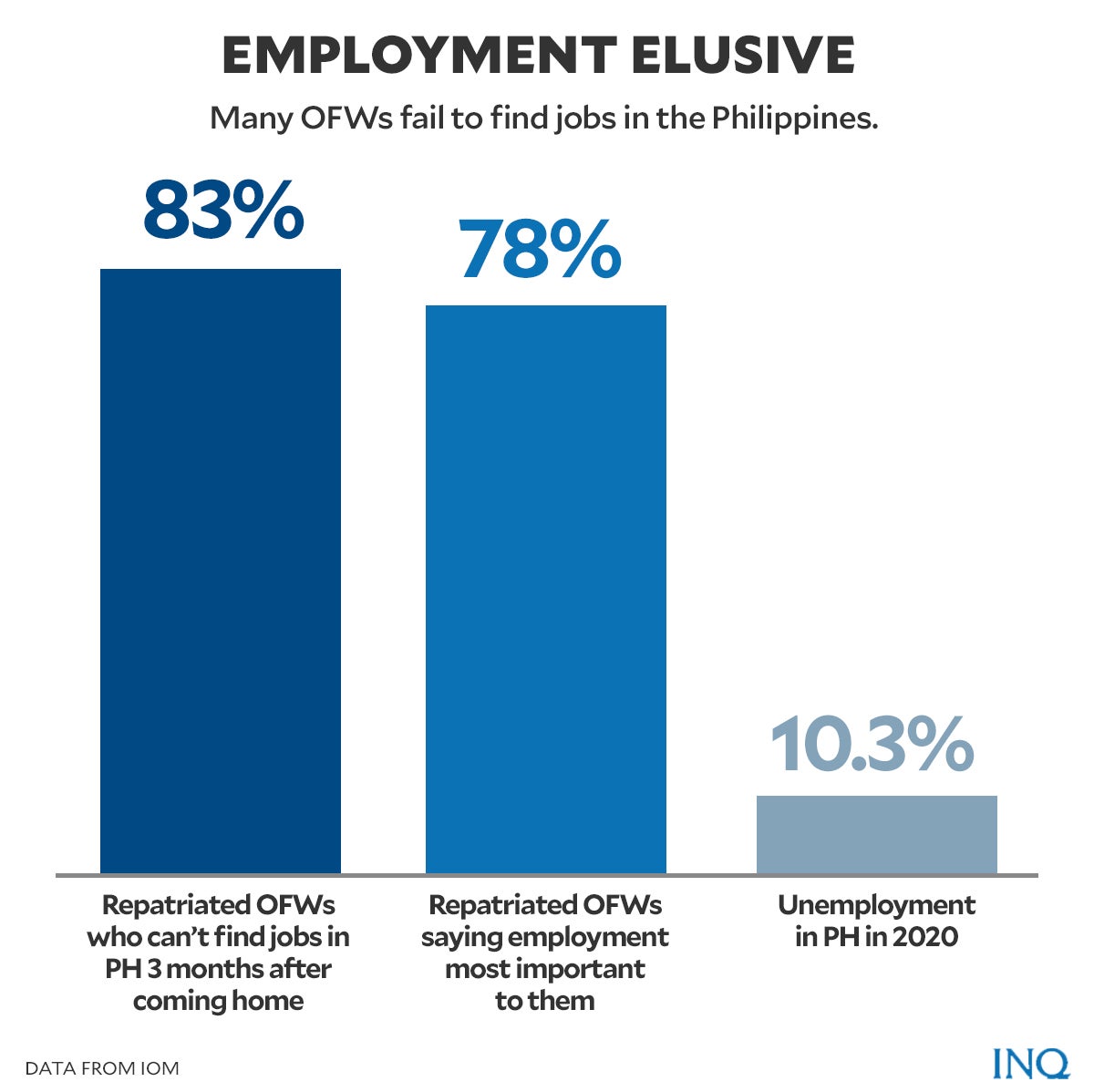 At least 48 percent also said they suffered a 60 percent drop in income after their return to the Philippines. Unfortunately, around 17 percent said they did not receive their salary before return.

Former labor undersecretary Susan Ople, head of the Ople Center, said that among the repatriated OFWs, some may have been unclassified workers who suffered from abuses abroad.

“One of the challenges at the Ople Center is seeing, that the emphasis now, and perhaps more rightly so, would be to repatriate as many OFWs as we can,” she said.

Ople urged the government to take a closer look and review the conditions of OFWs who remain stranded in other countries — especially those who could be potential victims of human trafficking or labor exploitation.

“We hope that our government [will] look at the potential human trafficking victims among the stranded OFWs because they continue to incur expenses and they lose their source of income because they are overstaying in another country,” she said. 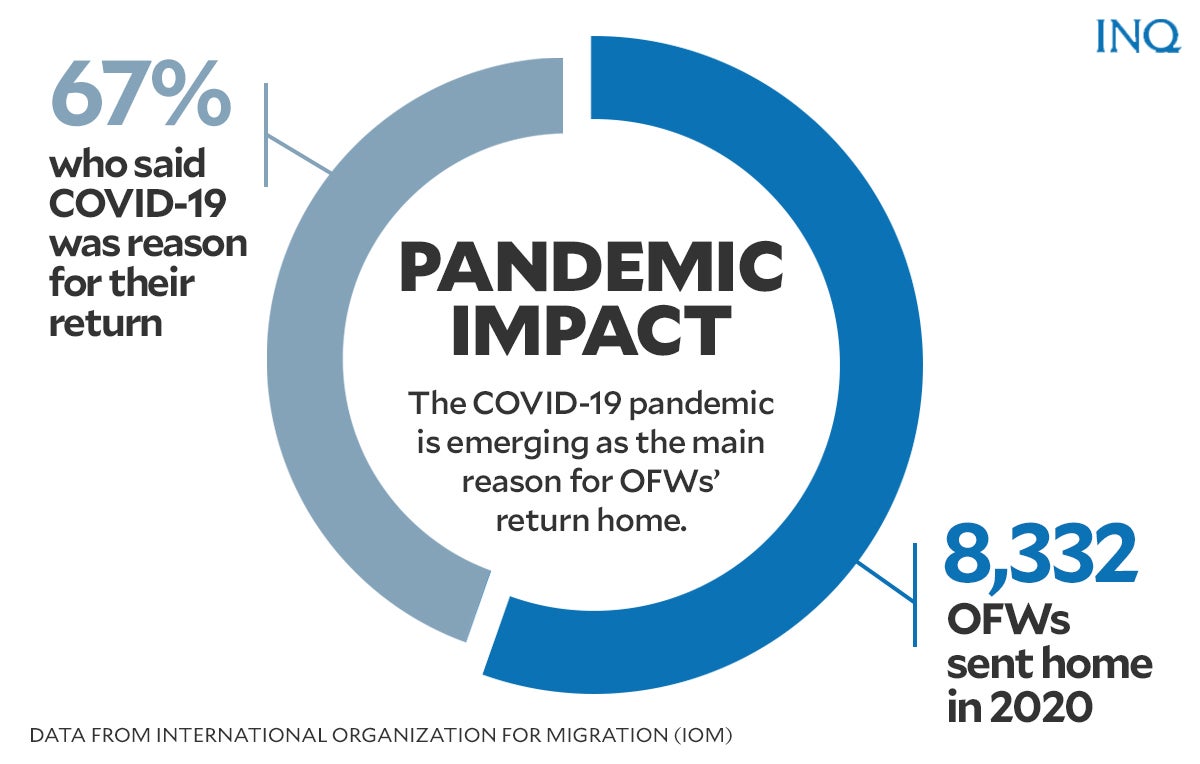 OFW “vulnerability to human trafficking increases day by day,” said Ople. “We want to flag that these stranded OFWs are potential victims of human traffickers,” she added.

Aglipay-Villar also warned that illegal recruiters had taken to social media to prey on victims and they are thriving there.

“The rise in online interactions are increasing the vulnerabilities and opening up opportunities for organized crime groups,” the justice undersecretary said.

Ople said those who fall prey to human traffickers online are considered among the “silent victims” amid the pandemic.

Mangahas explained that while the data used in her study were collected before the COVID pandemic, these shed light on the long-standing facts on many issues that are facing OFWs until now.

These can also help emphasize the need to address the cases and needs of OFWs.

“What the pandemic did show [was] that some of these cracks, which were clearly seen with the return of the workers, actually they have had a long history of unattended needs,” Mangahas said.

According to her research, almost 24,000 cases of abuse and other cases involving workers in the Gulf Cooperation Council (GCC) have been received by Overseas Workers Welfare Administration (OWWA) in 2020.

The majority or at least 18,002, or 75.05 percent, involved female overseas Filipinos and migrant workers.

The study also detailed the barriers that many OFWs face in attaining justice or progress in their cases.

Despite the increasing cases of violations against OFWs and the ongoing challenge to eradicate such issues, Ople commended President Rodrigo Duterte’s administration for its efforts to aid OFWs in need through IACAT.

For six consecutive years, the Philippines has maintained its Tier 1 status in the US Department of State’s Global Trafficking in Persons Report.

“The Philippines has many challenges in trafficking but that is a recognition that so many people in the Philippines are working so hard every day to address this situation and make it better,” said Alex Thier, CEO of the Global Fund to End Modern Slavery.

Citing data from the Integrated Case Management System (ICMS) platform of the IACAT, Ople said that there were 1,665 cases of trafficking and other forms of exploitation recorded since February 2020 or when the system was launched.

“Years from now, when we look back at this dark era of the COVID-19 pandemic, we will recall with pride how much the government came to the aid of our migrant workers from all corners of the globe, who were impacted by this deadly virus,” Ople said.

Ople, in a statement, also listed some of the accomplishments achieved by the Ople Center through its partnership with IACAT during the Duterte administration:

In a pre-recorded message, United States Embassy Chargé d’ Affairs John Law lauded the achievements of the Philippines and reasserted the US’ effort to help in addressing issues related to OFWs.

“In this, the 75th anniversary of our diplomatic relations with the Philippines, the US reaffirms our steadfast commitment to countering and mitigating the impacts of human trafficking, facilitating justice, and helping victims rebuild their lives,” Law said.

In his last State of the Nation Address (SONA), Duterte told governments of Middle Eastern countries to dismantle the Kafala system which the President described as a form of modern slavery.

“We still have our work cut out for us, and even more so because this pandemic tends to be the dark cloud that shields all evil, and it is our duty to make sure that the good always prevails,” said Ople.

Where do we go from here?

“COVID-19, undoubtedly, is the greatest challenge right now, many people [were] left vulnerable [and] lost their jobs,” said Kristin Dadey, chef of mission of IOM, during the online press conference.

“We still have so much work to do in this campaign and fight against modern slavery,” Dadey added.

According to Ople, there are plans to share the findings in Mangahas’ research to the House of Representatives and Senate as both chambers deliberate on the proposed new department for OFWs.

“There are data here and information, recommendations that may guide them,” she said.

Last May 31, Duterte has certified as urgent Senate Bill No. 2334, a measure to create the Department of Migrant Workers and Overseas Filipinos (DMWOF).

“We are also going to present this research to other stakeholders in the private sectors and civil society,” Ople said.

“It is a continuing part of our awareness and consultative process at the Ople Center,” she added.