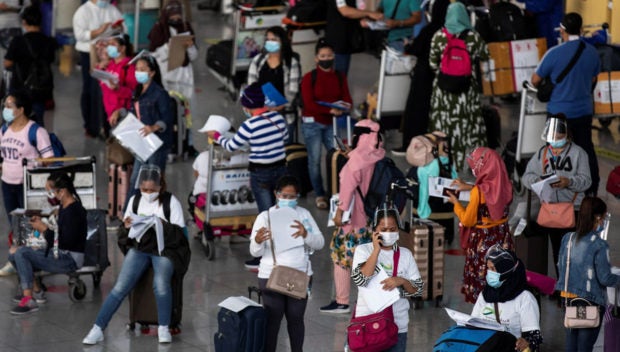 MANILA, Philippines—“We come together to imagine a world in which every person striving for dignity, justice, and prosperity can find decent work and at a fair wage. Where instead of traveling abroad to find exploitation and degradation, they find fulfillment and decency.”

That was a portion of Alex Thier’s message at the online launch of the Philippines’ National Action Plan to Mainstream Fair and Ethical Recruitment (NAP-FER) on Thursday (Nov. 11).

The CEO of the Global Fund to End Modern Slavery, through his message, summarized the vision and end goal of the program, which seeks to promote the welfare and protect the rights of overseas Filipino workers amid continuing cases of illegal, unethical and unfair recruitment practices. 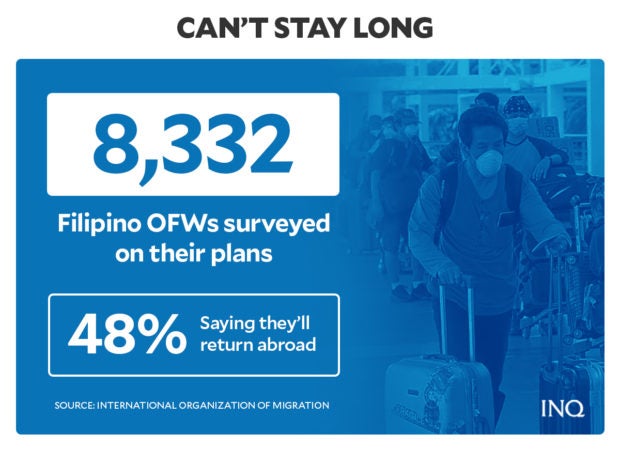 According to a COVID impact assessment report recently released by the International Organization for Migration (IOM) Philippines, of the 8,332 OFW returnees surveyed, almost half, or 48 percent, said they plan to re-migrate.

“It remains more critical than ever that we adopt more effective strategies and measures to protect Filipino migrant workers,” said IOM chief of mission Kristin Dadey. 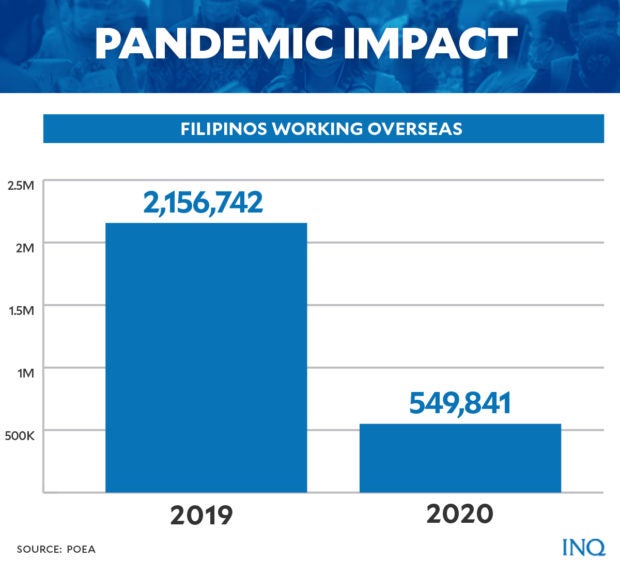 Data from the Philippine Overseas Employment Administration (POEA) also showed that the number of deployed land-based and sea-based Filipino workers has slowly increased from January to September this year. 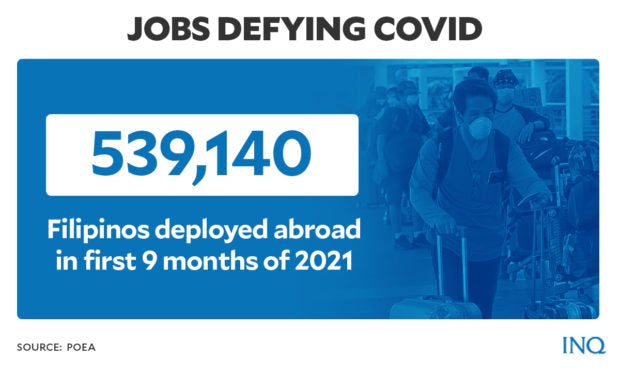 “We know that as the economy is opening up we can see that migration is increasing tremendously, we really want to ensure that fair and ethical recruitment will be key to helping Filipinos make a choice in migrating back abroad,” Dadey said.

While the Philippines, according to Dadey and Thier, has been a model in adopting robust migration policies and frameworks for the protection of workers’ rights and welfare, a program was needed to ensure fair and ethical recruitment in the country.

“When it comes to protecting workers, the Philippines is leading by example,” Thier said.

“This National Action Plan also reflects the Philippines’ commitments as a champion of the Global Compact Migration (GCM) and the Sustainable Development Goals (SDG),” he added.

Among the strategic objectives of the fair and ethical recruitment action plan were:

Advocate further policy or legislative measures to institutionalize fair and ethical recruitment, including strategic approaches for recovery from the COVID-19 pandemic.

According to lawyer Maureen dela Cruz, national project officer of the ALTER (Aligning Lenses Towards Ethical Recruitment) project of IOM Philippines, the national action plan was a result of 15 months of consultation and discussions with the Blas Ople Center, Department of Labor and Employment (DOLE) and umbrella agencies, partners and stakeholders from the private sector, civil society and OFW advocates.

They also coordinated with OFWs, former OFWs and families of OFWs who are active in advocacy groups and civic organizations.

“We compiled some overarching strategic objectives that echo the perspectives of the different sectors and set forth clear priorities on the way forward,” Dela Cruz said.

The framework of the action plan was primarily guided by the “robust legal and policy framework that the Philippines already has as one of the top labor-sending or worker-deploying countries worldwide.”

These include the following:

“Clearly, the Philippines has made a strong statement that the protection of rights and welfare of migrant workers is a policy priority across the board for the relevant agencies and has made international commitments to continue improving the alignment of its laws and policies with existing international standards,” said Dela Cruz.

“This will further enhance and strengthen the measures and the policies in place on the deployment of OFWs through ethical recruitment processes,” Bello said.

“This will also impact as well on the forthcoming review of the Global Compact for Safe, Orderly, and Regular Migration wherein the Philippines was one of the champions that pushed for its adoption,” he added.

It is likewise expected to complement and guide the government in achieving its targets under the Philippine development plan of 2017 to 2022.

Thier said the national action plan—alongside a robust anti-trafficking framework and a well-developed legal system in the Philippines—could help improve the lives and working conditions of millions of OFWs.

“Mainstreaming ethical recruitment plays a key role in preventing and addressing many of the risks that migrant workers face early on in the recruitment process,” said Thier.

One of the goals of the action plan, as discussed at the online launch, was to eliminate the fees which burden OFWs and push workers into debt.

The national action plan, according to Dela Cruz, ensure that employers would instead cover all fees.

“Transparency is needed to make sure that our migrant workers are not being made to pay much more than they should in the guise of administrative expenses,” Nicodemus said.

“We hope that the day will come when employers pay the costs of deployment so that our workers need not borrow money to be able to work abroad,” she added.

The results of the objectives under the national action plan, however, will not appear instantly.

“This plan is meant to be a medium-term plan, so realistically three to five years, but also specific action points have been identified under the seven objectives, we still need to set timelines on that because a lot will still change in the next few months,” Dela Cruz explained.

“We are aware that if we jump the gun, we might be setting targets that might be obsolete in just a couple of months. Definitely, further discussions and workshopping should take place to set specific timelines for key activities,” she added.

“We recognize that in the current realities, some overarching goals might not be doable to achieve overnight. But there are steps that we can take to get us closer to those aspirations.”

Dadey, on the other hand, said that the national action plan will serve as a starting point to promote efforts across different projects and initiatives which could improve the condition of OFWs.

“Our goals are aspirational, we know we won’t get there overnight, but we know we want to get to a point where migrant workers are not paying for their jobs, but the cost is borne by others, by employers,” she said.

“We know fees are associated with migration. We know that. But we want to get to a point where it’s not the migrant workers who are bearing that burden,” she continued.

Dadey, at the online launch, also lauded the government—including President Rodrigo Duterte—for efforts to ensure legal, ethical, and fair recruitment in the country.

“We saw President Duterte’s general assembly speech where he made quite bold statements on eliminating kafala and really protecting migrant workers as the center of his speech recently at the United Nations (UN) General Assembly,” she said, referring to Duterte’s speech last Sept. 21.

Under the kafala system, a migrant worker’s immigration status is legally bound to an individual employer or sponsor, or kafeel, during the contract period.

The migrant worker cannot enter a country, seek other jobs or leave a country without explicit, written permission from the kafeel.

The migrant worker cannot enter the country, transfer employment or leave the country for any reason without first obtaining explicit written permission from the kafeel, who is the source of abuse.

“He was also the only leader to mention the GCM (Global Compact for Migration). The Philippines has made a very very strong commitment to that,” Dadey added, referring to Duterte.

She also acknowledged the Department of Labor and Employment (DOLE), POEA, Department of Foreign Affairs (DFA), and other government agencies.

According to Bello, promoting the welfare and protecting the rights of OFWs in all stages of the migration cycle has been among the government’s priorities.

“We have consistently condemned values recruitment malpractices and meted justice to those who do not abide by the standard provided by the law,” the labor secretary said.

“The policy has been very stringent for placement agencies to follow regulations and ensure that OFWs are deployed in a safe and very legal way,” he added.

“The government’s engagement with stakeholders paved the way for all sectors affected by the changing trend of the migration such as 3rd country hiring and trafficking of persons must be heard and must be assisted.”

Bello also said that the government, through DOLE and POEA, assured that household service workers and other job seekers will not shoulder placement fees or minimum fees.

“With the help of different stakeholders, this TWG is tasked to assess existing policies and rules and regulations in fair and ethical recruitment with the end view of formulating a policy framework that will be implemented by the POEA,” Olalia said at the online discussion.

Included in the tasks of the TWG was to look for ways on incentivizing those who champion and fulfill ethical recruitment practices.

Incentives, according to OFW advocate Luther Calderon of the Kabalikat ng Migranteng Pilipino (KAMPI), should be offered to recruitment agencies that “have the best interests of migrant workers at heart.”

“It is unfortunate that those who have been very selective in choosing their employers to ensure a rights-based approach to labor migration are not being duly recognized, if not encouraged,” Calderon said.

“There are several recruitment agencies that maintain good practices in managing their operations to ensure the utmost protection for our workers,” he continued.

Aside from the government department and agencies, IOM Philippines also recognized the hard work and contribution of the private sector, civil societies, and OFW groups who have helped in the creation of the national action plan.

These included the GFEMS and the Ethical Recruitment Consultative Group (ERCG) which consists of the Blas Ople Policy Center and Training Institute, KAMPI, and KAKAMPI.